As Congress debates the Trans-Pacific Partnership, we speak to Nobel Prize-winning economist Joseph Stiglitz about the trade deal. “The irony is that the president came out and said, 'This is about who makes the trade rules—China or the United States?'” Stiglitz said. “But I think the big issue is, this is about who makes the rules of trade—the American people, our democratic process, or the corporations? And who they’re made for, which is, for the corporations or for all of us?”

AMY GOODMAN: I mean, what’s very interesting is you have Bernie Sanders really stressing inequality. This pushes Hillary Clinton to do this, because he has gained so much momentum and drawn tens of thousands of peoples to his rally. On the Republican side, you have, in some areas, Donald Trump sounding more liberal than Hillary Clinton—immediately came out against these trade deals.

JOSEPH STIGLITZ: Yeah, so, in a sense, what you see both in the Republican and Democratic Party is a sense that something is wrong. You know, America was the first middle-class society. We’re about to become the first society that ceases to be a middle-class society. The basic requirements of being a member of the middle class—the ability to send your kids to school, a secure retirement—all those things are being put in jeopardy. And one of the things we talk about in Rewriting the Rules is how we can get those back. But what you’re seeing on both sides is a sense of anger. Now, I think that both of the Democratic candidates have put forward credible ways of dealing with it. And there’s going to be a long discussion. The problem is that on the Republican side there’s anger, but it’s basically inchoate. You know, it’s basically tax reforms that actually rewrite the rules in the wrong way, making things even more unequal than we have and the numbers not adding up.

AMY GOODMAN: In Part 1 of our conversation, we talked about the TPP, the Trans-Pacific Partnership trade deal that President Obama has really championed. What would—what grade, as a college professor, would you give President Obama, who actually went to Columbia University, where you’re a professor, when it comes to these issues? You’ve called the trade deal a “charade.”

JOSEPH STIGLITZ: Well, unfortunately, you know, he’s done some things that—he did not support some of the basic reforms in the financial sector that I think were needed. TPP, I think, is a very big mistake. On the other—

AMY GOODMAN: It means corporations control trade, as opposed to democratic societies and their governments?

AMY GOODMAN: For people who don’t understand TPP, explain who makes the decisions around these global trade rules. This will control what? Forty percent of the global economy?

AMY GOODMAN: You don’t think he understands it, or he—

JOSEPH STIGLITZ: I think he wants to chalk up some kind of an achievement, i.e. he can’t pass anything through Congress because the Republicans won’t allow him, so he has to get something that the Republicans want. And they want a trade agreement. The provisions about—in the TPP about investment, about—are the kinds of provisions that were number one in the agenda of the Business Roundtable. And so—

AMY GOODMAN: And explain what the Business Roundtable is.

JOSEPH STIGLITZ: This is the group of the big—America’s biggest corporations.

JOSEPH STIGLITZ: It’s not the mom-and-pop stores. So this is about big business being able to protect themselves. But let me make it clear: It’s not about property rights, as we usually understand it. You know, what the USTR says, they say, “Well, we’re dealing with countries where we can’t trust the way the legal system works, so we have to put these protections in, because these countries just can’t be trusted.” We’re insisting on the same kind of provision in our trade agreements with Europe, with Germany. And the Germans are saying, you know, “We have just as good a legal system as yours, and why are you trying to go beyond our legal system?” I mean, for instance, there, they care about GMO. You know, they care a lot about various kinds of—

JOSEPH STIGLITZ: And they say, you know, “We want at least the consumers be informed. They can make a choice.” And if this gets passed, if you pass the regulation that says you have to display, and Americans—and people say, “I’m not going to buy a product that’s GMO,” they can be sued, because of—

AMY GOODMAN: If you put the label on, just informing people that there may be GMOs in this product, you can be sued.

JOSEPH STIGLITZ: You could be sued. Now, we don’t know—let me make it clear: We don’t know all the provisions. They kept it secret. But you have to say—

AMY GOODMAN: And how do they get away with keeping it secret?

JOSEPH STIGLITZ: Well, that is the amazing thing. You know, this was—their argument again is they have—you know, these are negotiations, very complex, and if everything were open, everybody would be—you know, it would be a mess. But they haven’t really kept it secret, because they’ve talked to the corporations. The corporations have been there at the table saying, “Well, it’s really important for us to have this provision. It’s really important for us to have that provision.” But ordinary citizens have not been at the table. You know, the only way that we know what’s going on is leaked documents. And some of the links come from other countries, where there’s a stronger democratic commitment to more transparency. But our government has been keeping it much more secret.

JOSEPH STIGLITZ: Well, all these things are about rewriting the rules. I mean, our basic idea is that over the past 35 years we’ve rewritten the rules in ways that have weakened labor power, increased the financial sector power. There’s been a rebalancing of the power in the wrong way. And TPP—

JOSEPH STIGLITZ: President Reagan, but he was part of a zeitgeist, because you see it in Europe going on at the same time. And let me just say, TPP is another example of rewriting the rules in the wrong way. It’s a continuation of that trend that began back in around 1980 that has increased the imbalance and made things more difficult. So what we need to do now is to rewrite the rules once again, but this time, you know, we’re in the 21st century: It’s not going back exactly to where we were before 1980; it has to be modernized. But realize that we rewrote the rules in ways that destroyed the kind of balance of power that we had.

AMY GOODMAN: So if you were in charge of writing a Trans-Pacific Partnership trade pact that helped people, the vast majority of people, what would be the rules of this TPP?

JOSEPH STIGLITZ: Well, one thing that we haven’t talked about is—one of the most controversial aspects is access to generic medicines. You know, ordinary people need to be able to get medicines at a low price. We struck a balance in the United States in the Hatch-Waxman Act, where we said, “OK, Big Pharma has to be able to get some returns for their investments and research.” But—mostly research really goes on in the universities, let’s be clear, and at NIH government-sponsored research labs. But the generic medicines, which are now more than 80 percent of all drugs, bring the prices down. That’s the competition that makes the market work. Well, we struck that balance, but in this trade agreement they’re trying to restrike the balance in favor of Big Pharma. You know, this is—we were talking about President Obama’s legacy. One of his big legacy is Obamacare, and that’s supposed to bring access to medicine. But when you—TPP will go in exactly the wrong way, because it will restrict access to medicine for many countries around the world. So, that’s one thing.

But take the investment agreement. I would do two things. First, it seems to me that the conditions under which you can sue are wrong. If a country passes a regulation, whether it’s for health, safety, the environment or managing the economy, you shouldn’t be able to sue. These are called regulatory takings. And repeatedly our courts have said it’s the basic right of a country to design rules to protect their citizens, protect their economy, protect their environment. So the conditions under which you can sue are wrong. Who can bring a suit is wrong. It should be government to government, not corporations suing a government.

And thirdly, the judicial process by which it’s done, it shouldn’t be in private courts. The most important—one of the most important public functions is dispute resolution. When we created the WTO, we created an international panel for dispute resolution. We could do the same thing for investment agreements. But instead, they’ve decided to go to very expensive private arbitration, rife with conflicts of interests, you know, so expensive that—I referred earlier to the Uruguay, where Philip Morris is suing.

AMY GOODMAN: Altria, is it called?

JOSEPH STIGLITZ: Altria, you know, the successor to Philip Morris. It’s so expensive that Uruguay can’t pay for its own defense. And Mayor Bloomberg, who is so concerned about smoking, is paying—is contributing to the support of Uruguay to defend itself against Altria, which is just passing regulations to try to protect people’s health.

AMY GOODMAN: Nobel Prize-winning economist Joe Stiglitz, author of Rewriting the Rules of the American Economy. We’ll be back with him in a moment.

WATCH MORE
Our Economy Is Not Working: Joseph Stiglitz on Widening Income Inequality & the Fight for $15

NEXTStiglitz: Sanders is Right–Everybody Has the Right to Healthcare, Sick Days and Family Leave 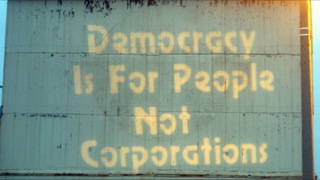