Ithaca Students Call for President to Resign After Racist Incidents

At Ithaca College in upstate New York, up to 2,000 faculty, students and staff staged a walkout on Wednesday to call for the resignation of President Tom Rochon. The students lay down on the rainy walkways in a mass “die-in.” They expressed solidarity with students on other campuses across the country.

Brittany Gardner: “All over the nation, both on and off college campuses, we have seen those young and old fighting against injustice. We stand here in solidarity. Our hearts are heavy with the pain of Mizzou and Yale and Smith and every person of color on a college campus simply because of the color of their skin and the texture of their hair or their ancestry. This is a problem of the nation. However, how can a campus dedicated to preparing us for the real world not actively foster growth to our consciousness of oppression and privilege?”

The protesters at Ithaca College accuse President Tom Rochon of responding inadequately to racist incidents, including one where an African-American graduate was repeatedly called a “savage” by two white male fellow alumni. The incident took place during a panel discussion in October, when Tatiana Sy said she had a “savage hunger” to succeed. J. Christopher Burch, chief executive of the investment firm Burch Creative Capital, then repeatedly called her a “savage,” saying, “I love what the savage here said.” In this clip, you also hear the panel moderator, former NBC News correspondent Bob Kur, pointing to Burch and saying, “You are driven,” then telling Sy, “You’re the savage.”

Tatiana Sy: “That was only because I was—I had like this savage hunger to make it happen, but it wasn’t without learning the risky lesson of balance.”

J. Christopher Burch: “I love what the savage here said.”

Bob Kur: “You’re driven and have been driven since college. You’re the savage, and you were driven.”

J. Christopher Burch: “What empathy means is actually caring deeply for other people’s personal pain, and so as this young—as this savage sits here…” 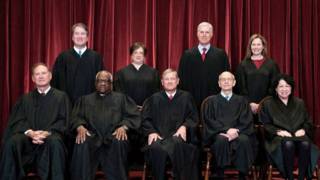