Part 3: Nick Turse on How Secret U.S. Drone Outposts Create Ill Will in Countries Across Africa

Journalist Nick Turse talks about his new investigation into secret U.S. drone outposts across Africa. While U.S. Africa Command maintains there is only one U.S. base on the continent — Camp Lemonnier in Djibouti — Turse says there are actually dozens of U.S. military outposts and access points all across Africa. “People on the ground in these countries, they know what’s going on, generally, even if people in the United States are blind to it,” Turse says. “And I think it creates a lot of ill will.”

Click here to watch Part 1 and Part 2 of the interview.

AMY GOODMAN: This is Democracy Now!, democracynow.org, The War and Peace Report. I’m Amy Goodman. Our guest is Nick Turse, who is managing editor of TomDispatch.com. His most recent book is called Tomorrow’s Battlefield: U.S. Proxy Wars and Secret Ops in Africa.

You’ve just written a new piece in TomDispatch about the bases we don’t know about in Africa. Tell us.

NICK TURSE: Right. If you listen to U.S. Africa Command, AFRICOM, what they say is that there’s one U.S. base on the continent: Camp Lemonnier in Djibouti. And for years they’ve held to this. Earlier this year, the commander of AFRICOM, General David Rodriguez, admitted that there are also 11 what he calls CSLs, contingency security locations, on the continent. AFRICOM will not call these bases. They’re basically staging areas, in their mindset. And they’re prime for a rapid expansion. But beyond, you know, these sites, Africa Command says that there’s no other permanent U.S. presence on the continent. You know, for the last year, basically, I’ve dug into this. It’s something I’ve covered in the past, and I wanted to see exactly what the U.S. footprint in Africa looks like today. And what I was able to come up with was a list of a little more than 60 sites, outposts, access points, that have been set up all across the continent, north to south, east to west. We’re talking about small special ops bases, austere airfields that are used to fly drones out of, staging areas so that the U.S. can send rapid response forces from Europe onto the African continent. And, you know, this is going on all over.

AMY GOODMAN: Where are they?

NICK TURSE: Well, there are outposts right now in Algeria, Botswana, Central African Republic, Chad. There was a small site in South Sudan, in Democratic Republic of Congo, Ethiopia, a couple of small drone bases in Somalia—not just Camp Lemonnier in Djibouti, but another smaller airfield used to fly drones out of, called Chabelley Airfield. There’s an access point in Namibia. They’re basically continent-wide coverage, in one form or another, from port facilities that service U.S. ships to a major base like Camp Lemonnier in Djibouti and all things in between.

AMY GOODMAN: How did the U.S. have this—well, the one they say publicly, this base in Djibouti?

NICK TURSE: It was a former French Foreign Legion outpost, actually. And when the U.S. moved in there, shortly after 9/11—it was in 2002—they set up a—you know, a very austere camp, and they said that it would be a temporary facility. Now, it’s expanded to almost 600 acres, from that original 88. They built up a very large special operations compound. Drone operations really outgrew the base, so they were moved elsewhere, but we have manned aircraft there flying out of there on a constant basis, surveillance aircraft, fighter jets, F-15s.

AMY GOODMAN: What are your concerns with U.S. presence in Africa, as it stands now?

NICK TURSE: Well, I think there’s always a real worry about blowback, to use an old CIA term of tradecraft. And what blowback traditionally was, was the U.S. special operatives conducting operations abroad unbeknownst to the American people, and then repercussions from them blowing back on America, but the U.S. public would be blind to it, because these operations went on unbeknownst to them, even though it was their government and their tax dollars paying for it. And I think this is—this is the problem with secret expansions of this type in Africa. We’ve gotten ourselves involved in all sorts of conflicts that were generally localized, to begin with, but we create enemies there. And we know that these enemies tend to spread, and then they tend to take the fight to U.S. interests elsewhere in the world, so people suffer.

AMY GOODMAN: So do you think it causes—it is a—the U.S. presence is a threat to U.S. national security?

NICK TURSE: I think it is, because we’ve seen a proliferation of transnational terror groups on the continent at the very time that the United States is trying to combat that, that we put in the money, put in the bases, we’ve put in the troops, all to stop the spread of terror, but, you know, at the very same time, we’ve seen terror groups spread all over the continent. Now, you know, correlation doesn’t mean causation, but it’s something that we really have to think about.

AMY GOODMAN: And do you also see a U.S. presence as a threat to these countries’ national security?

NICK TURSE: I think so, because, you know, people on the ground in these countries, they know what’s going on, generally, even if people in the United States are blind to it. And I think it creates a lot of ill will. If you look at the place where we have an avowed base, Djibouti, which is a Muslim nation, one reason that the drone operations were moved out of Camp Lemonnier to another site was that Djiboutian air traffic controllers controlled the airfield there, because it’s a civilian airport and a military airport. It’s the same runway. They were so incensed by the drone operations that were going on there, they were creating unsafe conditions for the U.S. military and for international flights that were coming in. So there are all these unseen repercussions that go on all around the world.

AMY GOODMAN: How would the U.S. win hearts and minds? What is an alternative strategy in Africa, if you believe that the U.S. should be there at all?

NICK TURSE: Well, I think that if the U.S. wants a presence on the continent in some way, I think it has to be upfront, transparent about what it’s doing, and I think the military really needs to be de-emphasized. If you look back over the last decade, this hasn’t been successful in any way. You know, we talked about the Chinese influence on the continent with economics. The Chinese have brought projects, brought money, but, you know, they haven’t done much for labor rights there, they haven’t done much for the environment. These are things that we could do—sustainable development, that type of thing. If the U.S wants to be on the ground there, I think that would be a much better usage of funds.

AMY GOODMAN: Nick Turse is a fellow at The Nation Institute, managing editor of TomDispatch.com. His most recent book, Tomorrow’s Battlefield: U.S. Proxy Wars and Secret Ops in Africa. And we’ll link to his articles right here at democracynow.org. I’m Amy Goodman. Thanks so much for joining us. 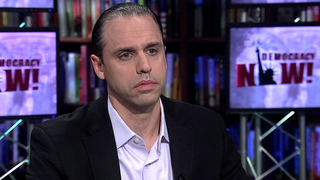