Former Air Force pilot Brandon Bryant is one of the the first U.S. drone operators to speak out against President Obama’s global assassination program. Bryant served as a sensor operator for the Predator program from 2007 to 2011, manning the camera on the unmanned aerial vehicles that carried out attacks overseas. After he left active duty in the Air Force, he was presented with a certificate that credited his squadron for 1,626 kills. We hear Bryant’s recounting of his first-ever lethal drone strike and the impact it continues to have on him today.

StoryNov 20, 2015From Console to Trigger: How Pentagon “Exploits” Video Game Culture to Wire Youth for War

AMY GOODMAN: I want to go to a clip from the film Drone of our guest Brandon Bryant talking about his first fatal drone strike.

So we’re looking at this thing, these people, and it was like almost instantaneous that someone was like, “Confirmed weapons. Here’s the nine line. You’re cleared. You’re cleared hot.” And we fire the missile. And the safety observer is counting down. He counts down to zero, and he says, “Splash!”

And I watched this man bleed out. The missile had taken off one of his legs right above the knee. And I watched him bleed out of his femoral artery. And he’s rolling on the ground, and I can—I imagined his last moments.

I didn’t know what to feel. I just knew that I had ended something that I had no right to end. But I swore an oath. I did what I was supposed to do. I followed through with it. It was like my image of myself was cracking and breaking apart. And the safety observer laughs, and he slaps me on the back, and he says, “You should have seen how you jumped when I said, 'Splash.'”

BRANDON BRYANT: No. I killed 13 people with a total of five Hellfire missile shots, and only three of them were actual combatants.

AMY GOODMAN: Who were the others?

AMY GOODMAN: You testified in the German Parliament, and you said also—you’ve testified before the United Nations?

AMY GOODMAN: That you don’t know if you might be picked up for war crimes, but you’re willing to risk this now.

BRANDON BRYANT: Correct. I think that it’s completely unfair that we helped prosecute German Nazis in World War II who were just following orders, and we can’t put ourselves under that same umbrella. We helped create this current system, the international court system, and we are unable to hold ourselves accountable for our own actions. I think that’s completely unfair to the rest of the world.

JUAN GONZÁLEZ: And hours after you testified at the German Parliament, military showed up at your family’s house in Montana?

JUAN GONZÁLEZ: Could you talk about that?

BRANDON BRYANT: Yeah, they’ve—that was the second time that they had approached me, officially, actually. The first time, I was in Seattle getting healthcare at the VA, and they were like, “Mr. Bryant, this is the FBI. You’re not in trouble.” And then they told me that I was on the ISIS kill list and that I should stop my social media and stop “bragging” on social media, which means that they didn’t even read my social media stuff. And then, right after I testified in front of the Bundestag, the OSI, Air Force Office of Special Investigations, appeared at my mother’s house and told her that she was on this list. And previously, my dog had been attacked twice, as well. And it’s—I believe that these are intimidation tactics. And, you know, my mother is the strongest person that I’ve met, and she told me that she believes in what we’re doing and that I should continue. And there’s no reason that I should not.

Exclusive: 2 Air Force Vets Speak Out for First Time on Why They Want the Drone War to Stop

NEXTExclusive: 2 Air Force Vets Speak Out for First Time on Why They Want the Drone War to Stop 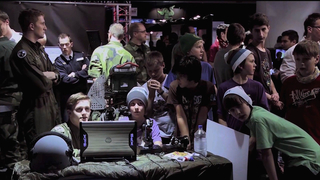 From Console to Trigger: How Pentagon “Exploits” Video Game Culture to Wire Youth for War