From Console to Trigger: How Pentagon “Exploits” Video Game Culture to Wire Youth for War

Among the issues tackled in the new documentary film “Drone” is the connection between video games and military recruitment. We air a clip from the film and speak to its director, Tonje Hessen Schei, as well as drone war whistleblower Brandon Bryant. “I think gamers should be offended that the military and the government are using [video games] to manipulate and recruit,” Bryant says. “We’re more interconnected now than at any time in human history — and that’s being exploited to help people kill one another.”

JUAN GONZÁLEZ: I want to turn to a clip from the film Drone about the connection between video games and military recruitment. This clip features Air Force Lieutenant Colonel Bryan Callahan and former U.S. Navy pilot Missy Cummings. But first, P.W. Singer, author of Wired for War.

LT. COL. BRYAN CALLAHAN: How do we find our 18X pilots? There’s been a lot of different theories. If you can answer that question or I can answer that question, you can make a lot of money for the Air Force right now, because we don’t know. We’re trying to get our arms around what really does make the best candidate for unmanned airplanes and how do we identify these people early.

MISSY CUMMINGS: Video gamers do have a skill set that is very important and actually enhances the skill set of drone operators. So, when I talk to people about this, I say, “We don’t need Top Gun pilots anymore. We need Revenge of the Nerds.”

JUAN GONZÁLEZ: We’re also joined by Tonje Hessen Schei, the director of the film, of Drone.

Tonje, welcome to Democracy Now! Could you talk about this whole issue of the recruitment of gamers by the military?

TONJE HESSEN SCHEI: Yeah, the gamers have been incredibly important for the U.S. military, and they have been targeting gamers in their recruiting strategies for the last decade. And this has been very successful, and it is now also spreading around the world. It is done in Germany and in Sweden and also in Norway. You know, gamers, their brains are pretty much wired to handle the challenges in modern warfare. And, you know, their eye-thumb coordination, their multitasking, their team fighting, the target shooting—they are basically perfect for the drone war.

And the relationship between the military and the entertainment industry, I think, is very, very important to take a close look at here. Our children are basically growing up playing real war scenarios from a very young age. And this game fight, you know, strange perception of war, has a big impact on them. To them, war is made to look fun, killing is made to look cool. And it really shapes them. And I think this “militainment” has a huge cost. And working with the drone operators, too, just seeing, you know, how the gaming attitude maybe is bleeding into how the drone program is operating, has been very disturbing to me.

JUAN GONZÁLEZ: And, of course, you guys know, in your own experience, that you’re involved in a war where you never actually meet or see the people you’re killing. You have no direct relationship—no real relationship to the war that you’re actually playing such a critical role in. I’m wondering what you—your thoughts on that?

BRANDON BRYANT: Well, I think that one of the big things that we should address is, like, there’s a lot of gamers that have been offended by stuff that we’ve talked about. And there’s a lot of gamers that are offended by, you know, talking about the correlation between violence and video games. And there’s a lot of studies that are out there that say that only certain video games cause certain aspects of this violence. And, you know, I’m an avid gamer—or I was, at least. I’m trying to get back into it. And I love this medium. It’s just the drone program destroyed my love of this medium, as well.

And I think gamers should be offended that the military and the government are using this type of thing to manipulate and recruit these guys. It’s a blatant misuse of power, abuse of power. It shouldn’t be something along the lines of, like, “Yeah, I want to play this game with my friends,” or even people that you don’t—you don’t see them face to face. You meet a lot of people instantaneously all over the world. We’re so interconnected. We’re more interconnected now than we’ve ever been in the entirety of human history. And that’s being exploited to help people kill one another.

AMY GOODMAN: And, Michael Haas, as we wrap up, what you want people to be left with today? And there’s a large military audience here, too. What you have to say to your fellow servicemen and women?

CIAN WESTMORELAND: We should all take responsibility for what we do at all times. I have a cellphone in my pocket. It has metals in there that were extracted from the Democratic Republic of Congo, where there’s been a war for 15 years and 4 million—I think 4.4 million people have died. I know that, and that bothers me.

AMY GOODMAN: You’ve all left the military. Were you—did they request you re-enlist?

AMY GOODMAN: Were you offered a bonus to re-enlist?

CIAN WESTMORELAND: We all were.

AMY GOODMAN: How much?

AMY GOODMAN: How much, Michael?

BRANDON BRYANT: $109,000, plus a step promotion and safety evaluation upgrader.

AMY GOODMAN: What did you say?

MICHAEL HAAS: I made my decision to get out long before that re-enlistment became even an option.

CIAN WESTMORELAND: I burned my uniform in my boss’s grill, and I hitchhiked around the world.

JUAN GONZÁLEZ: But for so many young people, that’s a lot of money, and they’re tempted. I guess—and they’re going to keep increasing the bonuses, obviously, as the situation in the war on terror continues.

AMY GOODMAN: Well, I want to thank you all for being with us, very important what you had to say today. Brandon Bryant, Cian Westmoreland, Stephen Lewis and Michael Haas, thank you so much. Tonje Hessen Schei, director of the film, Drone, as well, and Jesselyn Radack, with the Whistleblower & Source Protection Program, known as WHISPeR, at ExposeFacts.

And that does it for our show. An update right now on what’s happening in Mali as we speak, the ongoing hostage situation in Bamako, the capital: The U.S. military says U.S. special operations troops are working with Malian special operation forces to free the more than 140 hostages still inside the Radisson Blu Hotel right there in Bamako, which was seized by suspected Islamist gunmen this morning. 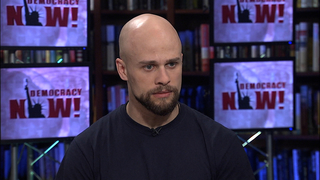