Democracy Now! catches up with Dallas Goldtooth of the comedy group the 1491s, and his father Tom Goldtooth, executive director of Indigenous Environmental Network, at The Place to B, a Paris hostel that serves as the center for independent journalists covering COP21. Tom Goldtooth recently won the Gandhi Peace Award. “If you look at the scenario we’re facing right now in Paris, you have a heightened police state, you have unreasonable bureaucracy, limited resources,” Dallas says.
“This is our element as frontline communities. This is the world we exist in.”

StoryNov 30, 2015“If You’re Not at the Table, You’re on the Menu”: Indigenous Activists Demand Role in Paris Climate Talks

AMY GOODMAN: Oh, and I see in one of these meeting rooms Tom Goldtooth, who is a longtime indigenous leader from the United States; his son, Dallas Goldtooth; and many others—familiar faces at these COPs, as it goes from one generation to another. Let’s go inside.

There was supposed to be a massive march on Sunday, but it was canceled because of the Paris attacks. Tom Goldtooth, your thoughts on this?

TOM GOLDTOOTH: Well, definitely, you know, as people of our big delegation here from Indigenous Environment Network, GGJ and CJA—Climate Justice Alliance, Grassroots for Global Justice—you know, we stand in solidarity with the people, starting from, you know, Beirut, from here, you know, a lot of people. We met a lot of people here. And some people got hurt here, too, so, you know, we come here with prayer.

But, you know, the reaction is just really not surprising to me, because I’ve been one of those fighters for social justice and environmental justice. But the reaction and how they’re treating local communities here, they’re really targeting certain communities that are—you know, they consider left, left side. And I think that’s wrong. And the other issue here is just the banning of the civil society. I mean, part of democracy is that the people who are disenfranchised, the people on the frontlines of these struggles of climate justice, energy justice, food sovereignty and all the related issues, you know, why are they being called out here? And why are—you know, why is that voice being shut down?

AMY GOODMAN: Dallas, you grew up in this movement. How does climate change affect you, your community?

DALLAS GOLDTOOTH: Well, the thing is that most folks think that we’re here just to talk about climate, and it’s not necessarily. It’s greater than that. We’re talking about climate justice. You know? And that’s all-encompassing. That’s—you know, if you look at the scenario we’re facing right now in Paris, I mean, you have a heightened police state, you have unreasonable bureaucracy, you have limited resources. I mean, this is our element as frontline communities. This is the world we exist in.

And so, we’re rising to the challenge to speak up and not only talk about what we’re fighting against, but also what we’re fighting for. And that’s just transition towards a renewable, sustainable society. In Minnesota and along, a lot of the indigenous communities is having a sincere conversation of how can we build sustainable sovereign nations, and also have a conversation about what does localized energy production look like, what does localized food production look like, what does it mean to really self-determine our future as native people.

AMY GOODMAN: That’s Dallas Goldtooth of the 1491s and his father, Tom Goldtooth, executive director of the Indigenous Environmental Network, based in Minnesota on Turtle Island, also known as North America. Tom Goldtooth recently won the Gandhi Peace Award. In a press statement issued by the Indigenous Environmental Network today, Tom Goldtooth said, quote, “We are here in Paris to tell the world that not only will the anticipated Paris Accord not address climate change, it will make it worse because it will promote false solutions and not keep fossil fuels from being extracted and burned.” He said, “The Paris COP21 is not about reaching a legally binding agreement on cutting greenhouse gases. In fact,” he said, “the Paris Accord may turn out to be a crime against humanity and Mother Earth.”

French Farmer-Activist José Bové on Paris Protest Ban: “We are in Prison in Our Own Home”

NEXTFrench Farmer-Activist José Bové on Paris Protest Ban: “We are in Prison in Our Own Home” 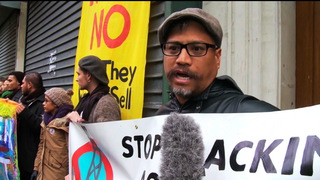 “If You’re Not at the Table, You’re on the Menu”: Indigenous Activists Demand Role in Paris Climate Talks