The nine leading Republican presidential candidates squared off last night in the first debate since Donald Trump shook up the race by proposing to ban Muslims from entering the United States. Much of the debate focused on national security, with several candidates pushing for increasing the size of the U.S. military, escalating the wars in the Middle East and expanding the power of the National Security Agency. “Tens of thousands of people having cellphones with ISIS flags on them? I don’t think so, Wolf. They’re not coming to this country,” Trump said. “And if I’m president and if Obama has brought some to this country, they are leaving. They’re going. They’re gone.” We speak to Arun Kundnani, author of “The Muslims Are Coming!: Islamophobia, Extremism, and the Domestic War on Terror.”

JUAN GONZÁLEZ: The nine leading Republican presidential candidates squared off last night in Las Vegas at the Venetian casino, owned by Republican billionaire backer Sheldon Adelson. Adelson and fellow billionaire Donald Trump held a private meeting before the event. It was the first debate since Trump shook up the race by proposing to ban Muslims from entering the United States.

AMY GOODMAN: Much of the debate focused on national security, with several candidates pushing for increasing the size of the U.S. military, escalating the wars in the Middle East and expanding the power of the National Security Agency. Prior to the prime-time event, four other Republicans took part in the so-called undercard debate. Senator Lindsey Graham said he wished President George W. Bush was back in the White House.

SEN. LINDSEY GRAHAM: George W. Bush made mistakes, but he did adjust. I blame Obama for ISIL, not Bush. I’m tired of beating on Bush. I miss George W. Bush. I wish he were president right now. We wouldn’t be in this mess.

AMY GOODMAN: During the prime-time debate, some of the tensest moments occurred in exchanges between another Bush—that’s George W. Bush’s brother, Jeb Bush—and Donald Trump. The debate opened when CNN’s Wolf Blitzer asked Trump about his proposal to ban Muslims.

WOLF BLITZER: As you mentioned in your opening statement, part of your strategy is to focus in on America’s borders. To keep the country safe, you say you want to temporarily ban non-American Muslims from coming to the United States, ban refugees fleeing ISIS from coming here, deport 11 million people and wall off America’s southern border. Is the best way to make America great again to isolate it from much of the rest of the world?

DONALD TRUMP: We are not talking about isolation. We’re talking about security. We’re not talking about religion. We’re talking about security. Our country is out of control. People are pouring across the southern border. I will build a wall. It will be a great wall. People will not come in unless they come in legally. Drugs will not pour through that wall. As far as other people, like in the migration, where they’re going, tens of thousands of people having cellphones with ISIS flags on them—I don’t think so, Wolf. They’re not coming to this country. And if I’m president and if Obama has brought some to this country, they are leaving. They’re going. They’re gone.

WOLF BLITZER: Governor Bush, you called Mr. Trump “unhinged” when he proposed banning non-American Muslims from the United States. Why is that unhinged?

JEB BUSH: Well, first of all, we need to destroy ISIS in the caliphate. That’s—that should be our objective. The refugee issue will be solved if we destroy ISIS there, which means we need to have a no-fly zone, safe zones there for refugees, and to build a military force. We need to embed our forces, our troops, inside the Iraqi military. We need to arm directly the Kurds. And all of that has to be done in concert with the Arab nations. And if we’re going to ban all Muslims, how are we going to get them to be part of a coalition to destroy ISIS? The Kurds are the greatest fighting force and our strongest allies. They’re Muslim. Look, this is not a serious proposal. In fact, it will push the Muslim world, the Arab world, away from us at a time when we need to re-engage with them to be able to create a strategy to destroy ISIS. So, Donald, you know, is great at the one-liners. But he’s a chaos candidate. And he’d be a chaos president. He would not be the commander-in-chief we need to keep our country safe.

DONALD TRUMP: Jeb doesn’t really believe I’m unhinged. He said that very simply because he has failed in this campaign. It’s been a total disaster. Nobody cares. And frankly, I’m the most solid person up here. I built a tremendous company. And all I want to do is make America great again. I don’t want our country to be taken away from us, and that’s what’s happening. The policies that we’ve suffered under other presidents have been a disaster for our country. We want to make America great again. And Jeb, in all fairness, he doesn’t believe that.

JEB BUSH: Look, he mentioned me. I can bring—I can talk to—this is the problem. Banning all Muslims will make it harder for us to do exactly what we need to do, which is to destroy ISIS. We need a strategy. We need to get the lawyers off the back of the war fighters. Right now, under President Obama, we’ve created this standard that is so high that it’s impossible to be successful in fighting ISIS. We need to engage with the Arab world to make this happen. It is not a serious proposal to say that—to the people that you’re asking to—for their support, that they can’t even come to the country to even engage in a dialogue with us? That’s not a serious proposal. We need a serious leader to deal with this. And I believe I’m that guy.

AMY GOODMAN: Joining us now is Arun Kundnani. He is author of The Muslims Are Coming!: Islamophobia, Extremism, and the Domestic War on Terror, adjunct professor at New York University. This was the first debate since Donald Trump had called for a ban on all Muslims coming into the United States. Can you talk about the back-and-forth we saw here and, overall, the response of the Republicans around this issue?

ARUN KUNDNANI: Yeah, well, you know, here’s my summary. Should we be committing war crimes in the Middle East by carpet-bombing civilians, or should we be having dictators bomb civilians in the Middle East on our behalf? Oh, wait. If we do that, and we ban Muslims from coming to the United States, then how are we going to have those dictators come over here and discuss which people we’re going to bomb? So let’s let in some Muslims, but then take away their rights. You know, this is the tone, this is the kind of feel of last night’s debate. It is unprecedented to have this level of hateful rhetoric directed against Muslims. We are back to the kind of full-blown war on terror from 10 years ago. The difference this time is, at least after 9/11 we were responding to what was an exceptional event. The tragedy about San Bernardino is it’s a perfectly normal event, it’s a mass shooting, and those shootings happen every day in America.

AMY GOODMAN: “Normal.” Can you explain what you mean?

JUAN GONZÁLEZ: And did you see in any of the nine candidates up there any more sane approach among them or distinguishing one from another?

ARUN KUNDNANI: I mean, yeah, as I say, the variations between them are the different ways in which we might abuse people’s rights and go to war. There’s no one who’s really taking a principled stand. And unfortunately, this is true not just of the Republicans, actually, but across the political establishment. I mean, we have not seen anyone, actually, in mainstream politics say the objection to Trump is straightforwardly because he is making racist statements, and we know the history of this country, and we know where that leads. No one has said that. What people have been saying is pragmatic arguments: We should not say this stuff out loud, because otherwise people in the Middle East might turn into terrorists and come and bomb us—which, of course, feeds his exact narrative that Muslims are these kind of scary people on the verge of becoming terrorists.

DR. BEN CARSON: As far as monitoring is concerned, what my point is, we need to make sure that any place—I don’t care whether it’s a mosque, a school, a supermarket, you know, a theater—it doesn’t matter. If there are a lot of people getting there, engaging in radicalizing activities, then we need to be suspicious of it. We have to get rid of all this PC stuff, and people are worried about somebody’s going to say that I’m Islamophobic or what have you. This is craziness, because we are at war. That’s why I ask Congress, go ahead and declare the war.

ARUN KUNDNANI: Yeah, what Carson, Cruz, Trump are all doing is making explicit in their rhetoric what is already implicit in policy terms, right? So we already have a situation where, you know, every mosque in New York City has been under surveillance simply for being a mosque. We already deported thousands of people from the United States simply because they’re Muslim. We already have over a million people on terrorism watchlists, right? So, these kind of statements are—actually, what they’re doing is that they’re putting out in the open stuff that I think the people who see themselves as more mainstream would rather just keep quiet. And, you know, I think that the objection from people like Hillary Clinton to what Trump and Cruz and Carson are saying is, you know, of course we have a Muslim problem, but let’s just do this a little bit more quietly rather than making it so obvious. That’s his real sin, is to speak out.

AMY GOODMAN: We’re going to break and then come back to our discussion. Arun Kundnani is the author of The Muslims Are Coming!: Islamophobia, Extremism, and the Domestic War on Terror. He’s an adjunct professor at NYU. And we’ll be joined by others in our roundtable discussion, as we bring you more clips from the Republican presidential debate, held at Sheldon Adelson’s casino last night in Las Vegas. Stay with us.

Democracy Is Being Dismantled Before Our Eyes: Bob Herbert on Sheldon Adelson-Backed GOP Debate

NEXTDemocracy Is Being Dismantled Before Our Eyes: Bob Herbert on Sheldon Adelson-Backed GOP Debate 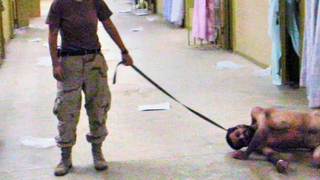