In these times of elections, climate chaos and COVID-19, independent news is more important than ever. You turn to Democracy Now! because you trust that when we're reporting on the pandemic or the uprisings against police brutality—or the climate crisis—our coverage is not brought to you by the fossil fuel, insurance or weapons industries or Big Pharma. We count on YOU to make our work possible. Today, a generous supporter will TRIPLE your new monthly donation to Democracy Now!, meaning your gift will go three times as far. This is a challenging time for us all, but if you're able to make a monthly donation and provide us with support we can rely on all year, please do so today. Stay safe, and thank you so much.
-Amy Goodman

In these times of elections, climate chaos and COVID-19, independent news is more important than ever. You turn to Democracy Now! because you trust that when we're reporting on the pandemic or the uprisings against police brutality—or the climate crisis—our coverage is not brought to you by the fossil fuel, insurance or weapons industries or Big Pharma. We count on YOU to make our work possible. Today, a generous supporter will TRIPLE your new monthly donation to Democracy Now!, meaning your gift will go three times as far. This is a challenging time for us all, but if you're able to make a monthly donation and provide us with support we can rely on all year, please do so today. Stay safe, and thank you so much.
-Amy Goodman

As Democracy Now! broadcasts from the U.N. climate summit in Paris, France, we examine the connection between a warming planet and increasing conflicts around the globe. “If we want to deal with the issues of conflict, go to the root cause: inequality and climate change,” says Asad Rehman, former national organizer of the Stop the War Coalition in the U.K., who now serves as head of international climate for Friends of the Earth. He notes that from 2006 to 2011, Syria suffered from five years of the worst drought ever in the country’s history. Nearly 2 million people moved from rural to urban areas, and 80 percent of livestock died. Asad compares this to the Arab Spring, which was driven in part by an agricultural collapse that prompted food prices to triple and generated mass social unrest.

AMY GOODMAN: This is Democracy Now!, democracynow.org, The War and Peace Report. I’m Amy Goodman. We’re broadcasting from Paris, France, from the U.N. climate summit, COP21—that’s conference of parties. We’re joined by our guest Asad Rehman, who is head of international climate for Friends of the Earth. As we talk now about climate and war, I want to talk about the connection between climate change and political instability. This is U.S. Secretary of State John Kerry speaking last month.

SECRETARY OF STATE JOHN KERRY: For example, in Nigeria, climate change didn’t lead to the rise of the terrorist group Boko Haram, but the severe drought that that country suffered and the government’s inability to cope with it helped create the political and economic volatility that the militants exploited to seize villages, butcher teachers and kidnap hundreds of innocent schoolgirls. It’s not a coincidence that immediately prior to the civil war in Syria, the country experienced its worst drought on record. As many as 1.5 million people migrated from Syria’s farms to its cities, intensifying the political unrest that was just beginning to roil and boil in the region.

ASAD REHMAN: I think it’s very difficult for anybody now not to make the connection between climate change, war, conflict. Climate change exasperates every existing tension. It exasperates every inequality. It drives conflict and war. We’ve seen that both in Syria, as John Kerry mentioned, but we also saw it in Darfur. We saw it in Nigeria. We’ve seen it in other places. The reality is, climate change is both creating the conditions for social upheaval in many places—as people face water stress, as they see their agricultural yields collapse, as people move from rural to urban areas, all existing tensions become exasperated. So, if we really want to deal with the issues of military and conflict, we should go to the root cause, and the root cause is inequality, as well as climate change.

AMY GOODMAN: I want to get to inequality, but the issue of climate in Syria, explain.

ASAD REHMAN: Well, Syria suffered, from 2006 to 2011, five years of the worst drought ever in Syrian history. Between one-and-a-half and 2 million people moved from rural to urban areas, exasperating existing social political tensions in those cities. Eighty percent of livestock died. So, of course, in those situations, just as we know in the Arab Spring, where the agriculture and the harvest collapsed, food prices increase tripled, those created the social tensions which led to the Arab Spring. A similar situation existed in Syria, and that’s the main connection between the two.

ASAD REHMAN: Well, we live in a broken economic system, don’t we, where we have 85 families who own 50 percent of global wealth; we have 80 percent of the world’s population, the majority of the world’s population, only own 5 percent of the world’s wealth. We have many of our citizens, our fellow citizens, two-and-a-half billion who don’t have access to a toilet, just under a billion who don’t—can’t even—don’t have access to electricity. The reality is, of course, we have enough finance, we have enough money; what we don’t have is the political will to spend it in the right direction and the right places.

So, inequalities, which already lead to people, both in terms of migration, leave people vulnerable, when climate change is added to that mix, it exasperates their situation. It plunges them from being able to be on subsistence to the kind of catastrophic situations that we’re seeing—in the Sahel, for example, 50 million people facing one of the worst droughts in human history.

AMY GOODMAN: So, Asad Rehman, as we wrap up, can you talk about what’s happening where we are right now, where we are at the COP21, the U.N. climate summit, the 21st climate summit? What is at issue? You have all these countries who have brought voluntary standards to the table. What’s being enforced? What is being hammered out over this two-week period? The heads of state came and left.

ASAD REHMAN: Well, you’d think, listening to the heads of state, while they brought a lot of warm words and half-hearted measures, but in reality, we have a problem with the global commons, and it needs a global solution, and that needs to be done on a fair basis. It needs to be done fairly, and it needs to be distributed fairly. And then there needs to be a legal component, so that we all know that each other is doing our fair share.

The reality is, is what we’ve got is a deregulated climate regime, largely at the behest of the United States, who want to put forward a proposal that people should just come here and say whatever they want to do, do whatever they want to do, made up in their own national determined circumstances. The reality is, that leads us to between 3 to 4 degree warming of the planet, and, of course, a burning of the planet and plunging millions of people.

But really what’s going here in these corridors is not that politicians and negotiators don’t know the impacts of climate change. They recognize that. What they don’t want to do is take responsibility for dealing with the impacts of climate change, for being responsible for the finance, for helping the poorest and the most vulnerable, or supporting them in terms of shifting away from dirty energy development to a much cleaner and more safer development pathway.

AMY GOODMAN: So, where inequality fits into this, what you expect to come out of this, who is responsible for dealing with climate change?

ASAD REHMAN: Well, the climate convention, the legal treaty, says that those who are most responsible are the richest countries who have grown wealthy from their addiction to dirty energy, from polluting the atmosphere and polluting our waters. They should take a lead. They’ve got the capacity, the resources to be able to shift away from dirty technology, invest in new technologies, but also support the poorest and the most vulnerable countries to be able to deal with the climate and climate change impacts.

Unfortunately, the real fight that’s going on behind the corridors is, is that rich countries don’t want to put finance on the table. What they would rather have is poorer countries taking out loans, getting into more debt to deal with the impacts of something that they are not responsible for.

AMY GOODMAN: The Paris accord, what do you want it to look like? December 11, this convention will be done.

ASAD REHMAN: Well, what we would like is a fair and ambitious, a legally binding agreement, which talks about taking action now and not tomorrow, provides finance for the poorest and most vulnerable countries, and shifts our technology and says very clearly we’re moving away from dirty energy. That means what needs to happen is rich, developed countries need to do much more than what they’re doing now, before 2020, and not say that they’ll promise to do very little in the coming decades.

AMY GOODMAN: Asad Rehman, I want to thank you for being with us. Of course, we’ll continue this discussion over the next 10 days. We’ll be here at the COP for the entire U.N. climate summit. Asad Rehman is head of international climate for Friends of the Earth, previously the head of the—national organizer of the Stop the War Coalition in the U.K. 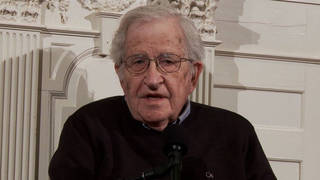