The Future We Want: Youth Activists Focus on Carbon Emissions with #ZeroBy2050 Campaign at COP21

Youth leaders from many of the countries most at risk to climate change are at COP21 demanding an ambitious goal in the Paris Agreement: 100 percent renewable energy by 2050. Democracy Now!’s Carla Wills and Juan Carlos Dávila spoke to participants of an action led by indigenous youth demanding that developed countries commence an immediate phase-out of fossil fuels and provide finance and technology to aid developing nations.

SAGAR ARYAL: My name is Sagar. I’m 20 years old, climate activist from Nepal. I grew up in Nepal in 1995. When I was 10 years old, I moved from my village to the city, and at that time I heard lots of people talking about a climate crisis. I heard them saying that our mountains are melting. I started to know more, and I founded an organization when I was 10 years old. It was a campaign. We collected books to read about the climate crisis. And soon, like, we decided that this is going to be the biggest problem of mankind. And we don’t have to save our planet; it’s about saving our generation. Mother Earth is calling us, saying, “It’s about your survival. I can stay here without you, but you people, you can’t stay here.”

So then we started doing different campaigns, basically on education and democracy to educate people climate crisis is real. And we started working. We started planting trees. We started training young people to serve as immediate health responders where there are floods, where there are glacial lake outbursts. And we wanted to bring these actions, the events happening as an impact of climate change, out globally so we could find a solution. The planet is for the generations to come. It’s for us young people. And if they are excluding us from the negotiations that they do for us, they do in the name of youth, then I don’t think it’s going to happen. I think youth should be included more in the climate conference, in the whole process of the UNFCCC.

ANTHONY TORRES: So, the eye is a zero, symbolizing zero carbon emissions by 2050. My name is Anthony Torres. I’m with SustainUS, and I’m from New York in the United States. And we’re here to call for zero by 2050, so that’s zero carbon emissions by the year 2050, and to support the Climate Vulnerable Forum, which in its declaration called for full decarbonization and 100 percent renewable energy for all by 2050.

The youth are going to be those who are writing history for those world leaders who were here just two days ago and the negotiators who are here for the next two weeks. We are the ones who are going to be bearing the greatest consequences of climate change throughout our lives, in addition to future generations, and we have a responsibility to stand alongside those who are facing those consequences here in the present and fight for an alternative and more just future.

ALEJANDRA SALAS: All right. My name is Alejandra Salas. I come from Costa Rica. I’m with the World Association of Girl Guides and Girl Scouts. We’re focusing on education, gender and human rights. And we’re here because why not, because our voices have to be heard, as well. Girls have a lot to say about climate change. They’re being affected in a disproportional way because they suffer double discrimination, because they’re young and they’re women. After a national disaster, they’re the ones that are more affected. They get less food. They are sometimes the ones that get rescued the last. When they’re in shelters, they might suffer violence, even rape sometimes. So, of course, they need to be heard. They need to speak their minds and tell what is happening and what they need and what they want. 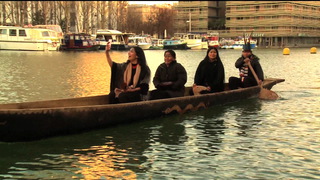