President Obama’s plan to shield as many as five million immigrants from deportation was supposed to begin taking its first applications this week. But late Monday night, U.S. District Judge Andrew Hanen of Brownsville, Texas, issued an injunction after a motion filed by Texas and 25 other states. Now the administration says it will comply with the ruling and delay accepting applications for work permits and deportation reprieves. We speak with Marielena Hincapié, executive director of the National Immigration Law Center, which filed a court brief opposing the challenge to Obama’s order.

AMY GOODMAN: President Obama’s plan to shield as many as five million immigrants from deportation was supposed to begin taking its first applications this week. But late Monday night, U.S. District Judge Andrew Hanen of Brownsville, Texas, issued an injunction after a motion filed by Texas and 25 other states. Now the administration says it will comply with the ruling and delay accepting applications for work permits and deportation reprieves. Speaking at the White House, President Obama said he’s confident the decision will be struck down on appeal.

PRESIDENT BARACK OBAMA: You know, keep in mind that this is something that we necessarily have to make choices about, because we’ve got 11 million people here who we’re not all going to deport. Many of them are our neighbors. Many of them are working in our communities. Many of their children are U.S. citizens and, as we saw with the executive action that I took for DREAMers, people who had come here as young children and are American by any other name except for their legal papers.

Well, for more, we’re joined by three guests. In Washington, D.C., Marielena Hincapié is executive director of the National Immigration Law Center, which filed a court brief opposing the challenge to Obama’s order. In Houston, Texas, José Espinoza is with us, an undocumented immigrant who had hoped to apply for relief on Wednesday. And in Houston, as well, Oscar Hernandez, who was granted relief in 2012, now a lead field organizer with United We Dream in Houston, Texas, where he’s been helping to get eligible immigrants like José ready to apply.

We welcome you all to Democracy Now! Let’s begin with Marielena Hincapié. Talk about the significance of this judge’s ruling and the court case on which it was based.

MARIELENA HINCAPIÉ: Thanks for the invitation, Amy. This is an extremely disappointing decision by a conservative judge in Brownsville, Texas. It’s not a surprise that Texas and 25 other states chose Brownsville to file this lawsuit. This is—while it is disappointing, it is also an outlier. This decision pretty much ignores decades of legal precedent and constitutional authority. It’s interesting the judge did not rule the president’s initiatives as unconstitutional. He decided to focus, in 123 pages, on a very procedural issue, which basically the judge found that the administration failed to follow the Administrative Procedure Act and didn’t go through a public comment period—that, despite the fact that legal scholars across the ideological spectrum agree with us that this wasn’t required, that the president has prosecutorial discretion, just as any other law enforcement agency does, to decide how to use its limited resources, who to deport and who not to deport. And recently, the Supreme Court in 2012, in the Arizona v. U.S. decision, said very clearly and actually gave examples, such as the administration has the authority not to deport parents of U.S. citizen children, workers and others for humanitarian reasons. The president simply expanded the DACA 2012 initiative that he announced then, which is not being challenged by Texas and these states, either.

AMY GOODMAN: I want to read from Judge Andrew Hanen’s opinion. He wrote, quote, “The court finds that the government’s failure to secure the border has exacerbated illegal immigration into this country. … Further, the record supports the finding that this lack of enforcement, combined with this country’s high rate of illegal immigration, significantly drains the states’ resources.” Marielena Hincapié, talk about what he is saying here.

MARIELENA HINCAPIÉ: Yeah, the interesting thing, Amy, is our communities, especially those that live and work at the border, know full well that in fact this administration has very aggressively enforced. There’s nothing about lax enforcement under the Obama administration. The border is more secure than ever before. And we’ve got record numbers of deportations in this country. What the administration finally did—and this is as a result of immigrants who have fought for and won this very significant victory. We’re talking about DREAMers, including some of the folks on today’s show, DREAMers’ mothers and fathers, workers, who have fought for this, including putting their lives on the line—civil disobedience, hunger strikes, etc. That is what has brought us to this place: the grassroots energy. And the judge basically decided to ignore even law enforcement leaders who came out in support and said we need this for public safety reasons.

AMY GOODMAN: I want to turn to comments by Texas Governor Greg Abbott, who led the lawsuit against Obama’s executive order on immigration, along with 25 other states. He spoke on Wednesday.

GOV. GREG ABBOTT: The district judge ruled that it was clear that the president’s executive action violated what’s called the Administrative Procedure Act. And because of that, it was unnecessary for the judge to dig deeper into the other legal claims that we made. It is abundantly clear that the Obama administration has violated the Administrative Procedure Act. And as a result, I think that on that issue alone, we will win all the way up to the appellate ranks.

AMY GOODMAN: After a judge ruled in his favor, Governor Abbott tweeted President Obama’s order, quote, “has been ruled unconstitutional.” Marielena Hincapié, is that correct?

MARIELENA HINCAPIÉ: Absolutely not. That is incorrect. And in fact, it’s a reminder that Governor Abbott’s comments are—this lawsuit is not about the legality or the constitutionality. This is a communications campaign by opponents of the executive action and, frankly, by opponents of immigrants. It’s not a surprise, Amy, that when you look at the states that have filed this lawsuit, these are states that have passed anti-immigrant legislation, anti-worker legislation, anti-choice legislation, and who really are basically afraid of the demographic shift happening in this country. That is what this lawsuit is about.

AMY GOODMAN: Now, it’s not as if we didn’t know what the judge’s personal views were. He previously called President Obama’s reprieve for undocumented immigrants, quote, “an open invitation to the most dangerous criminals in society.”

MARIELENA HINCAPIÉ: Yes, unfortunately, that is why we expected this decision. And we expected the decision, our communities are ready and prepared, and we see this as a temporary setback. This is not the end of this. And in fact, it’s really important for viewers and listeners to understand that this decision does not affect the current DACA program, either. Those who currently have DACA under the 2012 initiative or who are up for renewal or who haven’t applied yet are still protected. That this decision—and it doesn’t also affect any of the other initiatives announced by the president on November, including the new priorities with respect to deportation. 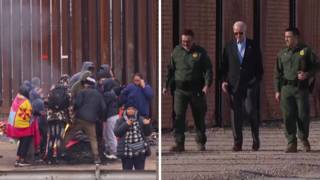