Wisconsin Gov. Scott Walker made headlines Thursday when he compared the Islamic State to pro-labor protesters in Wisconsin. A top Republican presidential contender, Walker made the comment at the Conservative Political Action Conference (CPAC) when asked about the Islamic State. “If I can take on 100,000 protesters, I can do the same across the globe,” Walker told the audience. Meanwhile, Walker has announced plans to sign an anti-union right-to-work bill that would eliminate the requirement that workers must pay union fees. On Wednesday, the Wisconsin State Senate passed the measure on a mostly party-line vote of 17 to 15. The Republican-controlled State Assembly is expected to pass the legislation next week. We speak to Madison-based journalist John Nichols of The Nation. He is author of “Uprising: How Wisconsin Renewed the Politics of Protest, from Madison to Wall Street.”

JUAN GONZÁLEZ: On Thursday, Wisconsin Governor Scott Walker, and possible presidential candidate, made headlines when he compared the Islamic State to unions in Wisconsin. He made the comment at CPAC, the Conservative Political Action Conference.

NED RYUN: Governor Walker, Ned Ryun, American Majority, board member of the American Conservative Union. Would like to know, should you become commander-in-chief, how would you deal with threats such as ISIS?

GOV. SCOTT WALKER: We will have someone who leads, and ultimately will send a message, not only that we will protect American soil, but do not—do not take this upon freedom-loving people anywhere else in the world. We need a leader with that kind of confidence. If I can take on 100,000 protesters, I can do the same across the world.

Joining us here in New York, the person who’s usually in Madison, John Nichols. He’s a political writer for The Nation, author of Uprising: How Wisconsin Renewed the Politics of Protest, from Madison to Wall Street. In our last two minutes, John, the significance of Governor Walker comparing ISIL to the unions of Wisconsin?

JOHN NICHOLS: I’m afraid it’s not the first time that he has suggested that striking down these protests back in 2011, and continuing to try to prevent protests in the capital, trying to force protesters out, has somehow prepared him to deal with the world. And the tragedy of this is so profound on so many levels. First off, he is overestimating his own skills. Second, he is underestimating the challenges and the complexity of the threats from around the world.

But most of all, he is deeply, deeply mischaracterizing those who rose up to challenge and question his policies. These were school teachers and snow plow drivers and nurses and parents of children with autism and other challenges, seniors who were concerned about their care. This was not just a union protest in Wisconsin; it was an anti-austerity protest. And it was incredibly diverse, incredibly—and I will use the word—beautiful. You were there, Amy.

And I think to try and suggest that disrespecting peaceful protest, that literally went out of its way to stop at stoplights, you know, to let people cross, it’s so wrong. And I think it raises profound questions. You know, you can get angry about all this, but I think it raises profound questions about whether Governor Walker really begins to understand what he’s talking about as regards global threats, but also begins to understand how a president should look at the people he would serve.

AMY GOODMAN: Final question, and we only have 10 seconds. Back to our first story, FCC, the major decision around net neutrality, you said you debated Tim Wu on whether the term “net neutrality” should be the one that was used a decade ago.

JOHN NICHOLS: Well, you started the show with Tim Wu, and Tim did not blow his horn hard enough. He and I have both been involved for a long time with the group Free Press. And Tim really was the person who argued for using the term “net neutrality” so we understood net, the net, Internet, and that it had to be neutral with all forces. He was a profound figure in this. And frankly, you couldn’t have picked a better guest to start the show with.

That does it for our broadcast. Democracy Now! has a job opening, a part-time camera operator to work on our live broadcast here in New York. Go to democracynow.org for more information. 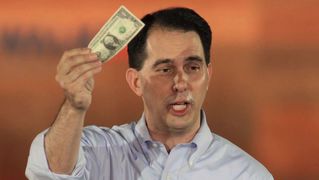