Wisconsin Governor Scott Walker has become the 15th Republican candidate to formally announce he’s running for president. On Monday, Walker launched his campaign by touting his successful efforts to eviscerate public employee unions in his home state and later defeat a recall effort against him. He also extolled his record reducing taxes, cutting the size of the federal government and passing voter restrictions. On the domestic front, Governor Scott Walker promised to repeal Obamacare, build the Keystone XL pipeline, subject welfare recipients to drug tests, and roll back federal regulations. On the international front, he vowed to reject the nuclear deal with Iran, re-establish an “unshakable bond” with Israel, focus more on Islamic terrorism and less on climate change, as well as engage more aggressively with Russia and China. We go to Wisconsin to speak with John Nichols of The Nation. “If there is someone who has attempted to impose an austerity agenda in an American state, in many senses, it is Scott Walker,” Nichols says.

AMY GOODMAN: Wisconsin Governor Scott Walker has become the 15th Republican candidate to formally announce he’s running for president. On Monday, Walker launched his campaign by touting his successful efforts to eviscerate public employee unions in his home state and later defeat a recall effort against him. He also extolled his record reducing taxes, cutting the size of the federal government, and passing voter restrictions.

GOV. SCOTT WALKER: We need new, fresh leadership, leadership with big, bold ideas from outside of Washington, the kind of leadership that knows how to get things done, like we’ve done here in Wisconsin. Since I’ve been governor, we took on the unions, and we won. We lowered taxes by $2 billion. In fact, we lowered taxes on individuals, on employers and property owners. Property taxes today are lower than they were four years ago. How many other governors can say that? Since I’ve been governor, we passed lawsuit reform and regulatory reform. We defunded Planned Parenthood and passed pro-life legislation. We enacted castle doctrine and concealed carry, so we can protect ourselves, our families and our property. And we now require a photo ID to vote in this state. If our reforms can work in a blue state like Wisconsin, they can work anywhere in America.

AMY GOODMAN: On the domestic front, Governor Scott Walker promised to repeal Obamacare, build the Keystone XL pipeline, subject welfare recipients to drug tests and roll back federal regulations. On the international front, he vowed to reject the nuclear deal with Iran, re-establish an unshakable bond with Israel, focus more on Islamic terrorism and less on climate change, as well as engage more aggressively with Russia and China. He is best known for gutting collective bargaining rights for public sector workers in 2011. On Sunday, he signed a state budget which slashes funding for the University of Wisconsin, expands the voucher program for private schools and eliminates the state’s living wage law.

On Monday, the AFL-CIO president, Richard Trumka, issued a one-sentence statement on Walker: quote, “Scott Walker is a national disgrace.”

Well, for more, we go directly to Madison, Wisconsin, where we’re joined by John Nichols, political writer for The Nation and the author of Uprising: How Wisconsin Renewed the Politics of Protest, from Madison to Wall Street. His most recent piece for TheNation.com, “Scott Walker Campaigns Against Unions, Wages, and Weekends.”

John Nichols, welcome back to Democracy Now! Talk about this newest entry into the Republican presidential race.

JOHN NICHOLS: Thanks for having me, Amy, and I especially appreciate coming after that very good segment on Greece and the fight on austerity. And in many ways, Scott Walker connects to many of these global debates, because if there is someone who has attempted to impose an austerity agenda in an American state, in many senses, it’s Scott Walker. When he came in as governor of Wisconsin, he claimed there was a huge financial crisis, so severe that he had to do an emergency budget repair. That budget repair attacked public sector unions. It attacked collective bargaining. But it also prepared the way for deep cuts to education, deep cuts to public services, and at the same time, this governor refused federal funding for mass transit, for high-speed rail, and even refused federal funding for broadband Internet, as well as messing with all the Medicare/Medicaid payments. And so here you have a governor who has really grabbed hold of some of the most extreme economic positions of Republicans.

And it hasn’t worked. Wisconsin has an economy that is anything but vibrant. It trails neighboring states, such as Minnesota, in job growth. It trails many of the top national measures as regards economic vitality. And perhaps most importantly, in Wisconsin at this point, there is deep, deep division. Polling shows that Governor Walker has a 55 percent disapproval rating. Only 41 percent of people approve of him at this point, according to the most recent major poll in Wisconsin. And notably, I think it’s 67 percent of people do not believe that he can effectively govern the state and run for president. So, for all he says about being able to do nationally what was done in a blue state, in a relatively Democratic state of Wisconsin, the fact is that if he takes his agenda national, that’s not a promise for the future. In many ways, it’s a threat.

AMY GOODMAN: Earlier this year, Governor Walker made headlines when he compared the Islamic State to unions in Wisconsin. He made the comment at CPAC, the Conservative Political Action Conference.

NED RYUN: Governor Walker, Ned Ryun, American Majority, board member of the American Conservative Union. Would like to know, should you become commander-in-chief, how would you deal with threats such as ISIS?

GOV. SCOTT WALKER: We will have someone who leads and ultimately will send a message not only that we will protect American soil, but do not—do not take this upon freedom-loving people anywhere else in the world. We need a leader with that kind of confidence. If I can take on 100,000 protesters, I can do the same across the world.

JOHN NICHOLS: Well, it was a remarkable statement by the governor, by any measure, because it told us two things. First off, this is a candidate for president of the United States—at that point unannounced, now announced—who has exceptionally limited background in foreign policy, really does see it in very simplistic terms. And even in his speech yesterday, he defaulted toward an almost Cheneyesque worldview, an almost Dick Cheney worldview, in which he was incredibly hardcore, talking about ripping up the Iran agreement without even seeing it, again and again going toward very militaristic, very aggressive stances globally. And then to suggest, at the same time, coming from this place of extremely limited knowledge on international affairs, that he got his experience by taking on teachers and nurses and snowplow drivers, firefighters, police officers, who came to that Capitol, peacefully, to say, “Look, we disagree with something that you’re doing. We think that your assault on unions is wrong. We think it will actually be not only damaging to individual union members and unions, but to the state of Wisconsin.”

And if I can just emphasize here, this anti-union stance is so central to who Scott Walker is and to his candidacy for president, yesterday it was the pivot point in his speech. He introduced himself a little, and then he had a line, roughly, “We took on the unions, and we won.” And the thing to remember is that it didn’t just end in 2011. Throughout Scott Walker’s tenure, he has attacked unions again and again and again. He promised that he was not interested in doing a right-to-work law; then, earlier this year, he turned around and signed a right-to-work law, very anti-labor legislation, and then said he had always been for it and that it would send a message to America and the world. Then, more recently, when he signed his current budget, this budget includes a gutting out of our state’s prevailing wage law, which is very important for construction workers. It includes a rewrite of state legislation that used to guarantee that a minimum wage would be a living wage. And it also eliminates a protection that said that workers would get at least one day a week off. And I just want to emphasize, this governor had a chance to line-item veto any of those items. People begged him to do so, even some of his fellow Republicans. A dozen Republicans voted against this budget, many of them because they were concerned about how over the top it is in this anti-union zone and really also in an austerity approach to education and to public services. Just, people need to have a full sense of Scott Walker. He is someone who begins, I think, almost every discussion and almost every sort of premise of his candidacy on wanting to take national a very passionate anti-union agenda.

JOHN NICHOLS: He has reached out to the Koch brothers. He has reached out to Sheldon Adelson. And frankly, these funders are really willing to give money to whoever they see as the most viable Republican. I think that’s a reality. But Scott Walker is trying very, very hard to prove himself to them and, in doing so, to make himself an alternative both to Donald Trump and to Jeb Bush, somebody who is sort of a little bit more suit-and-tie, a little bit more mainstream, but also, I would emphasize, even more than Bush and Trump, probably willing to carry their agenda as far as it could possibly go, and also to carry the agenda of the American Legislative Exchange Council. And that agenda, I would just emphasize, in his speech yesterday, when he ran through all of those things that he had done, again and again and again, those items he was running through, those were agenda items of the American Legislative Exchange Council, ALEC. And it’s notable that Scott Walker, as a legislator, was very linked to ALEC and continues to be very tied to it.

“Something Big Is Happening”: John Nichols on Bernie Sanders’ Surge and Rising Power of Movements 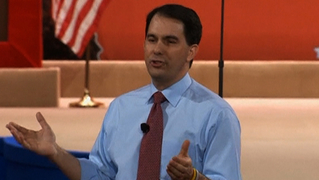