About half the population of the South Pacific Island state of Vanuatu has been left homeless by a devastating category 5 cyclone that flattened buildings and washed away roads and bridges. Aid agencies say Cyclone Pam killed at least eight people, with the death toll expected to rise as rescuers reach more far-flung areas. Vanuatu has a population of about 250,000 and is made up of more than 80 islands. Disaster relief officials and relief workers are still trying to establish contact with remote islands that bore the brunt of winds of more than 185 miles per hour. We are joined by Alex Mathieson, former Vanuatu country director for the aid group Oxfam.

AMY GOODMAN: About half the population of the South Pacific Island nation of Vanuatu has been left homeless by a devastating cyclone that struck on Friday, flattening buildings, washing away roads and bridges. Cyclone Pam was a Category 5 storm comparable in strength to Typhoon Haiyan, which hit the Philippines two years ago and killed more than 6,000 people. Now aid agencies say as many as eight people were killed during Cyclone Pam, and the death toll is expected to rise as rescuers reach more far-flung areas. Vanuatu has a population of about 250,000 people and is made up of more than 80 islands.

During the storm, Vanuatu’s President Baldwin Lonsdale was in Japan attending a U.N. conference on disaster reduction. Speaking Monday before he left to return home, he said the cyclone seasons his nation had experienced are directly linked to climate change, and described the extent of the damage.

PRESIDENT BALDWIN LONSDALE: Many of the buildings and houses has been completely destroyed. More than 90 percent of the buildings have been destroyed. People still haven’t come through yet. They still have wariness, have emotional feelings. But it will take time. It will take time before they can lift up. What is happening now is that, as I have said over and over again, that the people of the Republic of Vanuatu, they need to humanitarian assistance at the moment. And I’m very pleased with the international communities, that they have responded to my appeal, which is going through to Vanuatu right now.

AMY GOODMAN: Disaster relief officials and relief workers are still trying to establish contact with Vanuatu’s remote islands that bore the brunt of Cyclone Pam’s winds of more than 185 miles per hour. This is the president of Vanuatu’s Red Cross, Hannington Alatoa. When he describes the number of people estimated displaced, he means 130,000 people, not 130.

HANNINGTON ALATOA: It is unknown, to the extent of the people, the number of people affected in the outer parts of the country, outside Port Vila. Agencies are estimating approximately 130 [thousand] people—that is more than half the population of the country—may have been affected by Cyclone Pam. I think that there will be a lot more when the assessment is done and the investigation is completed, because, as I said earlier, the whole country was flattened.

AMY GOODMAN: Cyclone Pam also caused major damage on other Pacific islands, including Kiribati and the Solomon Islands. UNICEF says the number of children who have been displaced or affected by the cyclone may be as high as 60,000.

For more, we go directly to the former head of Oxfam in Vanuatu, Alex Mathieson, who is joining us from Australia.

Can you talk, Alex, about what has happened in Vanuatu? And for people who have never heard of this Pacific Island nation, talk about where it is.

ALEX MATHIESON: OK. So, Vanuatu is a country made up of over 80 islands, 65 of which are inhabited. It’s in the Pacific, South Pacific Ocean. It’s probably about three hours’ flying time directly east of the east coast of Australia. So it’s a very remote place. The capital, Port Vila, has a population of around 45,000 to 50,000 people, so—and then it has—the total population is about 260,000, then spread out over those outer islands. So, yeah, it’s a small country with—spread out over a large space.

And it has, yeah, major sort of logistical issues at the best of times, in terms of trying to get people and supplies out to those islands. So, obviously, with this massive cyclone, those logistical challenges are massive now in terms of trying to organize getting the relief and supplies to the people outside of Port Vila. In Port Vila—I mean, obviously, Port Vila has been badly affected. Communications are up to Port Vila, so we are able to see what is going on there. And we’re seeing sort of 80 to 90 percent of buildings damaged. And in the sort of poorer shantytown areas of Port Vila, we’re seeing massive destruction to homes. And we’re seeing significant damage to other infrastructure, such as roads being washed away by the high seas and bridges being destroyed by high rivers and as a result of flooding.

AMY GOODMAN: Is this the worst climate catastrophe to ever hit Vanuatu?

ALEX MATHIESON: Certainly, in living memory, there was a large cyclone in 1987 that did cause significant damage to Port Vila. But it’s my understanding that this damage and this event far exceeds that. Vanuatu is a very disaster-prone country. The U.N. has it at the top of the list in terms of the most—the country that’s prone to most natural disasters. So, in my time there—I was there for four years—I experienced many very large earthquakes, tsunami warnings and a couple of cyclones, but nothing at this scale.

AMY GOODMAN: And how has Vanuatu prepared for something like this? When you were Oxfam director in Vanuatu, you worked with them on disaster preparations.

ALEX MATHIESON: Sure. Yeah, so there’s been a big investment in the past four years, so—amassed by government and also by the nongovernment agencies, as well. So we formed a group called the Vanuatu Humanitarian Team, which is a coordination body for those nongovernment agencies, in order to improve the way that the country is able to plan for and respond to disasters. And there’s certainly been a radical change and improvement in the country during that time, then a lot of investment in that disaster management capacity at a national level. And also NGOs, such as Oxfam and others, have been working and supporting the disaster preparedness action at the community level, as well. And we are seeing the benefits of that now during this cyclone event, the speed in which the system kicked into action. Within, you know, a matter of hours of the cyclone, meetings were being held, plans were being made in terms of water and sanitation, food, logistics. So, you know, this is definitely—that investment in preparedness is definitely paying off now.

That said, this disaster is so massive, it’s going to stretch the capacity of any system, and the international assistance that now is coming in is very needed and very welcome by the Vanuatu government, it seems, and also the Vanuatu people. And that assistance needs to continue in order to support the Vanuatu people with its recovery.

AMY GOODMAN: On Sunday, Australia announced a support package for Vanuatu—where you are now, Alex, in Australia. This is the Australian Foreign Minister Julie Bishop.

FOREIGN MINISTER JULIE BISHOP: Today I can announce that Australia will be making an initial life-saving support package available to Vanuatu in response to a request from the government. This package will include $5 million that will be provided to Australian NGOs, particularly the Red Cross, and to other United Nations partners. We will also be deploying humanitarian supplies to provide support for up to 5,000 people, in the form of water, sanitation and shelter.

AMY GOODMAN: That’s Australian Foreign Minister Julie Bishop. What are the figures you have now for casualties, for people displaced, Alex, for the—what is it? Ninety percent of all of the buildings have been flattened?

ALEX MATHIESON: I think 90 percent have been damaged in Port Vila. Not all of those have been flattened. So the buildings that have concrete structures are still standing, but most of those have had their roofs ripped off. So, I think, still, in terms of, actually, what I’m seeing in terms of formal figures for casualties, it’s still sitting at eight, but that’s people in central Port Vila. I still think that the figures haven’t flown through from elsewhere. And obviously we’re not yet getting information from those outer islands, where we can just imagine that the situation is going to be grave. There has been some—now, some initial, first initial assessment to Tanna island, which is the major island in the South that was directly hit, and some aerial surveillance work there, and that is painting quite a grim picture in terms of the devastation to the housing and to the infrastructure, and anecdotal reports of people saying that they are lacking, you know, food and health facilities and those sorts of things. So, it seems that we are now beginning to get some access down to those areas and imagine that the figures, in terms of casualties and sort of displaced, will rise as we get a clearer picture there.

AMY GOODMAN: Alex Mathieson, we want to thank you for joining us, former Oxfam Vanuatu country director, now in Australia. When we come back, we’ll be joined by 350.org founder Bill McKibben. Stay with us. 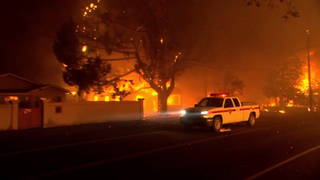