In Ecuador, thousands of people took to the streets in Quito and at least 12 other cities on Thursday to protest against the government of President Rafael Correa. In Quito, protesters held signs reading “We want democracy” and “Say no to re-election.” Demonstrators rallied in part to oppose constitutional changes that would allow indefinite re-election of the president and other officials. We speak to Ecuadorean Foreign Minister Ricardo Patiño about the protests, press freedom in Ecuador and the recent ruling by the International Court of Justice in the ongoing lawsuit against Chevron over oil pollution.

AMY GOODMAN: This is Democracy Now!, democracynow.org, The War and Peace Report. I’m Amy Goodman, with Juan González. Our guest is Ricardo Patiño, the foreign minister of Ecuador. Juan?

JUAN GONZÁLEZ: Well, we’d like to turn to some issues within your own country. We’d like to talk about the Chevron case. But first I wanted to ask you about the proposal of your government to make a constitutional amendment declaring the communications media a public service. There are some critics who are claiming that that’s an attempt on the part of President Correa of seeking to muzzle press liberties, freedom of the press. I’m wondering your reaction to the critics and why you felt you needed an amendment to the constitution, since you already have a law that pretty much says the same thing.

FOREIGN MINISTER RICARDO PATIÑO: [translated] Well, in the case of Ecuador, we have had the experience of major monopolization of the media for a long time. Six families own the media outlets in Ecuador. They own television, the print media, radio, and they have controlled communication. Unfortunately, as well, they have biased communication considerably. And they have brought together the interests of the media, the bankers and the large companies. We believe that citizens’ right to be adequately informed, that there be democracy in media ownership is fundamental. And that is why we believe that communication should be considered a public service. It’s not like selling ties or selling a cup or selling coffee. We’re talking about other kinds of services, and this service should be so considered.

Indeed, it’s unfortunate or regrettable, but after so much discussion of this in Ecuador and after it being proposed that communication should be so considered, the reaction has always been negative. Whereas in the United States, it’s considered it could be a public service—well, some who think that only in the United States is correct in terms of policies and rights—well, they’ve hushed up. But it’s unthinkable. We, citizens, have the right of freedom of expression—everyone, not just a few. But us citizens also have the right to receive accurate information that has been verified. And citizens, including politicians or members of the government, we also have the right to honor. All of these elements constitute the thinking in our government.

And some people try to criticize this. Why? Because what we do now—and this did not happen before—is that we respond to the distortions or the omissions that many large television networks commit in Ecuador. And that’s not fair. When they exercise their freedom of expression, we say they have the right—even if they lie. But we also have the right to refute those things that are said, and they don’t like that. And so, they say that in Ecuador we’re limiting freedom of expression. The best way to solve this is if anyone has any doubt, we’ll invite them to go to Ecuador for a day or two days, and then you’ll have no doubt about it, in terms of how there is full exercise of freedom of expression in our country.

AMY GOODMAN: Speaking of constitutional amendments, thousands of people protested in the streets of Quito yesterday and at least 12 other cities. They were protesting against the government. They were holding signs that said things like “We want democracy” and “Say no to re-election.” Demonstrators rallied in part to oppose constitutional changes that would allow indefinite re-election of the president and other officials. Your response?

FOREIGN MINISTER RICARDO PATIÑO: [translated] The decision to re-elect a citizen as president of the republic or as mayor or legislator is up to the people of Ecuador. The people of Ecuador can decide whether they think a president has done a good job. That he serve one term, two terms, that’s a decision of the Ecuadorean people, just as that’s a decision in many countries of the world. In Europe, sometimes the prime minister is there for 15 or 20 or 30 years, during the time the people are willing to elect them. In our country, we have a right to have that, as well. And, unfortunately, there are some people who say, because they fear the impetus, the great impetus that the citizen revolution has achieved, and the great sympathy that people have for our president, which is based on the performance of a truly popular government, but it is also based on the validity of the elections that have happened. President Correa has won three elections. He’s not been put in by the military or by the CIA. No, it’s been the people of Ecuador voting for him. So we know that citizens have the right to vote or to not vote for a given citizen. If they don’t like the work of President Correa, then they’re going to vote for someone else. So what is the fear of the Ecuadorean people having the right to re-elect someone, to re-elect the president or a mayor or a legislator as they please, as they see fit?

JUAN GONZÁLEZ: I wanted to ask about the Chevron case. Earlier this month, an arbitration panel in The Hague ruled in favor of your government against Chevron in one of the greatest calamities, environmental calamities, in modern times, wven though a U.S. court ruled against you. I wanted your reaction. And also, if you could talk to people here who don’t really know much about this disaster, what it has meant for your country?

FOREIGN MINISTER RICARDO PATIÑO: [translated] Briefly, Texaco was operating in Ecuador for about 30 years, from about 1960 to 1990, leaving an incredible ecological disaster. And it wasn’t an accident. One must distinguish, for in the case of British Petroleum, that was an accident, and in many other cases—a tanker that had an accident, and oil was spilled. No, here we’re talking about 30 years of oil operations. Now, having the adequate and sufficient techniques for processing the waste matter and impeding it from going directly into the rivers, regrettably, in the case of Ecuador, Texaco dumped the oil production waste directly into the rivers and the jungle. They devastated a huge area of the Ecuadorean Amazon. So, I want to draw that distinction. It’s not an accident. It is, regrettably, a decision that was made so as to get Texaco to have higher earnings, destroying our Amazon. Now, if the waste had been processed, it would have cost a sum, and they wouldn’t have earned more, but they would have protected the Amazon. Now, that is what’s at the origin of all this.

Now, a few days ago—I think it was March 11—the Permanent Court of Arbitration at The Hague took an important decision, which is in keeping with the positions put forth by the government of Ecuador, which is to say that the citizens who brought a claim—well, I want to make a clarification: The government of Ecuador has not brought a claim against ChevronTexaco; it’s been the citizens who have been impacted, those who saw their cows and even their loved ones die, those whose water sources have been destroyed. Those persons are the plaintiffs in the case against ChevronTexaco. Now, the tribunal has decided that that claim is a valid one, because Chevron’s argument is that the communities of the Amazon didn’t have a right to bring such a lawsuit, because at some point officials of the Ecuadorean government gave a release to ChevronTexaco from their responsibility as polluter. But that’s something that was done by Ecuadorean officials irresponsibly in 1998, but the citizens didn’t have to be impeded from bringing such a lawsuit, and it’s a very good step. It’s very good news that now the tribunal at The Hague has decided that those citizens did have a right to bring such a lawsuit. There is not yet a final ruling, because Chevron has some other observations and claims against the Ecuadorean state, but this first step is important because had they decided that the citizens didn’t have a right to bring the lawsuit, then what we might expect afterwards would be an annulment of Ecuador’s case. And this is an important first step.

FOREIGN MINISTER RICARDO PATIÑO: [translated] On April 20th, deliberations begin by the tribunal with the participation of Ecuador’s attorneys and Chevron’s attorneys to continue addressing the matter, because there are some other claims that Chevron has against Ecuador to prevent or to—or so that they not have to pay on a judgment that’s already been ratified by all the courts in Ecuador. ChevronTexaco has been ordered to pay $9.5 billion for the destruction caused by Texaco in our country. And now they are bringing a counterclaim against Ecuador, trying not to pay for the waste, the destruction. And now what they’re saying is that if they are somehow forced to pay the judgment, that they should be indemnified by the state. In other words, Ecuadorean taxpayers should pay Texaco, Chevron, for the destruction caused. Well, this is inadmissible. It’s like the birds firing at the shotguns. And we believe that the soundness of our arguments will enable the tribunal to recognize that the judgment handed down in Ecuador is legitimate and that the company, ChevronTexaco, has an obligation to comply, to compensate not the Ecuadorean state—the Ecuadorean state hasn’t brought a claim against Chevron—but rather the citizens, the citizens of the Amazon, the residents of the Amazon, for the destruction that they suffered. So, we are awaiting a fair decision from the tribunal, and we have had to undertake a major communication effort from the Ecuadorean state, because the multimillion and ill-intentioned campaign brought by Chevron against our state has been on a huge scale. And we have had to work very hard to try to offset the campaign by Chevron against us.

AMY GOODMAN: Ricardo Patiño, we want to thank you very much for being with us. Ricardo Patiño is the foreign minister of Ecuador. This is Democracy Now!, democracynow.org, The War and Peace Report. When we come back, we look at another oil company, another oil giant, ExxonMobil, and the deal that New Jersey Governor Chris Christie has made with them, and why so many people are protesting. Stay with us.

A Gift to ExxonMobil? Chris Christie Criticized over Settlement to Clean Up Century of Contamination

NEXTA Gift to ExxonMobil? Chris Christie Criticized over Settlement to Clean Up Century of Contamination 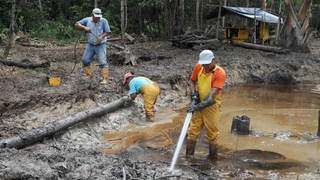