Following its election in January on a pledge to confront the austerity program that’s decimated Greece’s economy, the Syriza government has faced a major pushback from international creditors led by Germany. Days after Greece secured a four-month extension to a loan package in exchange for new conditions on its spending, Noam Chomsky says the European response to Syriza has been “extremely savage,” a reaction that could face Spain’s Podemos party should it win upcoming elections.

AMY GOODMAN: I wanted to ask you about Syriza in Greece, a movement that started as a grassroots movement. Now they have taken power, Prime Minister Alexis Tsipras. And then you have Spain right now. We recently spoke to Pablo Iglesias, the secretary general of the group called Podemos, that was founded, what—an anti-austerity party that has rapidly gained popularity. A month after establishing itself last year, they won five seats in the European Parliament, and some polls show they could take the next election, which would mean that Pablo Iglesias, the 36-year-old political science professor and longtime activist, could possibly become the prime minister of Europe’s fifth-largest economy. He came here to New York for just about 72 hours, and I asked him to talk about what austerity measures have meant in Spain.

AMY GOODMAN: That was Pablo Iglesias, the head of this new anti-austerity group in Spain called Podemos, which means in English “We can.” The significance of these movements?

NOAM CHOMSKY: It’s very significant. But notice the reaction. The reaction to Syriza was extremely savage. They made a little bit of progress in their negotiations, but not much. The Germans came down very hard on them.

AMY GOODMAN: You mean in dealing with the debt.

NOAM CHOMSKY: In the dealing with them, and sort of forced them to back off from almost all their proposals. What’s going on with the austerity is really class war. As an economic program, austerity, under recession, makes no sense. It just makes the situation worse. So the Greek debt, relative to GDP, has actually gone up during the period of—which is—well, the policies that are supposed to overcome the debt. In the case of Spain, the debt was not a public debt, it was private debt. It was the actions of the banks. And that means also the German banks. Remember, when a bank makes a dangerous, a risky borrowing, somebody is making a risky lending. And the policies that are designed by the troika, you know, are basically paying off the banks, the perpetrators, much like here. The population is suffering. But one of the things that’s happening is that the—you know, the social democratic policies, so-called welfare state, is being eroded. That’s class war. It’s not an economic policy that makes any sense as to end a serious recession. And there is a reaction to it—Greece, Spain and some in Ireland, growing elsewhere, France. But it’s a very dangerous situation, could lead to a right-wing response, very right-wing. The alternative to Syriza might be Golden Dawn, neo-Nazi party.

Noam Chomsky on Black Lives Matter: Why Won’t U.S. Own Up to History of Slavery & Racism?

NEXTNoam Chomsky on Black Lives Matter: Why Won’t U.S. Own Up to History of Slavery & Racism? 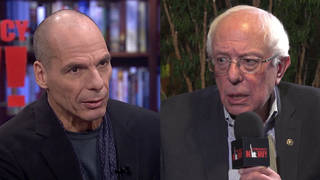