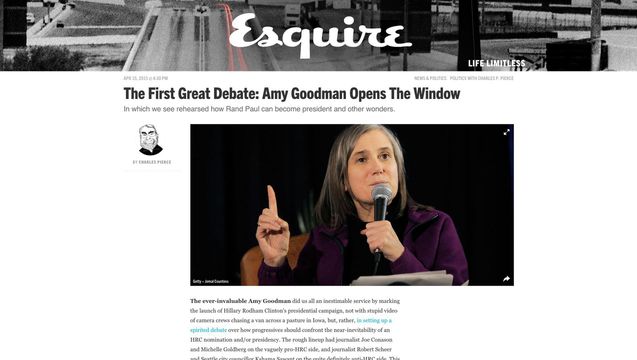 In a piece headlined, “The First Great Debate: Amy Goodman Opens The Window,” Esquire magazine has highlighted our recent debate on Hillary Clinton’s candidacy. Charles Pierce writes: “The ever-invaluable Amy Goodman did us all an inestimable service by marking the launch of Hillary Rodham Clinton’s presidential campaign, not with stupid video of camera crews chasing a van across a pasture in Iowa, but, rather, in setting up a spirited debate over how progressives should confront the near-inevitability of an HRC nomination and/or presidency. … It was positively gravid with substance. Let’s just say you won’t see this on Morning Joe any time soon.”