As Yanar Mohammed, co-founder and the director of the Organization of Women’s Freedom in Iraq, attends the Women Stop War conference in The Hague, she describes the current situation in Iraq. “The country is under a prevailing culture of militias, which have the upper hand. … They say, ’It’s either us or ISIS.’” Mohammed says civil society is sandwiched between Shia and Sunni extremists, and argues a secular approach is the only way to resolve the conflict in her country.

AMY GOODMAN: I also spoke on Sunday with Yanar Mohammed, co-founder and director of the Organization of Women’s Freedom in Iraq. She came to the Netherlands from her home in Baghdad. I spoke to her on a bus after she had addressed Nobel Women’s Initiative on her way to the WILPF event. I began by asking her to describe the current situation in Iraq.

YANAR MOHAMMED: The country is under something that’s nothing less than a civil war, where the Iraqi government, led by the Islamist Shia parties, is attacking the ISIS-conquered cities, and the massacres are underway, both sides. And we, in the Organization of Women’s Freedom, are trying to get to the women who are escaping the enslavement of ISIS, and opening shelters for them. But in general, the country is under a prevailing culture of militias, which have the upper hand. And nobody can be complaining about it, because whenever we say anything, they say, “But we are the ones who are liberating you from ISIS. It’s either us or ISIS.”

So, the Shia Islamist government is bombarding us with the Shia culture, militia culture first, and then we are afraid that they bring us the laws that we had just stopped last year, the Jaafari law, where they bring legal status to the marriage of nine-year-old girls, daughters. This is a law that we had just stopped in 2014. And now, with the victory of the Shia militias, they might take the opportunity and bring it back on us in Iraq. So, the civil society is doing its best to work against the trafficking of the Yazidi women, to speak out against the oppression of ISIS to people, but we are being sandwiched between a culture of Shia Islamism from the government and Sunni barbaric Islamism from the ISIS. If you are a young person in Iraq, if you are a woman in Iraq, you are totally alienated, because there are massacres left and right, and there is enslavement in the 21st century. And everybody tells you that this is a democratic times that we are living in.

AMY GOODMAN: What do you see as the answer?

YANAR MOHAMMED: I see only a secular answer could be a real solution. It cannot be done in a short time. It will take its time, but it’s the only savior for all the people of Iraq—the religious, the Muslims, the Sunni, the Shia, the Christians, the Yazidis. Only a secular government and constitution can be the—can save everybody.

AMY GOODMAN: Your evaluation of what happened after the U.S. invaded Iraq in 2003? And what responsibility today do you think the United States has, and what the U.S. should do at this point?

YANAR MOHAMMED: When the U.S. invaded Iraq, we were under the oppression of one single dictator. And there wasn’t much discrimination between the people of Iraq. Whoever was in opposition would be discriminated against. We did have problems of how to deal with dictatorship, but nowadays we are at the necks of each other. We found out that we are Sunnis, we are Shia, and we are given so many reasons to be killing each other. We have 10 million youth who are carrying machine guns and going to the rest of the country, killing the rest of the youth in that part of the country. We are in a very big trap where killing each other doesn’t seem to be ending soon. Once you are in the trap of hatred upon ethnic and upon sectarian lines, it takes many years to wash away, to cleanse this hatred. I feel that at this point, even when we destroy—when the Iraqi government destroys ISIS, we have a very big problem on our hand. There are major massacres that have been committed both ways, and these will not end, because the relatives, the children of the people killed, will still continue these massacres.

Women have been—women’s rights have been totally lost. By laws, they have been lost. By their status in the society, they have been lost. Our voices of the women are being silenced continuously. Our radio, community radio for women, was shut down by the government on June 12. They gave us different stories, and we still don’t know what’s the final story for silencing us, but we know that this is no democracy. Women cannot breathe. Youth are killing each other based on the sectarian ID. This is something we were not expecting. This is not democracy.

AMY GOODMAN: Yanar Mohammed, co-founder and director of the Organization of Women’s Freedom in Iraq. And that does it for our show here at The Hague. 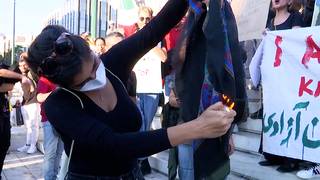