As independent Senator Bernie Sanders of Vermont announces his bid for the Democratic presidential nomination, we speak to former presidential candidate Ralph Nader. “We don’t want a coronation of Hillary Clinton,” Nader says of Sanders’ run. We also talk about his new book, “Return to Sender: Unanswered Letters to the President, 2001-2015.” The book is dedicated in part to the workers of the U.S. Postal Service.

SEN. BERNIE SANDERS: We now have a political situation where billionaires are literally able to buy elections and candidates. Let’s not kid ourselves. That is the reality right now. So you’ve got the Koch brothers and other billionaire families now prepared to spend hundreds and hundreds of millions of dollars in elections to buy the candidates of their choice, often extreme right-wing candidates. I’m the former chairman of the Senate Veterans Committee, and I can tell you I don’t believe that the men and women who defended American democracy fought to create a situation where billionaires own the political process.

AMY GOODMAN: Senator Sanders’ announcement came one day before May Day, celebrated around the world as International Workers’ holiday. Many events are planned across the country today, many mass protests that will also show solidarity with the Black Lives Matter movement, the immigrants’ rights movement, as well.

Well, today we’re joined by a former presidential candidate, Ralph Nader. His new book is called Return to Sender: Unanswered Letters to the President, 2001-2015, the book dedicated in part to the workers of the U.S. Postal Service.

Ralph Nader, welcome back to Democracy Now! First, let’s get your response to the announced candidacy of Bernie Sanders. It might bring back memories for you, the number of times that you ran for president.

RALPH NADER: Well, that’s a good—good news. We don’t want a coronation of Hillary Clinton. We want a vibrant debate in the televised primaries next year, and Bernie Sanders will provide an alternative view of where the country should be going. I hope he’ll be stronger on pulling back on empire. I’ve always thought his foreign policy and military policy were not up to his great domestic reforms and corporate accountability from Wall Street to Houston.

AMY GOODMAN: The issue of TPP, the Trans-Pacific Partnership, that doesn’t get a heck of a lot of attention in the mainstream media—when it does, presenting largely one point of view—is a mainstay, one of the things that Senator Sanders has been speaking against. It’s also an issue that you have been taking on, dealing with 40 percent of the global economy.

RALPH NADER: Well, the people have got to demand that their members of Congress block the fast track that is now beginning to circulate in Congress, which will allow an up-or-down vote, no amendments whatsoever to the subsequent Trans-Pacific Partnership, so-called. This is a corporate coup d’état. This is worse than NAFTA. It’s worse than the World Trade Organization. It’s bad for consumers, for labor, for the environment. All these necessities are subordinated to the supremacy of international commercial trade, and a tremendous invasion on local, state and national sovereignty. And all the disputes that may affect American workers and dealing with poverty and investment in poor areas in this country, all the disputes are going to be before secret tribunals. They cannot go to our courts. This is blatantly unconstitutional. But any citizen that tries to take these trade agreements to the federal courts are dismissed because of no standing to sue. So, we’ve got a real fight coming up. Go to GlobalTradeWatch.org, and you’ll get the details. I’m telling you, people, if this one passes, with about a dozen other countries on the Pacific Rim, it’s going to affect the pace of exporting jobs and industry, and subordinating the ability of the United States to be first, and environmental, labor and consumer standards.

RALPH NADER: Because, Juan, I think that the most democratic media in this country, with apologies to Democracy Now!, are the letters that individuals send to their elected officials. They cannot be censored, when they’re on their way. They cannot be distorted. And they’re not being respected. And I put these letters together in this book, Return to Sender, letters to George W. Bush and Barack Obama, just as an example of the kind of letters that go into the White House that show what the president should be doing, should not be doing, what’s going on around the country or inside the federal government that the president may not know about, unique proposals to turn the country around. And they’re ignored. They’re completely ignored. I mean, I wrote two critical letters to the prime minister of Canada, and they were properly acknowledged, answered and referred to the appropriate ministries. But it’s just a dark hole in the White House. I wrote a letter to Bush and Obama saying, “What is your correspondence policy? What’s your policy in answering letters, other than using some as political props or sending out robo-signed letters?” And there was no answer.

AMY GOODMAN: Can you read a portion of the letter that you called “A Family Appeal to Stop War.” Who did you write it to, Ralph?

RALPH NADER: Well, I wrote it to the mother and father of George W. Bush on the eve of the invasion of Iraq, the criminal invasion that’s killed over a million Iraqis, and millions of refugees, and blown apart that country that never threatened us—one of the greatest crimes that presidents have ever committed. It was never constitutionally approved. It was an outlaw presidency. And we could see it coming, because in the prior weeks, Amy, 12 major groups in our country, representing business, intelligence officials retired, municipal officials, religious groups, environment, women’s groups, student groups—they all wrote individual letters. And these groups represent millions of people around the country. They wrote individual letters begging to meet briefly with their president, George W. Bush, before the invasion of Iraq. Some of them had just come back from Iraq. And these letters were never even acknowledged.

And the press bears a serious responsibility here. The White House press corps is basically a ditto scribe operation. They don’t take any interest in letters that are coming in, other than if it’s a quirky type thing. And when these letters were released to the press, as many of them were, or they were sent to the White House press corps, or they were sent to various agencies like the Centers for Disease Control, the press ignored them. Now, years ago, letters got more respect. A letter would go to Senator Warren Magnuson urging a hearing on an important subject. It would get into The Washington Post or The New York Times. But the state of correspondence today, the most initiatory democratic media in the country, is at its lowest level that I can ever see.

JUAN GONZÁLEZ: Well, Ralph, I wanted to ask you about one quirky letter that’s at the same time very profound, that you sent on June 3rd, 2011, to President Obama. It was called “Letter from E.coli 0104:H4.” And you say, “Dear President Obama: My name is E.coli [0104:H4]. I am being detained [here] in a German Laboratory in Bavaria, charged with being 'a highly virulent strain of bacteria.'” And you go on to say, “Your associates are obsessed with possible bacteriological warfare by your human enemies. Yet you are hardly doing anything on the ongoing silent [violence] of my indiscriminate brethren.” Could you elaborate?

RALPH NADER: Yes, it was a way to try to get a little attention. This little E. coli, in this fictional approach, was trying to redeem itself before it was going to be put away in this Petri dish in Europe, and it was a plea, as I’ve made a plea to President Clinton and President Bush, that they’ve got to pay more attention to the threat of viral and bacteriological epidemics around the world and in the United States. We’ve just come off the Ebola epidemic in Africa, as everybody knows. But the mutation of these viruses and bacteria is also a threat. You can see resistant tuberculosis to existing drugs, antibiotic resistance that’s killing tens of thousands of people in this country, hospital-induced infections.

This is a very serious epidemic of preventable violence, but where is the trillions of dollars going? To expand empire, to blow apart other countries, to create more enemies, to kill more civilians overseas. It’s a clinically insane institutional situation we have in our federal government, and what Eisenhower warned about in his final speech, the military-industrial complex, that goes from Washington to Wall Street to Houston. This has got to be what Bernie Sanders and other new entries into the presidential race talk about. You’re not going to hear this from the Republicans, over a dozen of them running for the presidency, ignoring all these problems.

AMY GOODMAN: Ralph, we’re going to do part two of this discussion in the post-show. We’re going to post it online at democracynow.org. But your final comment, in this last 10 seconds, about writing letters to presidents?

RALPH NADER: It’s very important for people to write these letters, send copies to members of Congress or to the press or anyone who you think is interested in the contents of the letter. It’s a way to get people involved. And don’t worry if you don’t get an answer. Send it around to other people, and you’ll get people coming to join you in whatever effort you pursue.

AMY GOODMAN: Part two in a moment. Ralph Nader, we thank you so much, longtime consumer advocate, corporate critic, former presidential candidate. His new book is Return to Sender: Unanswered Letters to the President, 2001-2015. He’ll be speaking here in New York June 1st at Book Culture. And Juan and I will be in Washington, D.C., at the New York Avenue Presbyterian Church for the 50th anniversary of the Vietnam War today and tomorrow. 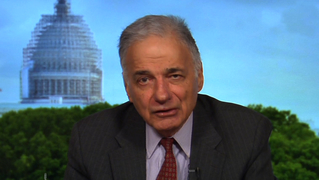