WikiLeaks has just revealed secret details of a European Union plan to use military force to curb the influx of migrants from Libya. “The documents lay out a military operation against cross-Mediterranean refugee transport networks and infrastructure,” WikiLeaks says. “It details plans to conduct military operations to destroy boats used for transporting migrants and refugees in Libyan territory, thereby preventing them from reaching Europe.” WikiLeaks founder Julian Assange discusses the EU’s plan from his place of refuge inside Ecuador’s London embassy.

AMY GOODMAN: We return to our exclusive interview with WikiLeaks founder Julian Assange. I went to London and spoke to him inside the Ecuadorean Embassy there on Memorial Day.

AMY GOODMAN: Can you talk about the documents you have released around Libya and the immigrants that are trying to escape?

JULIAN ASSANGE: A secret plan was constructed by the defense ministers of Europe, the defense ministers from the various countries. The plan was led by the U.K. and Italy. And that plan, authored on the 13th of May, is what we have released. Now, it calls for a military intervention in Libya to destroy refugee boats before they leave port, from Libya coming to Europe, and also for other attacks on the people who provide the services of conducting the boats, called, of course, in that plan, “people smugglers,” and they’re necessary to stop their network.

AMY GOODMAN: You said destroy the boats. What do you mean?

JULIAN ASSANGE: That’s right. Before the refugees get into the boats, destroy the boats. And so, of course, this involves potential infringements of Libyan sovereignty, destroying boats in port.

AMY GOODMAN: What do you mean, “destroying”? Blowing them up?

JULIAN ASSANGE: Blowing them up, sabotaging them. Destroying them through military means is what is specified in the document.

AMY GOODMAN: How would they know if there are people in them?

JULIAN ASSANGE: Well, they may not. They may conduct surveillance operations to detect people. They may be unconcerned with people. The way that they’re talking about the people smugglers in the document is such that you have the impression that the people smugglers themselves would be a military target. The infrastructure, and specifically boats, but their broad infrastructure, also appears to be a military target. So, for example, the systems that repair boats or who are involved in collecting together the refugees, these seem like they would also be military targets.

AMY GOODMAN: And whose documents are these?

JULIAN ASSANGE: This is a classified document from the European Union, from the EU Military Committee. And the EU Military Committee is the defense ministers of the European Union. The document was led by the United Kingdom and Italy. And it will be Italy who is leading the on-the-ground—it will be Italy who is militarily coordinating the on-the-ground efforts.

AMY GOODMAN: And in the documents, the concerns about what this will look like, the so-called optics of the situation?

JULIAN ASSANGE: Yes, there’s a layout for a media information operations at the same time, very significant concern about the optics, about where there’s media scrutiny of the EU for killing people, or false reports of killing people. They say, you know, where the EU has actually killed people in this operation, so they are intending to at least risk killing people in blowing up these boats.

I guess from a—if we now pull back a bit, where is this coming from? Well, it’s no surprise that the U.K. was involved in the draft. Since the 7th, with the new Conservative government here having a majority, we have seen a very strong push along a Conservative agenda against migrants, against pulling out of some parts of the EU, against a retardation of the European Court of Human Rights. From the Italian perspective, they have to deal with the migrants that come across.

Now, this will be the first time that the EU, as a military force—not NATO, but the EU—is engaged in hostilities. So it’s quite—it’s quite significant from the perspective of what the EU is going to look like as a military force. And if you think of Libya, there’s the question of what do these EU nations want with Libya. Well, remember, Libya was largely Hillary’s war. That’s came out, that in fact the Pentagon was pushing against it, Hillary was pushing for it. From the American side, there wasn’t unity in pursuing the prosecution of Libya, because the Pentagon was worried about the post-Gaddafi environment, had that been set up enough, for exactly the same reasons—the exact same lessons we learned in Iraq. Now, there was considerable European push for war in Libya, as well, from Italy, from France and from the United Kingdom, to get at Libyan oil. Deals were done in terms of splits with the Libyan rebels, the splits that Italy would have, the splits that France would have. So, we may also be looking at an excuse to get on to the shoreline of Libya. They will have established a breach of Libyan sovereignty. They will be engaging in destruction of these boats and the people-smuggling operations on Libyan soil.

AMY GOODMAN: And the documents address the Western-backed groups within Libya and what they feel about this?

JULIAN ASSANGE: It has come out publicly, when some versions of this plan have been spoken about in the media. The plan hasn’t come out, but versions of it have been spoken about, and that the groups that the West says is the government of Libya, if you like, they’re those factions around Benghazi. The Libyan foreign minister says that this should not be tolerated, of course. Libyans could not accept the prevention of Libyans seeking refuge being pursued by jihadists. It’s really a very new situation. It’s new in terms of the EU acting as a force in this manner, acting as a force against refugees, against refugee boats, acting as a force, in effect, to assist ISIS. These are people that are being driven out of Libya by jihadists of various factions, including ISIS. So, I find it quite, you know, quite a dangerous precedent. Now, having once established themselves on the northern shore of Libya, there’s a question about then what happens. Presumably, EU troops or EU agents or EU warships on the shore of Libya are going to receive some kind of resistance occasionally, and they will meet that resistance. And that could then well snowball into an invasion of Libya. And that may—I must speculate that that may be part of the vision. 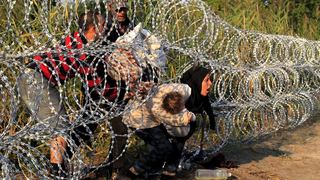