WikiLeaks has begun hosting a new database called ICWatch, built by Transparency Toolkit. The site includes a searchable database of 27,000 LinkedIn profiles of people in the intelligence community. Organizers say the aim of the site is to “watch the watchers.” WikiLeaks founder Julian Assange talks about how the database could be used to help identify individuals connected to the U.S. kill list, formally known as the Joint Prioritized Effects List, or JPEL.

AMY GOODMAN: Julian Assange, can you talk about ICWatch and what it is?

JULIAN ASSANGE: Well, ICWatch is a database of more than 27,000 profiles of people associated with the U.S. intelligence community or intelligence industry, so that includes people who work for government and people who work for private industry. It was created by a little journalism startup, a great bunch of guys, called Transparency Toolkit. And so they launched this a couple of weeks ago. This information was all originally in the public domain, or seemingly in the public domain, from LinkedIn, so these are CVs of people involved in various intelligence activities. By searching LinkedIn for key works, so they used, for example, the National Security Agency documents or names of special task forces or the, say, Joint Priority Effects List, the assassination program in Afghanistan, these were scraped out and then linked together so you can easily see, for example, who claims that they had worked at the National Security Agency at some stage or on various code-worded projects that the National Security Agency uses. As a result of doing that, they faced counterattack. And the counterattack was some quite serious death threats from—

AMY GOODMAN: This is for Intelligence Community Watch, ICWatch—

AMY GOODMAN: —for creating it, for indexing what already is in the public domain.

JULIAN ASSANGE: Indexing what was already public. An example of one of those death threats, from Washington, D.C., from a counterintelligence operative, who was also a former marine, saying that he would hunt them down and kill them no matter where they were in the world, and there’s no place in the world that they can hide.

AMY GOODMAN: As specifically what is quoted in your press release, “I promise [that] I will kill everyone involved in your website. There is nowhere on this earth that you will be able to hide from me.”

JULIAN ASSANGE: Yes. So I think that—and there was a number of other such threats.

AMY GOODMAN: How do you know who this is?

JULIAN ASSANGE: We have the email that it was sent from. Now, I think this—it actually perfectly explains why the U.S. intelligence community must itself be scrutinized. What do we have in that statement? Murderous criminal arrogance, and it’s somewhat megalomaniacal, as in “there’s nowhere in the whole world you can hide,” and vengeful. So—and I should add one further point: and deeply incompetent to, A, send such a message at all, but, B, this is a counterintelligence person. This is a person whose job it is to not allow secret information out. That’s their job. But they let that information—they themselves put that information on LinkedIn. They themselves are irritated about their own incompetence, to the degree where they get threatening to kill people involved with a journalism project.

AMY GOODMAN: So, this is an intelligence analyst, you say, in the Washington, D.C., area who put this information, his own, on LinkedIn. Have you handed this email over to the federal authorities in the United States to investigate the death threats?

JULIAN ASSANGE: They have handed the information over to their lawyers to take the next step. And there’s a question about whose side of the matter the federal authorities might be on, and would they use the investigation as, in fact, a way to investigate the criminal death threat, or would they actually use it as an excuse to investigate ICWatch.

AMY GOODMAN: And so, talk about—you have something like 140,000 entries here. So what are you doing with this, and how are people using it?

JULIAN ASSANGE: Well, as a result of those death threats, ICWatch came to us and said, “Can you make sure that this information will be protected?” They were also attacked electronically. So we, if you like, put ICWatch into the WikiLeaks system. It’s merged with all the other 8.3 million records. And so now it’s really quite powerful, and it is providing information on a lot of very serious programs that we didn’t know anything about. It’s also a great way for journalists to get people to talk to, because these are individuals, named individuals, saying that this year they worked in this particular program. And so, as a source of witnesses for prosecutions and for journalists, it’s a great resource.

I’ll give you an example, JPEL. If you search, go to WikiLeaks-dot—sorry, go to ICWatch.WikiLeaks.org and search for JPEL, or Priority Effects List. And that’s a name that is used for the U.S. assassination program in Afghanistan. We first revealed that in 2010, that that name was being used, and a task force associated with it, Task Force 373, but it has continued on and expanded in various ways. It has also brought in some NATO partners. That’s the joint aspect of it. But in the ICWatch information are individuals saying that they nominated 600 people to the JPEL. As a result, 37 of them were killed or captured. Others saying that they were directly involved in nomination for the purpose of kinetic targeting.

So, the U.S. has kind of made a bit of a legal—the Pentagon has made a bit of a legal ruse in terms of how it describes these assassination lists. They always say it’s a kill/capture list. And this is to create some kind of ambiguity, which is you go in to capture them, but they resist, and then they’re killed. But, in fact, in practice, it has come out that they’re destroying them; there’s no actual attempt to capture. And here we have evidence, confessions even, because it’s the individual concerned who has written the information, saying that, no, the purpose was always kinetic targeting involved in hundreds of nominations. There’s around 50 entries talking about—you know, bragging on their CV about how they were involved in these programs to assassinate people. Similarly with interrogations and detainee operations, people bragging on their CVs about how they oversaw 3,000 different interrogations, including of high-value detainees, high-value targets.

And new National Security Agency programs that we had not previously been aware of, even in the Snowden documents, because they give a list of codewords which they worked on. We know these ones, which is how we found the entry, but these programs we don’t know about. The CVs are great. I mean, you read a CV, and it’s all in context—the individual, what they did at the key dates, and giving the range of their work. So it’s not just some information about a particular keyword, but in context of the rest of the work they did that year and how the process integrates, what agencies they dealt with. So they brag about that they were liaising with the CIA and the DIA in relation to these assassinations.

AMY GOODMAN: And they talk about drone programs, being involved with drone targeting.

AMY GOODMAN: So perhaps if you have job openings, you might be concerned that someone actually who’s applying for a job might actually be a spy.

JULIAN ASSANGE: Well, I think that there’s a real question. If you look at some of these CVs, OK, for some people, they were involved in assassinating people, interrogating people, and then they’ve moved on. And where have they moved on? So they’ve moved into police. They’ve moved into careers advice at universities. So, you could be, you know, faced with a police interrogation, and that interrogator is someone who tortured people in Guantánamo Bay. I think there’s a real question about what the effect is on U.S. society, when you have all these people who have become used to torturing and killing people coming back and integrating back into society. And as far as I’m aware, no program to help them reintegrate and help them mobilize as they come back in. There’s a lot of debate about whether Guantánamo detainees could be brought to New York to be trialed. Are they too dangerous after the way that they’ve been treated in Guantánamo Bay? Or they’re an irritation to the United States. Are they too dangerous to have on U.S. soil? But I think the same question needs to be asked: Are Guantánamo Bay interrogators, are black site interrogators, are people involved in assassination programs too dangerous to be brought back in and enter into the police force or enter into university administrations or enter into the DOJ?

AMY GOODMAN: WikiLeaks founder Julian Assange, talking about ICWatch—that’s Intelligence Community Watch—speaking inside the Ecuadorean Embassy in London, where he has taken political refuge for the past three years. Coming up, Julian Assange will talk about the inside story about why the U.S. forced down the plane of Bolivian President Evo Morales in 2013 during the hunt for NSA contractor Ed Snowden. Stay with us. 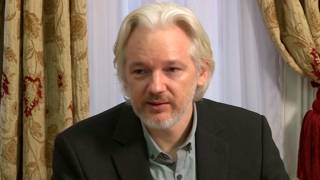