Watch Amy Goodman’s 2005 interview with people’s historian Peter Linebaugh about the Magna Carta’s history and how it relates to the U.S. prison at Guantánamo Bay.

Then be sure to catch our new interview with Limbaugh on the 800th anniversary of the historic manifesto, when he joins us from Lincoln Castle in Lincolnshire, England, where in a lockstone vault are kept the finest originals of the Magna Carta and the charters of English liberty.

StoryJun 15, 2015What Do 800-Year-Old Magna Carta & Black Lives Matter Have in Common? A People’s Historian Explains

AMY GOODMAN: What is the Magna Carta?

PETER LINEBAUGH: Magna Carta is a parchment document from the Middle Ages. June 15th, 1215, in a meadow in England on the River Thames, the big tyrant of the time, King John, Bad King John, was forced to sign this document, because he had been taxing people, he had been tyrannizing people, and actually he had been forcing women also to—he chose their husbands for them. So this Magna Carta put a limit on his authorities, on his tyrannies, and it described, really, for much of the world the right of resistance.

So, you go to Runnymede now, which is the meadow in England where this parchment document was sealed and signed, and the American Bar Association has put a plinth there, a memorial-like rotunda, and it says—tries to summarize the importance of Magna Carta by saying “liberty under law.” But they put this up in 1955, when they were really very conservative. But actually Magna Carta means “the king under law.” It means “authority or sovereignty under law.” And that’s what was so important to subsequent generations around the world, including Americans. And it’s also a theme that has been forgotten, and we need to recover it.

It still plays a very important part in law against tyranny. For example, last summer, in June 2004, when the Supreme Court admitted that the prisoners in Guantánamo Bay should have some kind of judicial hearing, Magna Carta was cited. Or last—two months ago, in December, the House of Lords in England struck down the English equivalent to the PATRIOT bill on the grounds of arbitrary arrest, putting people away without a trial or an indictment. And we’ve seen, in England, Ian Macdonald, for example, a barrister, has resigned from any of the kangaroo courts on the grounds that this is a violation of Magna Carta.

AMY GOODMAN: How does the Magna Carta relate to, for example, detentions at Guantánamo?

PETER LINEBAUGH: Really in two—I’m not sure I can cover it all, but you take chapter 39 of Magna Carta, probably the most famous clause. That is, you can still find it on courthouses in the United States. You can still find it in old constitutional books. It prohibits torture. And it says that no man—no free man may be arrested or imprisoned without due process of law and judgment by his or her peers. So you can see already, in quoting that chapter, as I’ve just done, that its provisions are violated in Guantánamo Bay, all four that I cited. There’s no jury trial. There’s without due process of law, without habeas corpus, and by the exercise of torture. So these are the ways that in Guantánamo Bay it is violated.

AMY GOODMAN: So why has the Magna Carta been forgotten?

PETER LINEBAUGH: Well, I think we haven’t been doing our job, us professors, I think, across the United States. You look at the neoconservative professors, and they also ignore Magna Carta. I think whatever the ideological background of professors, they have ignored it. It has—except for lawyers and except for other thinking citizens, really, from an older generation who still remember the lessons of World War II, which, remember, Bush now lies about. Remember his speech in Congress. He said, “We have our freedoms of religion, our freedom of speech,” but he completely omitted the freedom from want and the freedom from fear. So, in a way, he lied about that generation. And he’s not the only one. The rest of us might be forgiven because we weren’t taught, but it’s up to us, too, now to remember this, I think, as habeas corpus, trial by jury, due process of law are being violated, and Americans are asked to sacrifice their lives and to become killers in the name of freedom, but without understanding this basis of it.

AMY GOODMAN: How can you revive it? How can it be brought back into the discourse? How can it legally matter?

PETER LINEBAUGH: Yeah, well, this brings us to probably the most interesting thing to me now about Magna Carta and bringing it back. We’re not interested so much in bringing back a charter in an archival work. We’re interested in bringing back a spirit and a practice. And that spirit and practice now is, I think—in many parts of the planet, concerns not only defenses against tyranny, but it concerns powers of subsistence. So, whether you look at the tsunami self-activity of the victims or whether you look at the Niger River Delta or whether you look at the forest in Chiapas, those who have the least, those who have the greatest responsibilities—the parents, the mothers of children—must find a way for survival. And this is often done in terms of gathering wood, gathering waste products. Or, in the case of Nigeria, the women there wanted to gather the oil, to have access to these natural products. What I have found out, and others have found out, is that this also was an essential part to Magna Carta. And it was in chapter seven and with the allied forest of the charter. But in chapter seven, it specifically calls for the power of her reasonable estovers of common.

AMY GOODMAN: What is that word?

PETER LINEBAUGH: Estover, estovers of common. And “estovers” means her access to the hydrocarbon resources of the forest and the woodlands, for fuel, for building construction, for clothing, as the sheep would have pasture and their wools would be—wool would be made from their wool. The forest provided the healthcare system here, where the knowledge of pharmaceuticals was a knowledge of botany. So the widow, even though she was completely impoverished, she had access to the common resources, which were recognized as a fundamental part of Magna Carta and its accompanying Charter of the Forest.

And so, when we look around the planet today and we see how people are struggling for subsistence, their spirit, their practice, is that that was recognized long ago. And I think we must bring back these powers of subsistence. We must reclaim a commons that was acknowledged in Magna Carta. And I think that also we find it in the four freedoms and the struggle of the World War II generation, that the wealth of society belonged to all its members, particularly those who produced that wealth. And they realized that these two—sometimes people divide them between economic and political rights. Mary Robinson, for instance, did so when she spoke here in Ann Arbor, the former U.N. high commissioner of human rights and president of Ireland. So, it’s a timely issue across the planet.

AMY GOODMAN: Well, thank you very much for joining us. Thank you for beginning to bring it back. 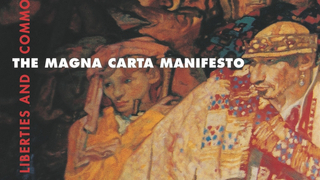