The Magna Carta turns 800 years old today. Known as the “Great Charter,” it is widely considered the foundation of parliamentary democracy, human rights and the supremacy of the law over the crown. As dignitaries including the queen of England and Prime Minister David Cameron commemorate the sealing of the historic text, we go to Lincoln Castle in England, where the finest originals of the Magna Carta and the charters of English liberty are kept in a lockstone vault, and speak with people’s historian Peter Linebaugh, author of “The Magna Carta Manifesto: Liberty and Subsistence for All.” He is attending the event to draw connections between the Magna Carta and the Black Lives Matter movement.

Web ExclusiveJun 15, 2015From the Vault: People’s Historian on How Magna Carta Provisions Are Violated in Guantánamo Bay

AMY GOODMAN: We end today’s show in England, where celebrations are underway marking the 800th anniversary of the Magna Carta, or Great Charter, considered by many to be the foundation of parliamentary democracy, human rights and the supremacy of the law over the crown. It was sealed June 15th, 1215. Thousands are gathering in the town of Runnymede near Windsor, Berkshire, to commemorate the sealing of the text. Dignitaries in attendance include the queen of England, Prime Minister David Cameron.

But we’re going to Lincoln Castle, about an hour from there, where the finest originals of the Magna Carta and the charters of English liberty are kept in a lockstone vault. And we’re joined there by Democracy Now! video stream, people’s historian Peter Linebaugh. He’ll speak at festivities there today about the relevance of the Magna Carta to the Black Lives Matter movement as well as Guantánamo. He’s the author of The Magna Carta Manifesto: Liberty and Subsistence for All.

Peter Linebaugh, welcome to Democracy Now! Describe where you are right now as you go into the significance of the Magna Carta.

PETER LINEBAUGH: Yes, I’m in the Bishop’s Palace, 50 feet from Lincoln Cathedral, adjacent to Lincoln Castle, where the Magna Carta is. Lincoln Castle became a prison. And this, for me, is an opportunity to read for us and your listeners from Magna Carta. “No free man shall be seized or imprisoned, or stripped of his rights … or outlawed or exiled, or deprived of his standing in any other way, nor will we proceed with force against him, or send others to do so, except by the lawful judgement of his peers and the law of the land.” Amy, those are the words from which habeas corpus, prohibition of torture, trial by jury and due process of law have stemmed from the last 800 years.

AMY GOODMAN: So, describe the Magna Carta. Some people might think it’s 800 pages, not 800 years old. But it is a simple document. Who wrote it? Who was it presented to?

PETER LINEBAUGH: It was an armistice, and it was about 20 inches by six inches. I just saw it recently. It is an armistice that concluded a civil war in England. Bad King John had squeezed the people of the forests of England for their money in order to recover lands in France and in order to enhance his own coffers. In reaction to that, the barons of England resisted. It was basically a conflict within the English ruling class, church and state. In fact, it was written in good part by Stephen Langton, the archbishop of Canterbury. However, both the big charter and the little charter depend and recognize the 90 percent of the people of England who were serfs and poor people and foresters and commoners. Amy, it took about 40 serfs to produce the food just for one horse of those barons and those knights. So while it was a document settling scores in the ruling class, that ruling class had to recognize the principle of the commons and had to recognize—well, in fact, it abolished capital punishment for killing of deer in the forests of England, a great step forward. It prohibited the disparagement of women. Its seventh chapter called for estovers of the widow in the common. Basically, it meant that she could have her fuel, she could have tools, she could have repairs for her house from the forest. And remember that the forest and woods, that was the petroleum of that epoch. That is, so many materials, so much wealth came exclusively from wood. So, for a woman or a widow, in particular, to have access to the commons meant survival.

AMY GOODMAN: So, relate it to the movements and happenings today—for example, the over a hundred men who are held at Guantánamo, how habeas corpus relates to the Magna Carta—and then talk about the Black Lives Matter movement.

PETER LINEBAUGH: OK. Well, habeas corpus was a sheriff’s writ, and it just meant “giveth the body.” That’s the Latin. But a few hundred years ago, English law began to see this writ as a principle deriving from that chapter which I read to you, that you can’t—that sovereignty cannot seize a person or imprison them or send force against them except by judgment of their equals or, you know, a trial by jury. This pertains to the people in Guantánamo Bay who have not had a charge. There’s been no indictment. No criminal law has been violated. The state has not been forced to explain itself. Certainly, they’ve not had a trial. So even the U.S. Supreme Court, in a case called Boumediene, referred to Magna Carta as being violated by this practice.

As concerns Black Lives Matter and the movement, that so far, I think, this year 464 people have been killed by the police, this is sending force against people without trial by jury, not in accordance with the law of the land. And so, when Black Lives Matter began, after the—last August, after the killing of Michael Brown, many of us remembered that slavery itself came to an end thanks to Frederick Douglass’ references to Magna Carta. So Magna Carta has played a major role in American history in the freedom struggle led by former slaves and the African-American population. This is why Black Lives Matter is so important, not only against the racist power structure and the forms of white supremacy that exist in so many ruling institutions, but it’s also a recovery of this long tradition of struggling against sovereignty in the name of habeas corpus, trial by jury and prohibition of torture.

I think, Amy, it’s significant for another reason, which we’ve seen. The Guardian newspaper is now crowdsourcing the police killings. In other words, the FBI and the federal government is incapable and has neglected to keep count of those whom authority has slaughtered or has killed. Now, The Guardian is showing us—an English newspaper is taking the lead in providing us with this important information of state killings.

AMY GOODMAN: Peter Linebaugh, today, the prime minister of—the British prime minister, David Cameron, spoke of the need to reform U.K. human rights, to safeguard the Magna Carta’s legacy. The Guardian reports his speech was seen as a sign of the government’s commitment to break the link between the British courts and the European Court of Human Rights.

PETER LINEBAUGH: Well, this is a subject where many, many people in Great Britain are outraged. Remember, David Cameron is a—had a very small minority of the popular vote in the recent election. He is committed to withdrawing from the European human rights. And I haven’t heard the speech myself, so I can’t comment in detail about it. But it seems to those of my colleagues here that this is a profound and unpopular retrogression.

AMY GOODMAN: The New York Times headline today, “Magna Carta, Still Posing a Challenge at 800.” Scholars argue, guiding principle or just a useful myth? And then, under the photograph of the Magna Carta, it says, “A photo of a … version of Magna Carta [in the National Archives]. Some legal scholars believe that the charter is [no] big deal.” Where do you fall, Peter Linebaugh?

AMY GOODMAN: Now, you’re sitting in a room right now, but I was wondering if it’s possible—and I’m taking a risk here because this is live television and radio—could you pick up the computer and show us what it looks like right outside? I think your window looks over Lincoln Palace, where I was just speaking to you right before the broadcast. So here is Peter. He’s walking over to the window. And we’re looking outside. And describe, Peter—yes, that’s very good. You can lower it a little bit. Describe what it is that we see out there.

PETER LINEBAUGH: Well, you see a very well-to-do tea garden, that would do for a Jane Austen movie. Then you see workers’ housing, and you see some roofs of factories, which at one time was a foundry. And then, beyond, you see Lincoln Common. So you see an area similar to your Central Park in New York, which is land for the use and recovery of all.

PETER LINEBAUGH: I’m at Lincoln Palace, thanks very much to Ann, whose Voices from Lincoln is leading festivities here. And I’m also grateful to two artists. And I think it’s significant for us that it’s artists who around the world are helping us to restore our imagination. And it’s people like Ann who are calling out to ordinary voices and to lost and common folk to bring to us the meanings of Magna Carta, the meanings of the commons. We can’t rely on the queen and the prime minister and their ilk for this knowledge.

AMY GOODMAN: Peter Linebaugh, we want to thank you very much for joining us, people’s historian, retired from the University of Toledo, author of the book, The Magna Carta Manifesto: Liberties and Commons for All. He joins us from Lincoln Castle in Lincolnshire, England, where in a lockstone vault are kept the finest originals of the Magna Carta and the charters of English liberty. He’s speaking there tonight about the relevance of the Magna Carta to the Black Lives Matter movement. We’ll link to details on our website, as well as our previous interview with Professor Linebaugh on Guantánamo and habeas corpus.

That does it for our broadcast. Democracy Now! is hiring a senior news producer and an engagement editor. Find out more at democracynow.org. Both full-time jobs based here in New York City. 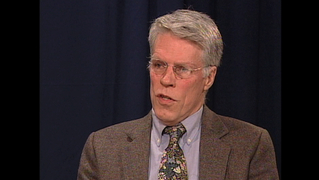