The Yes Men Are Revolting: In New Film, Legendary Pranksters Take On Polluters Behind Climate Change

Image Credit: "The Yes Men Are Revolting"
This is viewer supported news. Please do your part today.
Donate

While kayaktivists took to the water in Seattle to protest Shell’s plans to drill in the Arctic, the culture jamming group The Yes Men staged a different kind of anti-Shell protest last week. They took to the streets of New York posing as representatives of Shell. They handed out free shaved ice cones which they claimed were “remnants of the last icebergs of the North Pole.” The action took place as the anti-corporate pranksters launched their third film, “The Yes Men Are Revolting,” which looks at the group’s many actions around climate change. The Yes Men’s Andy Bichlbaum and Mike Bonanno join us to discuss the film and their ongoing brand of signature anti-corporate pranksterism.

AMY GOODMAN: We end today’s show around this issue. Aaron?

AARON MATÉ: While kayaktivists took to the water in Seattle to protest Shell’s plans to drill in the Arctic, the culture jamming group The Yes Men staged a different kind of anti-Shell protest last week. They took to the streets of New York posing as representatives of Shell, handing out free shaved ice cones, which they claimed were, quote, “remnants of the last icebergs of the North Pole.”

MIKE BONANNO: My name is Alexander Jordan, and I’m here with Shell Oil. As you know, we are going to the Arctic. We’re the first to drill up there. And so we have brought back people’s first taste of the last frontier: 10,000-year-old iceberg ice directly from the Arctic to the people in New York who are suffering on a very hot day.

“SHELL” EMPLOYEE 3: Our country was built on exploiting opportunities like this. This is American capitalism in action, and this is the best of what this country is all about.

MIKE BONANNO: How does that feel?

CUSTOMER 2: It felt kind of sad, considering that in class they tell us that the more they melt, the more global warming. And so, I was like, maybe I shouldn’t be eating it.

ANDY BICHLBAUM: Risk is an essential part of life. You know, if cavemen had been afraid of risk, nobody would have ever invented fire, because it might set the cave on fire, you know? So, we have to take risks. And we need to be able to profit from it. That’s the American way of life.

AMY GOODMAN: The American way of life. Yes, another action by the legendary anti-corporate pranksters, The Yes Men, this time posing as representatives of Shell Oil. Joining us now, the very guys you just saw in that video, Andy Bichlbaum and Mike Bonanno of The Yes Men. They’ve just released their third movie, titled The Yes Men Are Revolting.

Andy, describe this last scene that we just—that you just participated in here in New York.

ANDY BICHLBAUM: Well, this was a little action we did in the streets of New York to kind of go further in alerting people about this grotesque situation with Shell heading to the Arctic. In our film, we really focus on that quite a bit. There’s two big scenes about Shell’s Arctic drilling plans. But that was four years ago, and now it’s happening again. So it’s really time for people to exert pressure on the Obama administration, and really intense pressure, to make sure it doesn’t happen.

AMY GOODMAN: Let’s go to a clip that you’re describing from The Yes Men Are Revolting, The Yes Men posing as Shell Oil executives at an Arctic drilling launch party at the Space Needle in Seattle.

“SHELL” EXECUTIVE: Of course, climate change is scary. The end of civiliation, I mean, that’s bad. But in life, as in business, pragmatism trumps all. Drilling in the Arctic, let’s go! We’re pumped. We’re pumped. This is a scale model of the Kulluk, which in Eskimo means “thumbs up.” The miniature Kulluk is designed to kick off the festive part of the evening by delivering another precious fluid that we may imbibe. And so we’re going to pour a ceremonial glass here, and, though, I would like to be joined by our special guests. So, the widow of the late great designer of the Kulluk, Mrs. Enid Appleby, we would like you to have the first glass poured from the little Kulluk.

“SHELL” EXECUTIVE: So, put your glass right over here, Enid, and we’ll fill you up.

ENID APPLEBY: Oh, my goodness! Who is responsible for this disaster?

AMY GOODMAN: That’s a clip from The Yes Men Are Revolting, new film out. But it is true, what you did. Mike Bonanno, explain what she was screaming about. Set the scene.

MIKE BONANNO: All right. So what’s happening there, inside the Space Needle, is there’s a big party. There’s a fake iceberg, and there’s an oil slick and—I mean, there’s a drilling rig that’s actually pumping, meant to pump the drinks for the party. And it goes wrong, and it sprays this old woman, who happens to be Dorli Rainey, the Occupy activist, who was collaborating with us, in the face, and she kind of goes nuts, and the crowd is very shocked.

AMY GOODMAN: Because the crowd is?

MIKE BONANNO: Well, it’s a mixture of businesspeople from the Seattle area, whoever we could invite to the Space Needle, and then—

MIKE BONANNO: Yeah, there’s about half of them that are collaborators, sort of along for the ride, and then there’s half of them that don’t know, and they’re watching. And the whole purpose of it ends up being to release a viral video of this accident at the party, that shows what could really happen. I mean, the drill rig can malfunction. I mean, it will malfunction. There always are spills. And so, this became a sort of viral media sensation before people realized that it was a fake and that the party was not a real Shell party.

AARON MATÉ: Mike, as Andy said, the focus of this film is climate change. But we also see a very personal side of you guys, though. We follow you as you try to raise a family while still being an activist. We see the toll that activism takes on you, Andy, in your love life. Why did you decide to go so personal in this, your third film?

MIKE BONANNO: Well, I mean, for one thing, it makes a more compelling film. People can engage more with it. They identify with the same problems they have in their lives. But also, it’s about activism in general and what it means to be an activist and still, you know, have to deal with the pressures of everyday life and how you keep going and how you overcome it. And ultimately, what we discover in the course of doing this is that you need to join a movement. You need to be part of a thing that’s bigger than yourself.

AMY GOODMAN: So let’s talk about this Yes Men movement with another clip from The Yes Men Are Revolting.

ANDY BICHLBAUM: OK, what you’re seeing here are SurvivaBalls. They are self-contained units that will allow somebody to survive no matter what happens to the climate. So they can surive six months of drought, Category 4 hurricanes, any kind of tornado. They’re fully equipped for anything.

SURVIVABALL USER: Everybody ready with the turtle position in case of a terrorist attack.

ANDY BICHLBAUM: We’re launching a flotilla of a hundred SurvivaBalls to the United Nations, and we’re going to say that if you don’t come to an agreement to reduce greenhouse gases, this is what the future is going to look like. Right now, the current is just right to take these SurvivaBalls to the United Nations. No one is expecting them—except for that Coast Guard, except for that police boat, Coast Guard boat. But it’s small. That probably isn’t a machine gun mounted on its front end, so there’s probably nothing to worry about.

AMY GOODMAN: That’s another clip from The Yes Men Are Revolting, but actually a scene of a real-life launch. Andy Bichlbaum—

ANDY BICHLBAUM: Well, the SurvivaBalls are these props, basically, to open the film. But the film is really, ultimately, about Occupy. And the reason you see us getting depressed and losing hope and so on is so that we can come out and get hope, once we see Occupy, where a lot of people would come up and tell us they had gotten their start in activism by seeing one of our movies. So all of the things that we thought didn’t work or didn’t matter or didn’t have an impact ultimately did, through the bigger movement they were a part of. And that’s the message of our film, that you’ve got to be a part of a bigger movement. And that’s where impact happens. They all win.

AMY GOODMAN: And I want to thank you for being with us, Andy Bichlbaum and Mike Bonanno, members of The Yes Men. The Yes Men Are Revolting is the name of the film.

This is Democracy Now!, and we have two job openings: a senior news producer and an engagement editor. Find out more at democracynow.org. 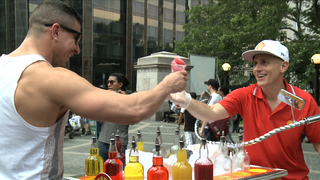