Twin Peaks Charter Academy has announced the the school will launch an investigation into Principal BJ Buchmann’s decision to cancel Evan Young’s coming-out graduation speech. The school has defended decision by saying “the Valedictorian failed to follow the guidelines established by the school. The initial draft of the student’s speech submitted for review was condescending toward the school and the student’s peers and included, among other things, ridiculing comments about faculty and students. The draft speech also included references to personal matters of a sexual nature.” We go to Washington, D.C., to speak with Rep. Jared Polis (D-Colorado) who called for the school probe. He is the first openly gay member of Congress to become a parent.

NERMEEN SHAIKH: Joining us now from Capitol Hill is Congressman Jared Polis from Colorado. He’s the first openly gay member of Congress to become a parent. He wrote a letter earlier this week to Twin Peaks Charter Academy that prompted the school to launch an investigation into Principal BJ Buchmann’s decision to cancel Evan Young’s graduation speech. In a press release, the Twin Peaks Charter Academy initially explained its decision by saying, quote, “the Valedictorian failed to follow the guidelines established by the school. The initial draft of the student’s speech submitted for review was condescending toward the school and the student’s peers and included, among other things, ridiculing comments about faculty and students. The draft speech also included references to personal matters of a sexual nature.”

AMY GOODMAN: Congressmember Jared Polis, welcome to Democracy Now!, joining us from the Cannon Rotunda. First, can you tell us what you thought when you heard Evan give his speech at Out Boulder, the first time he gave that speech, instead of two weeks before when he planned to, May 16th, at his graduation as the valedictorian? And then talk about what you’re demanding right now.

REP. JARED POLIS: Well, what a shame that what should have been a celebratory occasion for Evan and his family, having achieved a great GPA and being named valedictorian of the school, instead was forever marred. And, of course, the concerns are beyond just the experience of Evan and his family, but the signal this sends to gay and lesbian kids across our county, across our state and across the country in terms of what coming out means and the support level that they can expect. So, an unfortunate turn of events. There have been other students that have been treated much more fairly. A student in Carbondale, Colorado, happened to mention that she was gay during her graduation speech and met great support from the community. And I think it was inappropriate that it seems like Evan was really singled out and removed from a speaking role on the basis of his sexual orientation, which is really inappropriate.

So, at this point, what we’re looking for is really to find out what happened, and was Evan removed just because of his sexual orientation, and what steps can the school take to ensure that they address the concerns in the public perception, and, in fact, can provide a welcoming and safe environment for LGBT students going forward.

AMY GOODMAN: Well, can you say exactly what you’ve demanded, the course of action that has taken place since you heard what happened to Evan, the letters you’ve written, what they’ve responded, and going beyond the charter school itself?

REP. JARED POLIS: Well, so far, there has really been no acknowledgment that there was any wrongdoing or mistake from the school’s perspective. So I think what should occur is a thorough investigation that has stakeholder buy-in, meaning the district should be involved, St. Vrain School District. They should make sure that it’s a process that equality advocates sign off on and a fair and reasonable process. I don’t think anybody wants to prejudge anybody with regard to this. And we need to find out what exactly occurred and what the proper steps that the school should take to ensure that it sends the message that it has a welcoming environment for all learners.

REP. JARED POLIS: Like in many states, Colorado has a charter school law. Charter schools are public schools, but they receive waivers from many district policies. For instance, they can set their own personnel policy, their own school hours, their curriculum, to a certain extent. And they request those waivers formally; it’s not an informal thing. They’re formally granted to them in the process of a charter. But under state and federal law, there’s also certain policies and laws that are nonwaivable, meaning charters have every bit of the same responsibility as other public schools to follow them. And that would include nondiscrimination laws in the state of Colorado, as well as laws about making sure they serve the needs of special education students and a number of other laws, as well, that they’re just as subject to as any other school. So, we’ve really called upon the district, St. Vrain district, in their role as an authorizer—they’re effectively the link between this public charter school and the public education system—to ensure that those items that are not waived—in this case, the nondiscrimination law—is applied correctly at the St. Vrain charter school called Twin Peaks Academy.

NERMEEN SHAIKH: And you also point out, Congressman Polis, in your letter that this decision by the school could result in their charter being terminated. It is because of this question of discrimination.

REP. JARED POLIS: Well, that’s something that the school should be concerned about. Obviously, termination would only occur in extreme circumstances. This is a relatively easy situation to address. Thus far, unfortunately, the school has resisted a lot of the constructive community and district efforts to address it. So, hopefully, the school will be willing to address this issue. There’s no reason it should come to anything other than making sure that the school is serving all learners in a safe and accepting learning environment.

AMY GOODMAN: So, just to clarify, at this point, has the charter school said it will conduct an investigation of itself?

REP. JARED POLIS: Well, they’ve said they’re going to look into things internally. But what they haven’t done is involved the district or any external validator. So, the school alone can’t drive the process, the sort of judge and jury. They need to make sure that there’s a multi-stakeholder process that certainly involves the district, so there’s public confidence in the outcome of any investigation.

AMY GOODMAN: Interestingly, the superintendent of St. Vrain’s, of the overall school district, that includes the public and the charter schools, Dr. Don Haddad, was voted the best superintendent in the country last year. Have you gotten a chance to talk with him?

REP. JARED POLIS: The school district and Dr. Haddad have been extremely constructive through this process. I think that, as a value, the board strongly believes in serving all learners and making sure that the nondiscrimination statutes of the state, as well as the district’s equal education policies, which go beyond the state, are applied across St. Vrain schools. So I think they certainly have that commitment. And I know that the community is also strongly supportive of making sure that public schools serve all learners.

AMY GOODMAN: Do you think BJ Buchmann, the principal of the Twin Peaks charter school, should be fired, should be removed from his position?

A Victory for Privacy or Extension of Mass Surveillance? Co-Sponsor of USA FREEDOM Act Rejects Bill 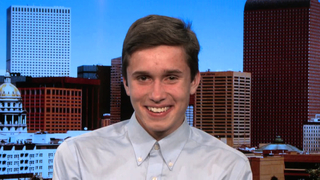