Next month marks the 30th anniversary of a turning point in the history of Greenpeace. On July 10, 1985, the Greenpeace flagship Rainbow Warrior was bombed by French government agents and sunk in a harbor in Auckland, New Zealand. The ship was preparing to head to sea to protest against French nuclear bomb tests in the South Pacific. Greenpeace photographer Fernando Pereira was killed in the attack. Our guest Peter Willcox was the captain of the ship and on board when the boat was blown up.

StoryAug 23, 2019Sen. Merkley on the Dangers of a New Nuclear Arms Race & Why He Backs the Green New Deal

AMY GOODMAN: Next month marks the 30th anniversary of a turning point in the history of Greenpeace. It was July 10th, 1985, the Greenpeace flagship Rainbow Warrior was bombed by French secret service agents and sunk in a harbor in Auckland, New Zealand. The ship was preparing to head to sea to protest against French nuclear bomb tests in the South Pacific. Greenpeace photographer Fernando Pereira was killed in the attack. Our guest, Peter Willcox, was the captain of the ship. He was on board the boat when it was blown up. This is an excerpt from Bombing of the Rainbow Warrior by Television New Zealand.

NARRATOR: The Rainbow Warrior is welcomed by a flotilla of small boats. It’s the time of French nuclear testing in the Pacific, and some of these yachties plan to accompany the Greenpeace mothership to Moruroa Atoll to protest. Greenpeace photographer Fernando Pereira had waved goodbye to his family in Amsterdam a month earlier.

MARELLE PEREIRA I remember me saying then, I don’t know why, but, “Daddy, don’t go, because if you leave, you’re not coming back,” and, of course, he then telling to a child, “No, dear, I’m coming home.”

NARRATOR: Steve Sawyer, worldwide director of Greenpeace, he lost a ship and a friend, Fernando.

STEVE SAWYER: They make great show about how it was not designed to cause any loss of life, which is total rubbish. I mean, if—we were very lucky that a lot more people weren’t killed.

AMY GOODMAN: You were there, Peter Willcox.

AMY GOODMAN: You were actually on board?

AMY GOODMAN: You were sleeping? It was the middle of the night?

PETER WILLCOX: I was sleeping in my bunk, yeah.

AMY GOODMAN: As was Fernando?

PETER WILLCOX: Yeah. Just to echo what Steve said, the bombs were so powerful that it was just a miracle we didn’t lose more people. If they had gone off half an hour sooner, we could have lost 10 more people.

AMY GOODMAN: But there weren’t—it wasn’t just one bomb, right?

PETER WILLCOX: No, it was two.

AMY GOODMAN: So that’s how you got out.

PETER WILLCOX: Well, the first bomb put a six-by-seven-foot hole in the engine room. The second bomb was placed on the propeller shaft. It went off maybe a minute after the first bomb. And I was standing right over it when it went off. And it was that bomb that trapped Fernando Pereira in his cabin and caused him to drown.

AMY GOODMAN: Because he had run back in to get his cameras.

AMY GOODMAN: So, 30 years later, you are still at it, Captain Willcox. Is this really worth the risk?

PETER WILLCOX: Oh, the alternative for me is not leaving my children a place where they can safely bring up their own children. I think that’s how critical it is. I have two daughters in their twenties. I think they’re both really nervous about the future, and for very good reason. We know what climate change is doing. Look at the drought in California. We’re the richest country in the world. We can support, if you will, a drought. Countries like in East Africa and other places in the world, Bangladesh, where it’s going to displace millions of people, they can’t deal with it. And it’s coming. And it’s only coming because we’re not willing to change the way we produce energy, we make energy. We have the technology. We don’t have the will. And that’s just ridiculous.

AMY GOODMAN: Do you have plans for another journey?

PETER WILLCOX: Sure. I’m going out in three weeks.

AMY GOODMAN: Where are you going?

AMY GOODMAN: I just want to step back for a second. How is it proved that it was the French secret service agents did this?

PETER WILLCOX: Well, they were caught red-handed. They were caught 30 hours later returning a camper van to Auckland, two—a man and a woman pretending to be Swiss tourists. The police interrogated them all day, took them to a hotel that night and said, “Look, we’re really sorry we arrested you. We’re going to take you to the airport tomorrow. Use the phone. Call room service. Don’t leave the room.” They got on the phone, called up [DGSE] headquarters in Paris and said, “Hey, we did the job, but we’ll be delayed a day.” And then, within hours, they found out that their passports were fake from Switzerland. So it was—and they went back into it—

BEN STEWART: They paid compensation in the end, didn’t they?

PETER WILLCOX: They paid compensation to us and New Zealand, yeah.

PETER WILLCOX: I’m not waiting for it.

BEN STEWART: It’s “Ne ver’, ne boisya, ne prosi,” a Russian phrase that the prisoners were told when they arrived how to survive jail. So their fellow cellmates said, don’t trust, because—don’t trust the prison officers, that’s disrespecting yourself; don’t fear, because that gets you nowhere; don’t beg, because no one ever begged their way out of jail.

AMY GOODMAN: Well, I want to thank you both for being with us. Don’t Trust, Don’t Fear, Don’t Beg: The Extraordinary Story of the Arctic 30 is by Ben Stewart, our guest, and thank you so much to Captain Peter Willcox. 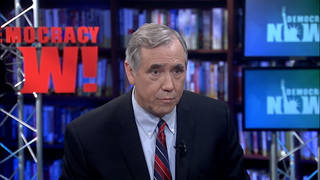