With Historic Iran Nuclear Deal Expected, Can President Obama Sell It to Congress and the Public?

We go to Vienna for an update on what could be the final stages of a historic deal between Iran and six world powers that would limit Tehran’s nuclear ability for more than a decade in exchange for sanctions relief. Negotiators are still smoothing over key details, including what limits to set on Iran’s nuclear research, the pace of sanctions relief and whether to lift a United Nations arms embargo on Iran. If a deal is brokered, Congress will have 60 days to review it, keeping U.S. sanctions in place in the meantime. An extra 22 days are set aside for voting, a possible presidential veto and then another vote to see if opponents can muster 67 Senate votes to override the veto. We speak to Flynt Leverett, who is following the talks. He is author of “Going to Tehran: Why America Must Accept the Islamic Republic of Iran” and is a professor of International Affairs at Penn State. He served for over a decade in the U.S. government as a senior analyst at the CIA, Middle East specialist for the State Department, and as senior director for Middle East affairs at the National Security Council.

AMY GOODMAN: We turn now to what could be the final step in an historic deal between Iran and six world powers that would limit Tehran’s nuclear ability for more than a decade in exchange for sanctions relief. Negotiations over Iran’s nuclear program entered their 17th, and possibly last, day in Vienna today, as the interim agreement is set to expire at 6:00 p.m. Eastern Standard Time tonight. Secretary of State John Kerry told reporters he is confident a deal is within reach, but negotiators in Vienna are still smoothing over key details, including what limits to set on Iran’s nuclear research, the pace of sanctions relief and whether to lift a United Nations arms embargo on Iran. If a deal is brokered, Congress will have 60 days to review it, keeping U.S. sanctions in place in the meantime. An extra 22 days are set aside for voting, a possible presidential veto and then another vote to see if opponents can muster 67 Senate votes to override the veto. Meanwhile, the Iranian president, Hassan Rouhani, is set to address Iran on the nuclear deal in the next few hours.

For more, we go to Vienna, Austria, where we’re joined by Flynt Leverett, who’s there following the talks, author of Going to Tehran: Why America Must Accept the Islamic Republic of Iran. He’s a professor of international affairs at Penn State, served for over a decade in the U.S. government as a senior analyst at the CIA, a Middle East specialist for the State Department and as senior director for Middle East affairs at the National Security Council.

Flynt Leverett, welcome back to Democracy Now! What is happening at this moment in Vienna?

FLYNT LEVERETT: Thank you. I believe that a final agreement is going to be reached here. What we’re watching now is a very, very slow, excruciatingly slow, process. The negotiators here have basically finished their work. Texts have gone back to national capitals for final review. And especially on the U.S. side, this process of review within the Obama administration is moving along very, very slowly. To the best of my knowledge, the White House has not come back with specific concerns, specific points that it wants, in effect, to renegotiate, but it seems like the Obama administration is being very deliberate, to say the least, in reviewing the work that is done here. And that means—you know, if one of the parties is slow, it means it delays the time at which people can produce final text, text that can basically be released to the world when the parties are ready to announce. That’s what we’re watching right now. But I still think we’re going to get to a final agreement very soon.

AMY GOODMAN: Can you talk about the main issues that are in this agreement and those left to resolve?

FLYNT LEVERETT: Yes. The main issues, which, to the best of my understanding, have been resolved, are the nature of the limits on its nuclear activities that Iran will observe while an agreement is in place; the pace and scope of sanctions relief for Iran, sanctions lifting, has been worked out. Over the last few days, the main issues that needed to be worked through concern precise terms on specific parts of a new United Nations Security Council that will lift—that will nullify previous resolutions related to the Iran nuclear issue, remove international sanctions against Iran authorized by the Security Council, including the arms embargo, and formally launch implementation of this agreement. To the best of my understanding, the negotiators here have basically reached an understanding about the terms of the Security Council resolution, but, as I said, it’s being reviewed in national capitals, and that review process is going especially slowly in Washington.

AMY GOODMAN: On Sunday, Israeli Prime Minister Benjamin Netanyahu denounced the pending Iranian nuclear deal being sought by the international negotiators. This is what he said.

PRIME MINISTER BENJAMIN NETANYAHU: [translated] Iran does not hide its intention to continue its murderous aggression, even against those with which it is negotiating. Perhaps there is somebody among the powers who is willing to capitulate to the reality that Iran is dictating, which includes its repeated calls for the destruction of Israel. We will not accept this.

FLYNT LEVERETT: Well, I mean, certainly no surprise that Prime Minister Netanyahu would say that. You know, America’s traditional allies in the region—Israel and Saudi Arabia—both have been working to undermine a deal. Even if they are not able to stop a deal—and I don’t think they will be—they are working very hard to put as much pressure as possible on the United States so that a nuclear agreement doesn’t become a critical first step in a broader realignment of U.S.-Iranian relations.

My own view, my wife and I, both in government and in the years since we left government, have argued vociferously that, for its own interest, the United States desperately needs to come to terms with the Islamic Republic of Iran, this increasingly important power in the Middle East. It needs to balance its traditional, but increasingly dysfunctional, relationships with Israel and Saudi Arabia with strategically grounded engagement with Iran. This nuclear deal could be a critical first step in that direction. It’s one of the reasons that I’m here, to try and help make that argument.

But, you know, there are a lot of pressures on the Obama administration, and I’m not sure there’s a real consensus within the administration to use a nuclear agreement, which, as I said, I think we will get here within relatively short order—I don’t think there’s that kind of consensus within the administration to use a deal as the springboard for what I think is an imperative realignment of U.S. relations with Iran. The U.S. needs to revamp its approach to the Middle East. And a critical, essential step in that revamping will be realigning U.S. relations with Iran.

MAJORITY LEADER MITCH McCONNELL: Well, look, we already know that it’s going to leave Iran as a threshold nuclear state. We know that. It appears as if the administration’s approach to this was to reach whatever agreement the Iranians are willing to enter into. So I think it’s going to be a very hard sell, if it’s completed, in Congress.

AMY GOODMAN: The Republican majority is expected to vote against the deal and to try to convince at least 12 Democrats to join their ranks in an attempt to defeat a presidential veto. Flynt Leverett, explain what has to happen in the United States for the U.S. to approve this. What is the voting that will take place?

FLYNT LEVERETT: Yes. Both houses of Congress will have 60 days to review the agreement once it’s finalized. I think it is quite possible, if not likely, that a simple majority of members in each house will vote a so-called resolution of disapproval in regard to the agreement. At that point, President Obama has said that he would veto those resolutions of disapproval. And at this point, the White House seems pretty confident that they have the votes, at least in the Senate, and perhaps in the House, as well, to sustain President Obama’s veto. So, they are confident that if you can get to an agreement here in Vienna, that it will ultimately get through the congressional review process and will go into effect.

But obviously, during the next—you know, the 60 days following a conclusion of an agreement, the Israelis, the Saudis, their friends and allies in the American political system, others who don’t want to see this agreement go forward are going to be working very hard, trying to turn public opinion against the deal and trying to build congressional support to maximize the vote against the deal.

Public opinion polls would show that Americans are open to supporting this deal, but one of the things I really worry about is that President Obama himself has not really made the strategic case for why doing this deal and for why building a different kind of relationship with Iran is so strongly in America’s interest. He either talks about this as a kind of narrow arms control agreement, but Iran is still this very bad actor, or he talks about it in terms of it being an opportunity for Iran to rejoin the international community, as he puts it. This is not the way to sell this deal to Americans. Americans understand that what the United States has been doing in the Middle East for the last decade and a half has actually been profoundly against American interests. It’s also been very damaging to Middle Easterners. But it has been profoundly damaging to America’s position in this critical part of the world and globally. President Obama has a chance here to begin to turn that around and put U.S. policy toward the Middle East on a more different and more productive trajectory, but he is going to have to make the strategic case—

AMY GOODMAN: Flynt Leverett, we’re going to have to—

AMY GOODMAN: We’re going to have to leave it there, but we’ll continue to follow this, of course. 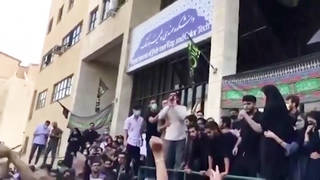