On Thursday, a gunman opened fire on two separate military sites in Chattanooga, Tennessee. The rampage left four marines and the gunman dead and at least three people injured. The Tennessee shooting came as a jury in Colorado announced its verdict in one of the deadliest mass shootings in U.S. history. Almost exactly three years ago, on July 20, 2012, James Holmes walked into a movie theater in Aurora, Colorado, and opened fire, killing 12 people and injuring 70 others. On Thursday, the jury found him guilty of 165 counts of first-degree murder and attempted murder. Holmes now faces a lengthy sentencing process which could result in the death penalty.

JUAN GONZÁLEZ: Today marks one month since the massacre of nine African-American churchgoers in Charleston, South Carolina, and the United States is reeling from yet another mass shooting. On Thursday, a gunman opened fire on two separate military sites in Chattanooga, Tennessee. The rampage left four marines and the gunman dead and at least three people injured. The shooter has been identified as Mohammod Youssuf Abdulazeez, a 24-year-old Kuwaiti-born U.S. citizen who attended high school and college in Chattanooga.

AMY GOODMAN: While the U.S. attorney for the Eastern District of Tennessee said federal authorities were, quote, “treating this as an act of domestic terrorism,” the FBI said it does not have “anything that directly ties” the suspect to international terrorist groups. Speaking Thursday, just weeks after he eulogized Charleston massacre victim Reverend Clementa Pinckney, Obama informed the nation about another mass shooting.

PRESIDENT BARACK OBAMA: I’d ask all Americans to pray for the families who are grief-stricken at this point, and I want everybody to understand that we will be thorough and prompt in figuring out exactly what happened.

JUAN GONZÁLEZ: The Tennessee shooting came as a jury in Colorado announced its verdict in one of the deadliest mass shootings in U.S. history. Almost exactly three years ago, on July 20th, 2012, James Holmes walked into a movie theater in Aurora, Colorado, and opened fire, killing 12 people and injuring 70 others. On Thursday, the jury found him guilty of 165 counts of first-degree murder and attempted murder. The jury rejected attempts by the defense to convince them Holmes was legally insane at the time of the shooting. Holmes now faces a lengthy sentencing process which could result in the death penalty.

AMY GOODMAN: In a statement Thursday, Dan Gross, president of the Brady Campaign to Prevent Gun Violence, said, quote, “This is one of the most significant days in American history when it comes to gun violence. The same day a jury handed down its verdict on a man for carrying out mass murder in a Colorado movie theater, another went on a deadly rampage killing four American Marines. If this doesn’t cause policymakers to stop and think about the impact of gun violence in our country, what will?”

Mark, welcome to Democracy Now! Can you respond to what took place yesterday—in Chattanooga, the four marines killed, and then, again, we are reminded of what took place in Aurora with the guilty sentence for James Holmes?

MARK FOLLMAN: Good to be with you, Amy. Sure. I think yesterday was extraordinary in some ways, the confluence of these events, the guilty verdict in Aurora and then a fresh event like this again in Tennessee. We have looked at mass shootings data from the last three decades, studied it closely over several years now, and these events just keep happening. And there has been some debate in the recent past about whether or not they’re occurring more frequently, and we now know definitively that they are, through the data that we’ve collected at Mother Jones and analysis we did in partnership with some researchers at Harvard University. These types of public mass shooting attacks have been on the rise for several years. They’re occurring at a significantly higher rate.

JUAN GONZÁLEZ: Now, that’s in the face of a crime rate that generally keeps—has been plummeting in the United States, but these mass shootings have been increasing. Have you tried to ascertain or do any analysis why?

MARK FOLLMAN: It’s a great question. It’s hard to explain. I think it’s a very complicated set of factors that go into this. And I should add, too, that the data that we collected is, in some sense, very conservative. It’s a narrow estimate of this problem, because we only look specifically at public mass shootings of this type. And you have a lot of other similar types of gun crimes. There are a very high number of domestic mass shootings that happen in our country, where people kill their whole families. Those happen, in fact, more often than the public events.

And the other aspect of this is that the way that these are measured, the way that we did it, uses a baseline threshold of fatalities of four or more people killed. This was a criterion established by the FBI about a decade ago in talking about mass murder, and it’s generally been the accepted way of defining a mass shooting, although it’s not a very clearly defined problem. If you think about it, that’s in some ways a very artificial construct. If you take away just one in that count and say three people killed, and, you know, say another nine or 10 injured, is that not a mass shooting? That happens a lot, too. If we were to add in those types of cases, we would be talking about hundreds more cases than we do. The set that we have from the last 30 years is now over 70 mass shootings around the country, and it’s in more than 40 states.

AMY GOODMAN: So, Mark Follman, the Harvard research shows that mass shootings has tripled since 2011. Your report, “The True Cost of Gun Violence,” very important, as you keep this database. What needs to be done at this point? President Obama, what was this? The 15th time he stood up before the American people to address the issue of a mass killing.

MARK FOLLMAN: It’s remarkable, isn’t it, to see him again and again on television saying essentially the same thing? You know, what can be done about it? It’s a very complex question. There are a lot of factors that play into this. But, of course, there is a very simple common denominator to all of it, which is powerful firearms that are easily accessible to the people that are carrying this out.

It’s interesting. You can look at the data and see some very strong patterns in terms of the type of person that does this. It’s overwhelmingly white male, twenties or thirties. The types of weapons they use are very similar—semi-automatic handguns and AR-15 semi-automatic rifles. So, you know, we can see these kinds of things about this crime, and yet there is really no way to profile for this and to predict when it’s going to happen. So, I think, you know, the people I’ve been talking to in public health and in law enforcement are increasingly in agreement that this really is putting more pressure on the community to help watch for this problem and help intervene and try to deal with the people that are carrying out these kinds of attacks.

MARK FOLLMAN: Legislation is another question, right? I mean, we know the gun politics in this country are extremely intense, extremely polarized. It kind of—you know, it boggles the mind that this can keep happening over and over, and the conversation about gun control or gun regulations doesn’t really seem to change. We hear the same arguments from both sides, and particularly from the Second Amendment people who are—you know, won’t have any thought of changing the regulatory system, which we know is flawed at best, to put it charitably.

AMY GOODMAN: Mark Follman, we’ll have to leave it there. We thank you for being with us, national affairs editor at Mother Jones, runs Mother Jones’ coverage of gun violence, including their mass shootings database, which we will link to. 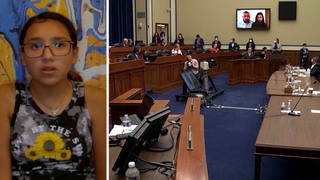