Britain has announced plans to challenge Ecuador’s decision to provide asylum to WikiLeaks founder Julian Assange in its London embassy, saying the $18 million price tag for policing the Ecuadorean Embassy during Assange’s residency is “unacceptable” to the British taxpayer. In response, Ecuador’s Foreign Ministry released a statement saying it is saddened Assange’s confinement has lasted so long, adding that its government had offered “31 times” to facilitate an “open judicial process” in Sweden. This comes just a day after Swedish prosecutors dropped part of their sexual assault inquiry against Assange, but the most serious part of the probe remains in place even though he has never been formally charged. Assange has been holed up in the Ecuadorean Embassy in London for three years, where he’s received political asylum. He fears he will be extradited to the United States to face prosecution for his role at WikiLeaks if he leaves the embassy. We are joined by Carey Shenkman, a First Amendment and human rights lawyer. He, along with Michael Ratner and the Center for Constitutional Rights, is representing WikiLeaks founder Julian Assange.

JUAN GONZÁLEZ: Britain has announced plans to challenge Ecuador’s decision to provide asylum to WikiLeaks founder Julian Assange in its London embassy. On Thursday, Hugo Swire of the British Foreign Office said in a statement, quote, “Ecuador must recognize that its decision to harbor Mr. Assange more than three years ago has prevented the proper course of justice.” Swire also said the $18 million price tag for policing the Ecuadorean Embassy during Assange’s residency is, quote, “unacceptable” to the British taxpayers. In response, Ecuador’s Foreign Ministry released a statement saying it is saddened Assange’s confinement has lasted so long, adding that its government had offered “31 times” to facilitate an “open judicial process” in Sweden. The statement noted, quote, that Ecuador “deplores the continued inaction of British and Swedish authorities over almost 1,000 days.”

AMY GOODMAN: This comes just a day after Swedish prosecutors dropped part of the sexual assault inquiry against Assange, but the most serious part of the probe remains in place even though he has never been formally charged. The announcement was made as the statute of limitations ran out on three parts of the investigation. On Thursday, Julian Assange’s Swedish attorney, Thomas Olsson, welcomed the news but criticized how the prosecutors have handled the case.

THOMAS OLSSON: [translated] The decision was expected, since the statute of limitation has run out. But, of course, it’s deeply regrettable that it has come this far, and it raises a whole lot of questions about how the prosecution has dealt with the case. … The reason we’re in this situation is that the prosecutors haven’t, for several years, accepted Julian Assange’s offer to be interviewed at the embassy, and no reasonable reason has been given for their position. According to the defense, this preliminary investigation should have been closed, in all its parts, a long time ago, and we’re convinced this would have been the case if the prosecutors would have carried out the interrogation and heard Julian Assange’s version.

AMY GOODMAN: Julian Assange has been holed up in the Ecuadorean Embassy in London for more than three years, where he has received political asylum. He fears, though, if he were to return to Sweden for questioning, that he would be extradited to the United States to face prosecution for his role as WikiLeaks founder, if he leaves the Ecuadorean Embassy. Both Ecuador and Sweden accuse the other of delaying a possible Swedish police interview with Assange inside the embassy. Sweden has never charged him with any crime.

For more, we’re joined now by Carey Shenkman, First Amendment and human rights lawyer who, along with Michael Ratner and the Center for Constitutional Rights, is representing WikiLeaks founder Julian Assange

Carey, can you explain the latest? First, that a number of the—you can’t say charges against Assange have been dropped—

AMY GOODMAN: But that these charges—that the allegations have expired.

CAREY SHENKMAN: That’s right. So, I want to take a little step back, because I think, doing a lot of these interviews—and it’s always tough for us on the legal team to communicate this case because, just as you pointed out, Amy and Juan, it’s so complicated. You have Sweden. You have the U.K. You have Ecuador. You have the United States. You have Assange, who’s been in an embassy for over three years. This situation is completely unprecedented. But I think, actually, this case is very simple. And the reason it’s simple is because Assange has been offering a simple solution for nearly five years. And that is, one, question him. He has been saying for years to the Swedish prosecutor, while in Sweden and then upon going to the U.K., joined now by Swedish courts, U.K., Ecuador, to come question him. So that’s one. Two—

AMY GOODMAN: And these are around issues of allegations of sexual assault. In the case of the allegations of one woman—there were two women—one has been dropped entirely now?

CAREY SHENKMAN: He hasn’t been charged. So, like I said, first, he has been asking to be questioned, and the prosecutor has firmly refused to do so. And second, he has been asking for a simple promise from the U.K. and Sweden: to promise not to extradite him to the United States, where he faces the most unprecedented attempt to prosecute him in U.S. history under the Espionage Act.

Now, yesterday the United Kingdom made a statement criticizing Ecuador, basically blaming them for the situation, which was completely outrageous, because Ecuador has every right to give Assange asylum. The institution of asylum is as old as civilization itself. And the U.K. and Sweden both, in fact, recognize diplomatic asylum, when it benefits them. There’s precedent for this. So it’s outrageous for them to say that they don’t recognize his asylum.

JUAN GONZÁLEZ: But what are the implications now for his possible freedom in the future, in terms of this last remaining allegation that still must have a run of its statute of limitations?

CAREY SHENKMAN: Right. Well, our position is—all along has been that this allegation needs to be dropped, once and for all. And it was positive that three of the four dropped yesterday, but that wasn’t because of anything the prosecutor did. It was because the prosecutor was literally forced to. And that’s been the trend in this case. Every bit of progress has been the prosecutor being forced either by a court, now by a time limit. But the Swedish courts were criticizing the prosecutor—that was nine months ago. They were asking, “What are you doing with this case? What are you doing with this case?” That’s when there were four allegations. And now there’s just one.

Ultimately, this case is about the United States. And like I said, there is an active and ongoing national security prosecution against Assange and WikiLeaks on account of publication of classified material since 2010. This was confirmed just in March by a U.S. federal court. And it’s been widely criticized by free speech and human rights organizations. Actually, just this last year, over 50 organizations criticized the Justice Department for continuing the investigation, because it threatens the very freedom of the press. So going after WikiLeaks would set a precedent that would have devastating effects on the newsgathering process and First Amendment freedoms. 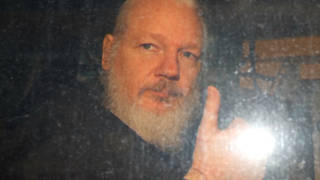