We turn now to Guatemala, where President Otto Pérez Molina is attempting to hold onto his office despite growing calls demanding for his resignation. The president has faced months of massive protests amid a multimillion-dollar corruption scandal in which importers paid bribes to Tax Authority officials to obtain discounts. Over the weekend, most of Pérez Molina’s Cabinet stepped down. The scandal has also led to the arrest of top officials, including Vice President Roxana Baldetti, who was arrested on Friday on corruption charges. On Saturday, crowds rallied outside the presidential palace chanting “Resign now!” and waving Guatemalan flags. On Sunday, the Roman Catholic Church joined in calling for the president’s resignation. Hours later, Otto Pérez Molina announced he would not resign. We go to Guatemala to speak with journalist and activist Allan Nairn about the current corruption scandal and Pérez Molina’s history as a U.S.-backed general implicated in the mass murder of indigenous Mayans during the country’s dirty war in the 1980s.

AMY GOODMAN: We turn to Guatemala, where the president, Otto Pérez Molina, is attempting to hold onto his office despite growing calls demanding his resignation. The president has faced months of massive protests amidst a multimillion-dollar corruption scandal in which importers paid bribes to Tax Authority officials to obtain discounts. Over the weekend, President Pérez Molina’s Cabinet stepped down. The scandal has also led to the arrest of top officials including the former vice president, Roxana Baldetti, who was arrested Friday on corruption charges. On Saturday, crowds rallied outside the presidential palace chanting “Resign now!” and waving Guatemalan flags. On Sunday, the Roman Catholic Church joined in calling for the president’s resignation. Hours later, President Otto Pérez Molina announced he would not resign.

PRESIDENT OTTO PÉREZ MOLINA: [translated] I declare categorically that I reject any link to the scandal or having received money from that money-defrauding operation. My conscience, in that sense, is at peace. I will show my face and show before the institutions, that by law is required, through the necessary process, that I have not been a part, and even less a receptor, of those ill-gotten funds against the Guatemalan people.

AMY GOODMAN: We go now to Guatemala to speak with journalist Allan Nairn.

Allan, welcome back to Democracy Now! Can you tell us what’s taking place in Guatemala right now?

ALLAN NAIRN: Well, there’s a popular uprising that may bring down the president, General Pérez Molina. It’s based on corruption, but Pérez Molina was also involved in mass murder during the 1980s, when he was the field commander in the Ixil zone for the Ríos Montt program of slaughter against the indigenous Mayan population. Pérez Molina was also on the payroll of the CIA when he served as chief of intelligence for the G2. The program of massacre by Ríos Montt was backed by the United States, by the Reagan administration. They got arms from the U.S. They got arms from Israel with U.S. help. Reagan said that that government was getting a bum rap on human rights. And this is as they were sweeping through the mountains decapitating, raping, slicing open pregnant women with their machetes, executing whole villages at point-blank range. They were the ISIS of their day. And now, one of the field commanders for that slaughter is the president, and there’s a chance he could be brought down, but on other grounds.

Ríos Montt, who was the dictator at the time, was brought to trial by a Guatemalan court as a result of popular pressure and some brave prosecutors and judges. He was convicted of genocide. He was sentenced to 80 years. The oligarchy demanded that that sentence be set aside. But tomorrow, Ríos Montt’s trial is due to resume. He’s trying to dodge accountability, claiming health problems. It’s a moment where the entire system of Guatemala is shaking. And in some senses, Guatemala is leading the world. They’ve achieved a level of civilization far higher than that of the U.S. It’s inconceivable that the U.S. could bring an American president to trial in an American court for mass murder of civilians. But Guatemala has done that. And now the people who are in the streets demonstrating are trying to take it farther by bringing down a sitting president.

AMY GOODMAN: Allan, for our radio listeners, I wanted to describe, and TV listeners—viewers, as well, we were showing images of you speaking to—well, it’s turned out that it is the current Guatemalan president, Otto Pérez Molina. But it was what? How many years ago? And where were you?

ALLAN NAIRN: That was September of 1982 in the Ixil triangle in the mountains of Guatemala, one of the many zones where the population is indigenous Mayan. In that video, that’s for a film that I worked on with Mikael Wahlforss and Jean-Marie Simon. And Pérez Molina at that time was using an alias. I didn’t know Pérez Molina was his name. He was calling himself “Mayor Tito,” Major Tito. And he told me that all the families here are with the guerrilla. His men, those below him, described in detail how they would go into villages, strangle civilians, execute them on the spot, return and bomb their villages, chase fleeing people into the hills and kill them. And then, some of the people who we were able to speak to on the side, some of the survivors who had been placed in army concentration camps, they verified these accounts by the soldiers. And that man, Pérez Molina, later rose to become chief of intelligence, on the payroll of the CIA, and now is president of Guatemala.

THELMA ALDANA: [translated] The documentation seized in the raids, together with the available telephone interception, leads us to consider as probable that the president of the republic had participated in a commission with the same punishable conduct by those who have been accused of being part of the criminal organization, La Línea.

AMY GOODMAN: So, the Guatemalan attorney general, Thelma Aldana, is implicating the president. He held a—he spoke on national television last night, said he won’t go. Allan, you have 10 seconds. What is going to happen now, do you believe?

ALLAN NAIRN: The U.S. is trying to prop up Pérez Molina. They told him not to resign, and he’s refusing to resign. But it’s unclear what’s going to happen. People are in the streets. A new election is scheduled for September 6th. People are calling for a postponement. They’re calling—

AMY GOODMAN: We just lost Allan, but that’s the end of the show. Allan Nairn, journalist, speaking to us from Guatemala City, Guatemala. And we’ll keep you updated on what happens there. 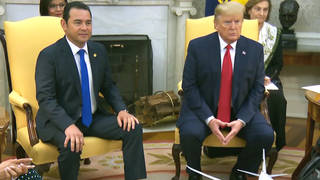