As members of Congress continue to debate the historic Iran nuclear deal ahead of next month’s vote, more attention is being paid to the three—possibly four—Americans imprisoned in Iran: Washington Post reporter Jason Rezaian, Saeed Abedini, Amir Hekmati and Robert Levinson, whose whereabouts are in question. During a recent press conference, President Obama defended his decision not to tie the nuclear negotiations to the release of the hostages, saying it would have encouraged Iran to use hostages perhaps to get additional concessions from the United States. We speak to Sarah Shourd, one of the three American hikers imprisoned in Iran for more than a year in solitary confinement. She was captured, along with her two companions, Shane Bauer and Joshua Fattal, in July 2009 while hiking near the unmarked Iran-Iraq border in semi-autonomous Iraqi Kurdistan during a week-long trip from her home in Damascus, Syria.

AMY GOODMAN: This is Democracy Now!, democracynow.org, The War and Peace Report. I’m Amy Goodman. As members of Congress continue to debate the historic Iran nuclear deal ahead of next month’s vote, more attention is being paid to the three, possibly four, Americans imprisoned in Iran: Washington Post reporter Jason Rezaian, Saeed Abedini, Amir Hekmati and Robert Levinson, whose whereabouts are in question. President Obama was recently questioned by CBS reporter Major Garrett about the imprisoned Americans.

MAJOR GARRETT: As you well know, there are four Americans in Iran, three held on trumped-up charges, according to your administration, one whereabouts unknown. Can you tell the country, sir, why you are content, with all the fanfare around this deal, to leave the conscience of this nation and the strength of this nation unaccounted for in relation to these four Americans?

PRESIDENT BARACK OBAMA: I’ve got to give you credit, Major, for how you craft those questions. The notion that I am content as I celebrate with American citizens languishing in Iranian jails? Major, that’s nonsense. And you should know better. I’ve met with the families of some of those folks. Nobody is content. And our diplomats and our teams are working diligently to try to get them out.

AMY GOODMAN: President Obama went on to say he did not tie these negotiations to the release of the hostages because essentially it would encourage Iran to use hostages to perhaps get additional concessions from the U.S.

Sarah, welcome back to Democracy Now! It’s great to have you with us. First, comment on the Iran nuclear deal. Are you for it or against it?

SARAH SHOURD: I think it’s a great deal. I think it’s more than we could have ever hoped for. Not only does it weaken the hardliner position in Iran and ease tension between our two countries, it could lead to cooperation to combat ISIS. I also think that it is good for the Americans that are currently detained there. I think it actually gives the Iranian government less incentive to use hostage taking as a tactic.

AMY GOODMAN: So, I want to go back to the Iran nuclear deal—

AMY GOODMAN: —because those who are opposed to it, Democrats and Republicans, say you can’t trust Iran. Now, certainly, you are evidence of this. You were imprisoned by Iran.

AMY GOODMAN: You were held in solitary confinement for more than a year. Do you trust them?

SARAH SHOURD: Well, I mean, there’s been a lot of distrust on both sides for a very long time. We’ve been locked in this relationship of animosity that’s gone nowhere, that’s benefited no one. I think that I trust this deal because I think it’s a good deal for both sides, and I think that anything other than this deal will inevitably lead to war, which is a terrifying prospect.

AMY GOODMAN: So, I want to ask you about why you feel that those Americans who are imprisoned in Iran have more of a shot at release if this deal is signed. It’s certainly not what others are saying. They’re saying it’s a sign of John Kerry and Obama’s weakness that they could not include the hostage release in this deal.

SARAH SHOURD: Right. Well, because of the diplomats that I worked with—I was released after a year being held as a political hostage, and my husband, Shane Bauer, and my friend, Josh Fattal, were there for another year. And I was right in the center of negotiations for their release between the U.S. government; the Omani government, which negotiated my release and eventually also brought Shane and Josh home; the Venezuelan government was involved; the Iraqi government. These diplomats convinced me that although it’s ridiculous to say that these political hostages are not tied to larger issues such as the nuclear deal, because that’s why they’re being held in the first place. They’re collateral. They’re like money in the bank for the Iranian government that they’re going use to assert pressure on whatever issues that are important to them that involve the United States.

AMY GOODMAN: Explain back when you—before you were released, how deals, you feel, led to your release, deals that you were not included in.

SARAH SHOURD: Sure, yeah. Well, I was sitting in my cell in 2010 when—I had a small television that was all Iranian state-run news, but the ticker at the bottom was in English, and that’s how I got the only information I had from the outside world. And I learned about the Tehran declaration, when Turkey and Brazil came up with an amazing deal that would have—that would have, you know, gone very far to solve the nuclear issue with Iran. There was all kinds of excitement. I was dancing and laughing in my cell, because I had no doubt in my mind that my release and Shane and Josh’s release would be carefully calibrated with the temperature of U.S.-Iranian relations. So, if the temperature is good, it looks better for the hostages. That deal was shot down by the U.S. government the very next day, and another round of sanctions were put on the Iranian government, which made me—made it quite clear to me that I was going to be in there for at least a while longer, if not a very long time.

So, I think that probably—I know that, from my experience inside, word travels fast inside Evin Prison, that, whether they have televisions or not, there’s whispers down the hall. There are the guards that are sympathetic. Most likely, Jason Rezaian, Saeed and Amir have heard about this deal, and they’re feeling very hopeful, but also very worried that it’s not going to go through.

AMY GOODMAN: Explain who these four men are.

SARAH SHOURD: Saeed Abedini is a Christian pastor. None of them have done anything wrong. There’s been absolutely no evidence shown against them—I mean anything, you know, that has been in any way demonstrated by the Iranian government. Jason Rezaian works for The Washington Post, and he’s Iranian-American, and he was working in the country. All of them have been subjected to very long periods of solitary confinement, as I was. And Jason just had a trial, and his family is awaiting the results. Yeah, all of these people, by all accounts, are just being used as pawns.

AMY GOODMAN: And the other two men?

SARAH SHOURD: Amir Hekmati was actually picked up just weeks after Shane and Josh were released, which made it a very sort of clear revolving door. He’s also a U.S. citizen. And like I said, if there’s any evidence against these people, the Iranian government would have shown it a long time ago, just as they never showed any evidence against us.

AMY GOODMAN: And the final man?

SARAH SHOURD: Yes, Levinson has been missing. He disappeared while he was visiting the Kish islands. And for a long time it’s been suspected that the Iranian government knows where he is. And—but he’s really just been completely missing. No one knows anything. There was a video released by his captors a few years ago.

“Opening the Box”: After Being Jailed in Iran, Sarah Shourd Examines Solitary Confinement in U.S.

NEXT“Opening the Box”: After Being Jailed in Iran, Sarah Shourd Examines Solitary Confinement in U.S. 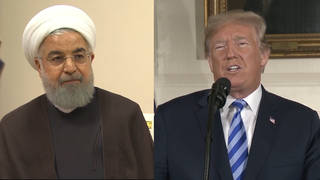 Former Iranian Ambassador: Trump’s Reimposed Sanctions Against Iran Are an Act of Warfare