Ten years ago this week, Hurricane Katrina struck the Gulf Coast, killing more than 1,800 people. David Simon’s series “Treme” looked at New Orleans after the storm. We talk to the acclaimed TV writer and producer about the show and his love of New Orleans.

AMY GOODMAN: “Indian Red” from the HBO series Treme. This is Democracy Now!, democracynow.org, The War and Peace Report. I’m Amy Goodman. We’re spending the hour with David Simon, the acclaimed television writer, producer. Ten years ago this week, Hurricane Katrina struck the Gulf Coast, killing more than 1,800 people. David Simon’s series Treme looked at New Orleans after the storm. This is actor John Goodman playing the character Creighton Bernette, being interviewed by a British television reporter after the storm.

CREIGHTON BERNETTE: [played by John Goodman] What hit the Mississippi Gulf Coast was a natural disaster, a hurricane, pure and simple. The flooding of New Orleans was a man-made catastrophe, a federal [bleep]-up of epic proportions and decades in the making.

REPORTER: We can edit that out. No worries.

CREIGHTON BERNETTE: The levees were not blown, not in '65 and not three months ago. The flood protection system built by the Army Corps of Engineers, aka the federal government, failed. And we've been saying for the last 40 years, since Betsy, that it was going to fail again unless something was done. And guess what. It was not.

CREIGHTON BERNETTE: No worries, sweetheart. Cool as a cucumber up an archbishop’s [bleep]. The levees weren’t blown. The floodgates failed, the canal walls failed, the pumps failed, all of which were supposedly built to withstand a much greater storm.

REPORTER: Are you suggesting criminal liability.

CREIGHTON BERNETTE: Absolutely. Find the responsible parties, and put them on trial—Corps of Engineers, federal, state, local government, the contractors who used substandard materials, and the goddamn sleazebag politicians that they have in their pocket.

AMY GOODMAN: That’s a clip from Treme, and that was John Goodman playing the character, Creighton Bernette, being interviewed by a British television reporter after the storm. That’s right, Hurricane Katrina, 10 years ago this week. Your thoughts on where New Orleans is today and what you were doing with Treme?

DAVID SIMON: Oh, I think probably people from New Orleans would be better equipped to give you an assessment of the city in detail. We did Treme because we—I was sort of surprised after The Wire. There were a lot of people who watched The Wire and came to the sort of, I thought, myopic conclusion that we were arguing against the city or against good governance in a city or the idea of the city as the American future. There was a lot of: “Wow! Baltimore is messed up. Why don’t they move?” And, of course, I live in Baltimore. And move to where? You know, this is our future, and we either solve this or we don’t. And so, I was really a little bit astonished at some of the—sort of the neoliberal, libertarian juvenilia that greeted that storytelling, and I wanted to make an argument for the city.

So here was this place that had been one of America’s culturally iconic places, a source of great cultural power in American life—and, in fact, in terms of the world—that had been 80 percent destroyed, and now had to come back. And Eric Overmyer, who lives down there, and I’ve spent a lot of time down there, we decided to sort of attend to what actually happened after the storm and what seemed to be bringing New Orleans back and what seemed to be working and what seemed not to be working. And so we tried to take careful notes, and we tried to follow the actual narrative of what was—you know, what the arguments were and what the struggles were in New Orleans, and we tried to make a show around that.

But really, it was an argument for the city. It was saying, you know, “Look at—look at what’s possible.” And certainly, the city is a compacted, multicultural experience, because that aspect of American urbanity has given the world maybe the greatest gifts we have to offer—you know, jazz, jazz music. I mean, African-American music comes from about 10 square blocks in New Orleans. And if we were wiped off the face of the Earth right now and there was nothing left of us but what’s on jukeboxes everywhere, from Johannesburg to Timbuktu or, you know, Kuala Lumpur—I mean, everywhere you go—wherever you go, there’s American music on the juke or in the bar or in the shebeen. And that’s New Orleans. That’s the legacy of New Orleans, and it’s one of our great gifts. And it can only happen in a place that is decidedly American, that has the crosscurrents of European, African, Caribbean culture. It could only happen here. So, it was really—it’s probably the most patriotic piece I’ll ever do, is Treme.

AMY GOODMAN: Well, like The Wire, you’re dealing with New Orleans from every different angle. After Hurricane Katrina, five police officers were accused of shooting and killing two unarmed people and wounding four others on the Danziger Bridge. The officers were convicted in 2011, but the convictions were later vacated. Earlier this month, a federal appeals court ruled the officers are entitled to a new trial. Now, you address the Danziger Bridge in Treme.

LT. TERRY COLSON: [played by David Morse] Headquarters’ rumor mill has the grand jury going after him and the others, like he’s lying about Danziger.

SGT. PERCY BECHET: Pshhh. Yeah, Eddie Jordan’s on the hunt, ain’t he? Can’t bring a damn murder case to court, but this Danziger mess, he’s right up our [bleep]. Huh, it’s either him or a runaway grand jury.

LT. TERRY COLSON: For Christ’s sakes, I was right there when the shoot-to-kill-looters order came down to district commanders. “If you can sleep on it, you can do it.” That’s what they told us. I know they put that out there, even if they won’t admit it now. It was a bad shoot, but why lie? All those guys have to do is tell the grand jury, “We received that order,” and they followed that order. Anything that happened after that, it might be bad police work, but it ain’t illegal. The storm was a mess, you know? And I don’t doubt that some bad [bleep] happened. But was there bad intent? We can’t look back. We need to deal with the here and now.

AMY GOODMAN: A clip from Treme. You said loosely based on Danziger Bridge incident.

DAVID SIMON: Yeah, I think we reference to Danziger in dialogue, because that prosecution was ongoing. But actually, for most of—the way we dealt with that was to do a—we did a fictional shooting that was basically comprised of details from about five or six different police shootings, either in the immediate aftermath of Katrina—you know, there was a lot of great ProPublica reporting on what happened in Algiers, in one of the deaths there. And clearly, the police department, under great stress during the storm, was involved in any number of civil rights violations. But to be—

AMY GOODMAN: I mean, in Algiers, we were there, and there was a dead body laying in the street, which we filmed. We tried to get every level of authority to come over. I mean, we were right there, and they were passing us on the street.

DAVID SIMON: Well, they had a shooting of somebody in Algiers that, of course, became—they wouldn’t investigate their own shooting. I mean, you know, the ProPublica reporting was some of the most astonishing stuff. But you’re really dealing with a police department that has a long history of civil rights violations. I mean, I covered a police department in Baltimore that certainly has its problems, and I covered it for about 15 years. You know, I have to say, the NOPD, as I encountered it, there was not a professional ethos. In the years running up to Katrina, they had a fundamental problem with civil rights issues, a fundamental problem with execution and criminal prosecution. And Katrina hit a very vulnerable police agency that I think, in some respects, cracked during the storm and was not—was ill-prepared to be under the great stress of the storm. I think it was quite traumatic.

And then afterwards, there was a real reluctance on the part of not just the state and local people to investigate—actually, I think the state—the Louisiana state police actually did a pretty good investigation of some of the stuff in Algiers. They pointed the fingers at some people in the command staff in a notable report. But the federal government didn’t really get involved in looking at the civil rights stuff until the change of administration. They were really kind of hamstrung until the Obama administration came in. And all of a sudden, Jim Letten, who had been chasing old Morial people—that was his chief prosecution—suddenly got interested, under a Democratic administration, in civil rights issues and started looking at some of these shootings. But it was quite belated. It was quite belated.

AMY GOODMAN: We’re going to go to break; when we come back, talk about The Wire, also your meeting with President Obama at the White House and more, even get into maybe some presidential politics, because one of the candidates—

AMY GOODMAN: —is from your city—

AMY GOODMAN: This is Democracy Now! We’re talking to the journalist, the television writer, best known for creating the HBO series The Wire and Treme, now has a new one out, Show Me a Hero, a longtime reporter at The Baltimore Sun. David Simon is with us. Stay with us.

The Drug War Has to End: David Simon on “The Wire” & Over-Policing of the Poor

NEXTThe Drug War Has to End: David Simon on “The Wire” & Over-Policing of the Poor 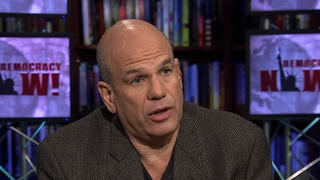