“Our Climate, Our Future”: As Obama Visits Arctic, Alaskans Urge Him to Reverse Shell Oil Deal

Weeks after approving Shell’s plans to drill in Alaska, President Obama is heading to the state to warn about the dangers of climate change. “Alaska’s glaciers are melting faster, too, threatening tourism and adding to rising seas,” Obama said in his weekly address. A protest is scheduled today in Anchorage to urge Obama to reverse his decision on Shell and stop all exploratory drilling in the Arctic. We speak to Richard Steiner, an Alaskan marine conservation biologist, who is speaking at the “Our Climate, Our Future” rally.

AMY GOODMAN: President Obama arrives in Alaska today, where he’s becoming the first sitting U.S. president to visit Arctic Alaska. He talked about his trip during his weekly address.

PRESIDENT BARACK OBAMA: I’ll have several opportunities to meet with everyday Alaskans about what’s going on in their lives. I’ll travel throughout the state, meet with Alaskans who live above the Arctic Circle, with Alaska Natives and with folks who earn their livelihoods through fishing and tourism. And I expect to learn a lot.

One thing I’ve learned so far is that a lot of these conversations begin with climate change. And that’s because Alaskans are already living with its effects—more frequent and extensive wildfires; bigger storm surges as sea ice melts faster; some of the swiftest shoreline erosion in the world, in some places more than three feet a year. Alaska’s glaciers are melting faster, too, threatening tourism and adding to rising seas. And if we do nothing, Alaskan temperatures are projected to rise between six and 12 degrees by the end of the century, changing all sorts of industries forever.

AMY GOODMAN: On Wednesday, President Obama will deliver a speech at the Conference on Global Leadership in the Arctic: Cooperation, Innovation, Engagement and Resilience, or GLACIER, to address the crucial climate challenges in the Arctic. Obama’s visit to the Arctic comes on the heels of his administration’s decision to approve Shell’s plans to begin oil extraction off the Alaskan coast this summer, despite protest from environmental groups.

Also, ahead of the trip, President Obama announced the name of North America’s tallest mountain peak will be changed from Mount McKinley back to Denali, its traditional Alaska Native name. Ohio’s congressional delegation had fought to defend the name McKinley, which honors former President William McKinley, who was from Ohio. But Alaska Natives have long viewed the name as imperialist.

Well, for more, we go to Anchorage, where we’re joined by Rick Steiner via Democracy Now! video stream, a marine conservation biologist, former professor at the University of Alaska. Today, Dr. Steiner will speak at the “Our Climate, Our Future” rally convened by a coalition of Alaskan grassroots groups ahead of President Obama’s speech. He’s involved in the emergency response to the 1989 Exxon Valdez spill and proposed the court settlement and major thrust of the restoration program for habitat protection. He has now started a petition called “Tell President Obama to designate Marine National Monuments in Alaska,” which just surpassed 100,000 signers.

Rick Steiner, welcome back to Democracy Now! Talk about what you’ll be saying in your speech today and why you’re protesting President Obama, who’s the first sitting president to come to the Alaskan Arctic to address the issue of climate change.

RICK STEINER: Well, thanks, Amy. It’s good to be back. And yeah, I think President Obama has been good on climate. He’s probably been the best president in the history of the nation on climate change. But the problem is, he hasn’t been good enough. The commitments that he has made are not enough to turn the tide on climate change. We’re on a sinking boat, and it’s like we’re taking on two gallons of water—excuse me—every minute, and we’re bailing one gallon. So, it’s a recognition that they’ve made that there’s a serious problem here, but it’s not enough to fix the problem. This is an enormous threat in Alaska. We’re living it daily. We’re in crisis. And we need to have a response that’s commensurate with the crisis.

AMY GOODMAN: So, explain what Alaskan—what drilling off the Alaskan coast will mean—all of the environmentalists, the “kayaktivists,” the people who hung from the bridges to try to prevent Shell from moving its rigs to Alaska to drill, to the Arctic.

RICK STEINER: Well, in a real sense, we think it’s somewhat—it seems somewhat hypocritical to, on the one hand, say we’re concerned about climate change, and the scientific community is very clear that we need to be leaving maybe two-thirds of the hydrocarbon reserves, the oil and gas and coal around the world, right where it is right now, in the ground and in the seabed, in order to be able to stabilize global climate in the future. The best place to start doing that, in our view, is this new frontier of the Arctic, in which there’s something like 100 billion tons of carbon. Now, to the climate, it probably doesn’t matter if the ton of carbon comes from the Middle East or the Gulf of Mexico or Africa or the Arctic, but the optics of this are very worrying. It shows us that if we’re going to go ahead and drill for oil offshore in the Arctic Ocean, impose this industrialization and disturbance and this huge spill risk to this extraordinary ecosystem—it shows us that we may not be really serious enough, with enough resolve, to actually want to leave carbon in the ground and in the seabed, which is what we know we need to do. So it’s worrisome to many people who are concerned about climate.

AMY GOODMAN: Rick Steiner, you ultimately resigned from the University of Alaska around your views and scholarship on environmental protection. Can you talk about what happened, and talk more broadly about the power of the oil industry?

RICK STEINER: Well, the oil industry is God in Alaska. That’s the way it’s viewed by many politicians. It’s responsible—oil revenues run the state of Alaska budget. It constitutes something like 80 or 90 percent of Alaska’s state revenues. It’s a big deal in Alaska. And it has this political momentum around it. So all the institutions—the university is extraordinarily pro-oil, and so are the state agencies and even the federal agencies here. And I’ve seen that all over the world, where a large oil industry develops—in Africa, in the Middle East, in Southeast Asia—and has this peculiar political momentum.

In Alaska, the university did not want me seeking and teaching my truth publicly, that there were concerns and risks about offshore drilling in Alaska. And they didn’t want me saying that. I argued that I had the—not just the right, but the responsibility, to seek and teach that truth. That was part of my—the work I was doing on behalf of the university. I complained about the risks of one particular offshore drilling project in Bristol Bay, and the university terminated my federal funding because of that. I argued with them, and then I ultimately said the heck with it, and I resigned on principle, that I was not going to pretend to work for an institution that pretended to honor academic freedom and, in the end, actually didn’t. So I resigned. The problem is, is the university still—I mean, everybody else has this very clear message right now that thou shalt not criticize oil in Alaska, or else your position is at risk.

AMY GOODMAN: In the last minute we have together, we are leading up to the U.N. climate summit in Paris.

AMY GOODMAN: What do you think needs to happen?

RICK STEINER: Well, certainly, the U.S. needs to double down on the commitments that President Obama has made so far. The U.S. declared commitment is something like 28 to 30 percent reduction in carbon emissions by 2030. That’s good, but about half of what we need at Paris. The big deal, as well, is, the U.S. agreement with China last year allows China to continue increasing their carbon emissions until 2030—for the next 15 years. And conceivably, China could then double their carbon emissions by the time that this agreement requires them to cap their emissions and begin reducing it. When President Obama meets with President Xi Jinping next month in Washington, they should revisit that deal and get China to commit to earlier and more substantial greenhouse gas reductions. And that—you know, Paris is the make-or-break game. Either we get this strong, urgent, legally binding deal in Paris, or I think we’re kind of sunk. So, Paris is a make-or-break deal.

AMY GOODMAN: Rick Steiner, I want to thank you for being with us, marine conservation biologist, former professor at University of Alaska. Today he will be speaking at the “Our Climate, Our Future” rally ahead of President Obama’s speech. He’s started a petition that has now more than 100,000 signatures, “Tell President Obama to designate Marine National Monuments in Alaska.” This is Democracy Now!, democracynow.org, The War and Peace Report.

As Al Jazeera Journalists Are Jailed for 3 Years in Egypt, Will U.S. Stop “Cozying Up” to Regime?

NEXTAs Al Jazeera Journalists Are Jailed for 3 Years in Egypt, Will U.S. Stop “Cozying Up” to Regime? 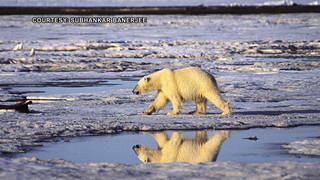