James Risen: In Sharp Break from Past, APA Set to Vote on Barring Psychologists from Interrogations

We speak with Pulitzer Prize-winning New York Times reporter James Risen, who has extensively reported on the APA’s ties to the CIA and Pentagon’s torture program and is in Toronto to cover the American Psychological Association’s annual meeting. He talks about the significance of today’s scheduled vote by the APA’s Council of Representatives on barring psychologists from participating in interrogations. “It is a very sharp break from their past practices,” Risen notes. “It is in response to an investigation that found collusion between psychologists and the Bush administration on interrogations.”

AMY GOODMAN: Well, around 6:00 this morning, I spoke with the Pulitzer Prize-winning New York Times reporter James Risen, who has come to cover this meeting, as well. He has extensively reported on the APA’s ties to the CIA and Pentagon’s torture program, and he’s covering the meeting that’s taking place today. I asked him to talk about the significance of the APA meeting and today’s vote, that’s happening as we broadcast, by the APA’s Council of Representatives on barring psychologists from participating in CIA and military interrogations.

JAMES RISEN: Yeah, I think this is a very important meeting for the APA and for the psychological profession. It’s where they are going to vote today—or at least they are expected to vote today—on whether to allow—whether to prohibit psychologists, on ethical grounds, from remaining involved in any national security interrogations, including those that are now being conducted or are under the Obama administration, noncoercive interrogations. And so, it’s a very sharp break from their past practices, and it’s in response to, you know, an investigation that found collusion between psychologists and the Bush administration on interrogations.

JAMES RISEN: Right. I think, you know, there are some people who have opposed the proposed ban. I think there are some groups within the psychological profession who are more involved with government, either military or other agencies. And—

AMY GOODMAN: Like Division 19, the Society for Military Psychologists?

JAMES RISEN: Right, right. And some of those people believe that this goes too far, that it goes beyond just a break with the reported collusion in the Bush administration, and now, that they think that this is kind of impeding on their turf of involvement with the military. And so it will be interesting to see how far that debate goes, whether there are enough people who support this ban versus those who are—you know, believe that it goes too far.

AMY GOODMAN: You have written extensively about how U.S. psychologists involved in these interrogation programs shielded the torture program. Explain.

JAMES RISEN: Well, the Hoffman Report, which came out about a month ago, I guess, now, basically described the ways in which—very subtle and nuanced ways that both individual prominent psychologists and staff and officials from the American Psychological Association worked kind of behind the scenes over the years to make sure that, even as the APA said they were opposed to torture, that they created policies that made sure that psychologists could stay involved with the Bush-era interrogation programs by the CIA and by the Pentagon. And so, it was a really interesting report that kind of detailed the very subtle, backroom ways that the people involved would maneuver to kind of, at the same—at one point—at the same time that they’re saying they’re opposed to abusive tactics and interrogation that went—was too abusive, but actually making sure that they didn’t do anything to block psychologists from being involved. And so, I thought the Hoffman Report really captured the subtleties and nuances of how that happened really well.

AMY GOODMAN: And what else was most stunning to you about this report, that actually was commissioned by the American Psychological Association?

JAMES RISEN: Yeah, I thought, to me, what was interesting was that the APA board entered into this report. They hired David Hoffman, the Chicago lawyer, to do this report. At the time, they were saying, “You know, there are these accusations out there, but we don’t believe them, and so we’re going to have a—get a report.” And I don’t think that the board, when they hired Hoffman, expected to get such a damning and scathing report, because I’ve talked to members of the board since then, and they’ve said they were shocked by the findings of the Hoffman Report. And I think that is what is really driving this vote today, is how shocked the leadership of the APA is by the findings and how they now kind of have many of—many senior members of the APA, I think, have been kind of issuing mea culpas, saying that the critics who they had ignored for many years were right, and we now have to recognize that.

AMY GOODMAN: A lot of this came from your book in revealing emails that you got a hold of. Explain what you found, James Risen.

JAMES RISEN: Sure. Well, it was interesting. My book, Pay Any Price, came out last year. I had gotten the emails of a behavioral scientist named Scott Gerwehr. He was a very interesting character who died in 2008. He was a researcher at the RAND Corporation in Santa Monica and then later at a defense contractor. And he had—before he died, he had reached out to a human rights organization and a human rights investigator, Nathaniel Raymond at Physicians for Human Rights. And he seemed like he—from talking to Nathaniel, he and some other people, it seemed like he wanted to talk about what the CIA was doing, in terms of interrogations. It was never clear exactly what his role was to either Nathaniel or to anyone else, but he clearly knew things.

And so, after he died, I was able to gain access to his email archive going back many years. And it didn’t show that he had any kind of smoking-gun revelation about the Bush administration or the CIA interrogation program, but what it showed was that he had connections with all kinds of people in Washington, especially the intersection between the intelligence community and the psychological profession. And in particular, there were a lot of emails, in which he was copied, between people at the CIA and the American Psychological Association and the Defense Department and others. And it all showed these kind of—it kind of revealed that there had been some effort behind the scenes to kind of shape the nature of the APA’s policies on interrogation after Abu Ghraib and after the scandal broke, and that there was, you know, really a cooperation or coordination on their policy efforts in 2005 to deal with the interrogation program or policy, in which CIA, Pentagon and others were taking roles in how that was taking shape.

AMY GOODMAN: You’ve written in one of your latest reports in The New York Times about Obama administration officials saying that in interviews, that psychologists still play roles in the national security interrogations in terrorism cases.

JAMES RISEN: Right. Yeah, there’s the main interrogation program for high-value terrorism targets, is what they—I guess they call it the High-Value Detainee Interrogation Program, which is led by the FBI, but it also has people from the Defense Department and the CIA. That group actually deploys out when they capture somebody overseas, or they’re involved sometimes when someone, a high-value person, is arrested here. And it’s outside the normal, you know, kind of legal process of—in some cases, or the domestic criminal investigation, it can be outside that. And so, that’s considered a national security interrogation program.

There’s also psychologists at Guantánamo, and they still play roles in terms of—you know, what I was told was that at Guantánamo, if a detainee wants to talk with someone, that a psychologist will be involved. So, they are still involved, and in various ways, in the interrogation programs, and so it will be interesting if this passes. And if the new ethics guideline prohibits their involvement, you know, how the APA is going to deal with the Obama administration will be, I think, the really interesting issue. Will there be some effort by the Obama administration to deal with—to address this issue or not? So I don’t know.

AMY GOODMAN: And finally, this is the first American Psychological Association meeting, the largest association of psychologists in the world, that won’t have a certain group of leaders at its helm.

AMY GOODMAN: They’ve been forced out, like Stephen Behnke, the head of the ethics division. Can you talk about these high-level removals, firings, resignations?

JAMES RISEN: Yeah, I think that four top officials from the APA have left either through retirement or resignation or being forced out, including the chief executive and one of his deputies and the—as you said, Behnke, the ethics director. And so, it’s really interesting to see today, or this weekend, you know, how the membership responds to that. There had been some critics who say it hasn’t—the moves haven’t gone far enough.

AMY GOODMAN: There’s a call for the current president to be ousted or to leave.

AMY GOODMAN: Pulitzer Prize-winning New York Times reporter James Risen, author of Pay Any Price: Greed, Power, and Endless War. I interviewed him early this morning here in Toronto, Canada, ahead of the American Psychological Association’s vote on barring psychologists from participating in national security interrogations. The vote is expected to take place sometime today. This is Democracy Now!, democracynow.org, The War and Peace Report. In our third segment today, we’ll bring you excerpts of the Republican debate, but we’re going to go back to the dissident psychologists speaking out against torture. Stay with us.

Gitmo is a “Rights-Free Zone”: Dissident Psychologists Speak Out on APA Role in CIA-Pentagon Torture

NEXTGitmo is a “Rights-Free Zone”: Dissident Psychologists Speak Out on APA Role in CIA-Pentagon Torture 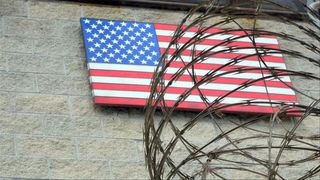