We turn now to an explosive new report that claims the U.S. government has secretly targeted Bolivian President Evo Morales with a drug sting code-named “Operation Naked King.” The report — just released by The Huffington Post this morning — draws on court documents filed by a longtime DEA confidential informant, Carlos Toro. It appears to confirm Morales’ long-standing suspicion that the U.S. Drug Enforcement Administration, or DEA, has sought to undermine Morales’ government. In 2008, Morales expelled the DEA from his country, accusing the agency of bribing police officers, violating human rights, covering up murders and destroying infrastructure. Morales then embarked on his own strategy of combating drug trafficking by working cooperatively with coca growers to diversify crops and promote alternative development. His government’s efforts were largely effective: The United Nations announced last month that the cultivation of coca leaf in Bolivia has fallen to a 13-year low. Despite that victory, the DEA announced this week plans to officially “decertify” Bolivia — a bureaucratic move that would cost Bolivia financial assistance, and amounts to an accusation by the DEA that Bolivia is not sufficiently cooperative in combating drug trafficking. We speak to Nick Wing of The Huffington Post and Kathryn Ledebur, director of Andean Information Network.

In 2008, Morales expelled the DEA from Bolivia, accusing the agency of bribing police officers, violating human rights, covering up murders and destroying infrastructure. Morales then embarked on his own strategy of combating drug trafficking by working cooperatively with coca growers to diversify crops and promote alternative development. His government’s efforts were largely effective: The United Nations announced last month the cultivation of coca leaf in Bolivia has fallen to a 13-year low. Despite that victory, the DEA announced this week plans to officially decertify Bolivia—a bureaucratic move that would cost Bolivia financial assistance, and amounts to an accusation by the DEA that Bolivia is not sufficiently cooperative in combating drug trafficking.

We welcome you both to Democracy Now! Nick Wing, lay out what you learned.

AMY GOODMAN: Now, the president himself, Evo Morales, is a former coca grower. Can you talk about what the U.S.’s motives are and what their relationship with Morales has been?

NICK WING: I would say—I mean, the answer to that question definitely depends on whom you ask. Morales, for a long time, has accused the DEA of really being an arm for sort of Western imperialism and colonialism and being in the country really to undermine his leadership and undermine his role and his role as someone who is trying to cut down the growth of coca in Bolivia. So, he would say that this is an effort—I’m guessing that he would say this is an effort to further undermine him and to try to link his administration to a cocaine-trafficking ring, which then they could use to say that not only is his—are his efforts to cut down production ineffective, but they’re also corrupt. Now, I’m guessing the DEA would say this is just an honest effort to take cocaine off of the global marketplace. But there would probably be a big disagreement there between the two of them.

AMY GOODMAN: In 2010, Democracy Now! broadcast from the World Peoples’ Conference on Climate Change in Cochabamba, Bolivia. We spoke to the Bolivian president, Evo Morales, for an hour about how the U.S. is combating drug trafficking. Listen carefully.

PRESIDENT EVO MORALES: [translated] And I continue to be convinced that cocaine and drug trafficking is an invention of the United States. And with that invention, they’ve been able to create this war against drug trafficking. Capitalism lives from war. Capitalism needs wars in order to sell its weaponry. So this is not an isolated drug issue. It goes to the very interests of capitalism. And on the pretext of fighting drugs, they establish military bases. It’s political control and domination that they want. It’s the new colonialism.

AMY GOODMAN: That’s President Morales speaking to Democracy Now! You can watch the whole hour at democracynow.org. But I wanted to bring in Kathryn Ledebur right there in Cochabamba, director of the Andean Information Network. Can you respond to learning that the DEA is targeting President Morales with this sting operation, even the name of this operation, Operation Naked King, Kathryn?

KATHRYN LEDEBUR: Well, I think the DEA is well known for bizarre operation names, and I think this is a very interesting revelation in many senses. One, there were a lot of Morales complaints and administration complaints about inappropriate activities of the DEA, of going beyond their mission, and levels of entrapment or political involvement, and that were really dismissed by U.S. officials at the time of the DEA expulsion. And what we see now is that there was a DEA operation in course, when in fact the DEA had absolutely no authorization to operate in the country. I think it’s an important time for us to all re-evaluate criticisms of the DEA—and there have been many, but specifically within Bolivia—and criticisms of U.S. drug policy, and look at these revelations and look at what really needs to be changed dramatically.

AMY GOODMAN: And what does it mean for the U.S. to go after Morales in this way? What will it mean in Bolivia?

KATHRYN LEDEBUR: Well, I think there’s going to be a great deal of frustration. I don’t think there’s going to be a lot of surprise. There were—there have been, in the international press, hints of this over the past five or six years. And so I don’t think anybody is going to be surprised. I don’t think this is going to do anything to improve bilateral relations. There have been a series of failed attempts to do so. But I really hope that this is a point in time where the U.S. can realize that there’s not oversight over the DEA and that U.S. drug policy, in the case of Bolivia and in the Andes, has failed miserably. 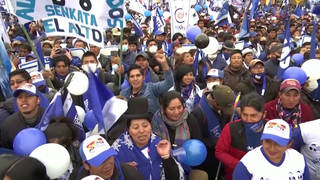