We end today’s show with another story about Evo Morales. In 2013, WikiLeaks founder Julian Assange played a pivotal role in helping National Security Agency whistleblower Edward Snowden leave Hong Kong for Russia. Once Snowden made it to Russia, Assange explored ways to help him reach Latin America. During the U.S. hunt for Snowden, Bolivian President Evo Morales’ plane was forced to land in Austria for 14 hours because of rumors Snowden was on board. Last week, Jeremy Scahill of The Intercept interviewed Assange via video stream for the launch of the book “The WikiLeaks Files.” Assange talked about WikiLeaks’ efforts to help Snowden gain asylum.

StoryMay 28, 2015Assange on the Untold Story of the Grounding of Evo Morales’ Plane During Edward Snowden Manhunt

AMY GOODMAN: I want to end today’s show with another story about Evo Morales talking about U.S. targeting. In 2013, WikiLeaks founder Julian Assange played a pivotal role in helping National Security Agency whistleblower Edward Snowden leave Hong Kong for Russia. Once Snowden made it to Russia, Assange explored ways to help him reach Latin America. During the U.S. hunt for Snowden, Bolivian President Evo Morales’s plane was forced to land in Austria for 14 hours because of rumors Snowden was on board.

Last week, Jeremy Scahill of The Intercept interviewed Julian Assange via video stream for the launch of Assange’s book, The WikiLeaks Files. Julian talked about WikiLeaks’ efforts to help Snowden.

JULIAN ASSANGE: He was in Moscow. And then we looked for, well, how can we get him out of Moscow without a diplomatic—sorry, without a passport? Because the airplanes won’t take him, commercial airliners won’t take him. And we noticed that there was an oil conference in Moscow, and President Maduro was going to be there, amongst other presidents. And one of those other presidents was President Evo Morales. Now, we then reached out our feelers to Maduro, who had already given an informal, and maybe even by that stage public, offer of asylum to Snowden. But we decided that because there was so much surveillance, that in this communication our code word for “Maduro” would be “Morales,” because he was so surveilled. And we had lawyers involved, and non-technical people who couldn’t really communicate themselves. And then Evo made a joke, while he was in Russia at this oil conference. President Evo Morales joked that—at the end of an interview, he said, well, he was off to meet Snowden now. It was just a joke.

Anyway, these things seemed to have combined, the interceptions of us and this joke by Morales. And the U.S. intelligence services put two and two together and made 22, and decided that they then had to expend vast amounts of political capital, ringing up the countries of Western Europe and trying to close their airspace to a presidential jet flight from Evo Morales, which they did. And Spain, France and Portugal closed their airspace, incredibly, to a presidential jet flight, because U.S. intelligence had asked them to, and done so without any legal or administrative process. And then the Morales flight took off and tried to go into its overflight path to refuel in the Canary Islands, to go off to Bolivia. They couldn’t do so because the airspace had been closed, and it was forced to land in Vienna. And then there was a 12-hour process, where President Morales was stuck in the airport waiting lounge of Vienna because he couldn’t get the clearance anywhere else. Now, a presidential jet is protected under the Vienna Convention. That’s the convention that in fact protects me in this embassy. It surrounds diplomatic territory. And presidential jets are listed as diplomatic territory. So you had a violation, enormous violation, of the Vienna Convention in Vienna.

Now, this really sealed Edward Snowden’s successful asylum application, when eventually it became clear it was too dangerous to take any other option, in Russia, because what could be the Russian response to this downing of President Evo Morales’s flight? The only response that they could give to seem like a credible country is that if he asks for—if Snowden asks for asylum, then they would accept the asylum request. And that’s what ended up happening. So this incredible diplomatic own goal led to this bullying of Western Europe, which provided the ultimate proof that Edward Snowden was being politically persecuted, which is what ended up giving him asylum.

AMY GOODMAN: Julian Assange, speaking via video stream during an event last week in Brooklyn, New York, for the launch of his book, The WikiLeaks Files. He spoke from the Ecuadorean Embassy in London, where he’s been holed up for over three years, where he received political asylum. Special thanks to Kathryn Ledebur, director of Andean Information Network in Cochabamba, and Nick Wing, the reporter for The Huffington Post. We will link to his new story, just out, called “Operation Naked King: U.S. Secretly Targeted Bolivia’s Evo Morales in Drug Sting.” 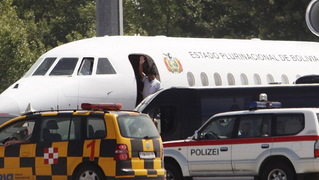