Noam Chomsky on Trump: “We Should Recognize the Other Candidates are Not That Different”

Noam Chomsky weighed in on U.S. presidential politics in a speech Saturday at The New School in New York. In addressing a question about Republican presidential candidate Donald Trump, Chomsky assessed the political landscape: “Today’s Democrats are what used to be called moderate Republicans. The Republicans have just drifted off the spectrum. They’re so committed to extreme wealth and power that they cannot get votes … So what has happened is that they’ve mobilized sectors of the population that have been around for a long time. … Trump may be comic relief, but it’s not that different from the mainstream, which I think is more important.”

StorySep 22, 2015Noam Chomsky on George Orwell, the Suppression of Ideas and the Myth of American Exceptionalism

AMY GOODMAN: After his talk, Professor Chomsky read and answered questions from the audience. This is one of those questions.

NOAM CHOMSKY: “What do you think about the antics of Donald Trump, in tangent to your earlier idea about American exceptionalism?”

Well, actually, I think we should recognize that the other candidates are not that different. I mean, if you take a look at—just take a look at their views. You know, they tell you their views, and they’re astonishing. So just to keep to Iran, a couple of weeks ago, the two front-runners—they’re not the front-runners any longer—were Jeb Bush and Scott Walker. And they differed on Iran. Walker said we have to bomb Iran; when he gets elected, they’re going to bomb Iran immediately, the day he’s elected. Bush was a little—you know, he’s more serious: He said he’s going to wait 'til the first Cabinet meeting, and then they'll bomb Iran. I mean, this is just off the spectrum of not only international opinion, but even relative sanity.

This is—I think Ornstein and Mann are correct: It’s a radical insurgency; it’s not a political party. You can tell that even by the votes. I mean, any issue of any complexity is going to have some diversity of opinion. But when you get a unanimous vote to kill the Iranian deal or the Affordable Care Act or whatever the next thing may be, you know you’re not dealing with a political party.

It’s an interesting question why that’s true. I think what’s actually happened is that during the whole so-called neoliberal period, last generation, both political parties have drifted to the right. Today’s Democrats are what used to be called moderate Republicans. The Republicans have just drifted off the spectrum. They’re so committed to extreme wealth and power that they cannot get votes, can’t get votes by presenting those positions. So what has happened is that they’ve mobilized sectors of the population that have been around for a long time. It is a pretty exceptional country in many ways. One is it’s extremely religious. It’s one of the most extreme fundamentalist countries in the world. And by now, I suspect the majority of the base of the Republican Party is evangelical Christians, extremists, not—they’re a mixture, but these are the extremist ones, nativists who are afraid that, you know, “they are taking our white Anglo-Saxon country away from us,” people who have to have guns when they go into Starbucks because, who knows, they might get killed by an Islamic terrorist and so on. I mean, all of that is part of the country, and it goes back to colonial days. There are real roots to it. But these have not been an organized political force in the past. They are now. That’s the base of the Republican Party. And you see it in the primaries. So, yeah, Trump is maybe comic relief, but it’s just a—it’s not that different from the mainstream, which I think is more important.

AMY GOODMAN: Noam Chomsky, speaking at The New School this weekend here in New York City, “On Power and Ideology.” Professor Chomsky is institute professor emeritus at Massachusetts Institute of Technology, where he’s taught for more than half a century. A world-renowned linguist and political dissident, Chomsky has written more than a hundred books; his latest, Because We Say So.

For the full transcript and video and audio of the speech, you can go to democracynow.org. We’ll also post the full Q&A right there at democracynow.org with Professor Chomsky. What did you find most interesting about this speech? You can tweet us, @democracynow, or go to our Facebook page.

That does it for the show. If you’d like to get a copy of the show, you can go to democracynow.org. On Wednesday, September 23rd, Democracy Now!'s Juan González will be moderating a panel on the Young Lords Party here in New York. It'll take place at 7:30 at the King Juan Carlos Center at New York University. 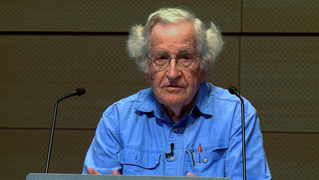