Pope Francis’ decision to canonize the 18th century Spanish missionary Junípero Serra has drawn a strong protest from many indigenous groups. Serra founded nine of the 21 missions in California that later were the basis of what is now the modern state. Hundreds of thousands of people died after the missionaries arrived. According to historian Alvin Josephy, what happened in California “was as close to genocide as any tribal people had faced, or would face, on the North American continent.” We speak to Valentin Lopez, chair of the Amah Mutsun Tribal Band. He’s been leading efforts to oppose Pope Francis’ decision to canonize Father Junípero Serra.

Web ExclusiveApr 22, 2021The Red Deal: Extended Interview with Red Nation Members About an Indigenous Plan to Save Our Earth

JUAN GONZÁLEZ: And, Valentin Lopez, I wanted to ask you about this—the founder of the California missions and the controversial role he is seen as having played throughout history, yet the pope is talking now about the possibility of canonization for him.

VALENTIN LOPEZ: Yes, he will be canonizing Junípero Serra in the—today, I believe, later today, here—in Washington. Junípero Serra was brutal for the California Indians. He was the first padre presidente. As a result of that, it was his responsibility to develop the systems and the regulations and the policies for capturing and caring for the—well, I say “caring for”—and holding the Indians. They would go out with soldiers and forcefully capture the Indians and march them to the mission. Once they got to the mission, they could not leave. They were a labor force for the missions. They were a slave labor force for the missions. If they ran away, they would send out the soldiers to capture them and bring them back, and they would be whipped repeatedly, sometimes for up to a month.

During the mission time—also, the other things that the missions are, that they separated families, mothers from fathers, from children. Part of the reason for that is so that the parents couldn’t pass on the culture to the children, and so it was an actual—a culturecide of the indigenous people there. The missions would use shackles, and they used stocks on the Indians. The women that were—when they separated the families, the women were repeatedly raped by the soldiers. There was no other women in California at that time. And so, the men would go into the women’s dormitory or barrack at nighttime and just repeatedly rape them. Those dormitories were locked, but the soldiers would just go on in and repeatedly rape them.

The conditions of the missions were horrible. They would just put a pot in the corner for the—to use as a bathroom, and that was all, and they were not showering and stuff like that, so they talked about the smell in there just being horrible. Whenever disease would come, it would just go through like a wildfire. It wasn’t unusual to have 10—I mean, 1,200 Indians dying at one time. In Mission San Juan Bautista, during that period of time, there were over 19,000—during a 36-year period of time—26, rather, year period of time, 19,421 Indians died. At the beginning of the mission period, there were 30,000 Ohlone Indians. That’s Monterey to San Francisco. At the end of the mission period, there were less than 100. In total, over 150,000 California Indians died under this system that Junípero Serra developed.

AMY GOODMAN: Professor Rubén Mendoza of California State University, Monterey Bay, was invited to the Vatican in April as part of a panel of experts to discuss the basis for Father Serra’s canonization. Mendoza told USA Today, quote, “Father Serra was not only a man of his time, he was a man ahead of his time in his advocacy for native people on the frontier.” Others have also defended the pope’s choice for canonization. Monsignor J. Michael McKiernan of Mission Basilica San Juan Capistrano said Father Serra helped spread the love and mercy of God.

MONSIGNOR J. MICHAEL McKIERNAN: I think the role of somebody like Serra, who had human flaws and difficulties and struggles and was set in his own time, yet had a vision and had an ability to look into a place and say, you know, “We need to bring Christianity here, share the love of God and the mercy of God with the people of this time.”

AMY GOODMAN: If, Valentin Lopez, you could respond to these comments?

VALENTIN LOPEZ: Two things. When they were closing the mission, the last padre presidente said, “We are going to be judged very harshly. All we have done was consecrate, baptize and bury the Indians. There are no Indians along the coast of California. We have killed—they’re all dead.” And they said, “We need to come up with a”—basically, that we need to come up with an alibi or an excuse for what happened. And so the Catholic Church started creating the myth that Junípero Serra was wonderful to the Indians, that the Indians came in voluntarily, they came in for a better life, they came in to learn agriculture, and they came in to find God. And they started teaching that. And then, in the California schools, when they started developing their curriculum for schools to teach the mission period, they went to the churches to find out about the mission period, and that’s what they learned. And so, for generations, you know, I mean, ever since the time beginning, that is what they taught, that Junípero Serra was a very gentle and kind person. But there’s nothing that can be any further from the truth.

And saying that he is a man of his—well, the Catholic Church has evidence of what I just said. The Catholic Church, if you went to a lot of the Catholic websites, they will say that Junípero Serra was the first person to develop a bill of rights and that he developed a 32-point bill of rights for the California Indian. And all of the Catholic sites refer to that. But yet, whenever you go look for that site—that bill of rights, it’s very hard to find. And when you find it, all it is is a document that is meant to increase Serra’s power over the military and give him more control over the Indians. Spain wanted to go to develop cities in California, so they can bring in other people. They wanted to develop San Jose and Los Angeles. But Serra wanted to build additional missions and stuff for the Indians. And as a result of that, there was a big struggle, and so he wrote a 32-point bill of rights for the Indians that had nothing to do with Indians.

JUAN GONZÁLEZ: Well, Valentin, I wanted to ask you, in—contrary to what the pope has done here with the Spanish presence in the United States, he was speaking earlier this year in Bolivia, where he apologized for the Catholic Church’s complicity in the oppression of indigenous people in Latin America. This is what he said.

POPE FRANCIS: [translated] I say this to you with regret: Many grave sins were committed against the native peoples of America in the name of God. My predecessors acknowledged this, CELAM has said it, and I, too, wish to say it. Like Saint John Paul II, I ask that the church “kneel before God and implore forgiveness for the past and present sins of her sons and daughters.” I would also say, and here I wish to be quite clear, as was Saint John Paul II: I humbly ask forgiveness, not only for the offenses of the church herself, but also for crimes committed against the native peoples during the so-called conquest of America.

JUAN GONZÁLEZ: That was Pope Francis in Bolivia. But many native peoples are calling on him to renounce, finally, the doctrine of discovery that was pronounced in certain papal bulls. Could you talk about that, as well?

VALENTIN LOPEZ: The documents of discovery were documents that were issued—were papal bulls. That means they’re basically the word of God, given by the popes in the mid- to late 1400s and very early 1500s. The popes issued a number of papal bulls that said that it was—that the indigenous people are pagans, savages and heathens, that the indigenous people have no soul, indigenous people are the enemies of Christ, that we should be cast into perpetual slavery, and that all our property and our possessions should be taken. And that right there was the basis for the conquering and conquest of much of the world, including India, Indonesia, the Pacific Islands and all of the Americas.

AMY GOODMAN: You wrote a letter to the pope opposing the canonization of Father Serra; as well, you wrote it to Jerry Brown, the governor of California. Did you receive a response on either case?

VALENTIN LOPEZ: We’ve actually written six letters to Pope Francis and two letters to Governor Brown. We received one response about two weeks ago from the archbishop of New York, who’s at the Holy See Mission at the United Nations. Basically, he said that the church has received the letters and read them, and the secretary of state asked him to forward an historical note, one-page historical note, that was developed in 1986, I believe. And that historical note said very simply that the church has looked at all the records and had the best historians take a look at Serra’s life, and they all conclude that Serra is worthy of sainthood. And they do this with—and they are recommending the sainthood with a clear conscience.

AMY GOODMAN: We’re going to break and come back to this discussion. Valentin Lopez is chair of the Amah Mutsun Tribal Band, opposing the canonization of Father Serra. We’re also joined by Julie Byrne, a professor at Hofstra University. Her forthcoming book is called The Other Catholics. And when we come back, we will be speaking with Esmeralda Domínguez, why she walked with about 100 women, many of them undocumented, to greet the pope in Washington, D.C., today. Stay with us. 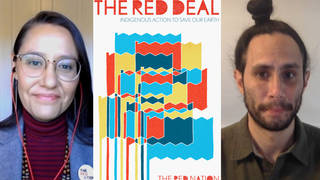 The Red Deal: Extended Interview with Red Nation Members About an Indigenous Plan to Save Our Earth