M.I.A.'s video for her new song “Borders” has caused some controversy in the professional soccer world. The French team Paris Saint-Germain has requested the video be taken offline because M.I.A. is seen in the video wearing a modified version of the club's shirt. The shirt has the words “Fly Pirates” across the middle instead of “Fly Emirates.” In this excerpt from a forthcoming interview on Democracy Now!, M.I.A. responds to the controversy.

AMY GOODMAN: Talking about making men feel uncomfortable, the French team Paris Saint-Germain has requested that your “Borders” video be taken offline because you’re seen in it wearing a modified version of the club’s shirt. The shirt has the words “Fly Pirates” across the middle, instead of “Fly Emirates.” The soccer team is also seeking compensation for, quote, “the harm we have suffered.” Your thoughts about this?

Obviously I don’t want to talk about fashion, but this is a fashion issue. You know, it’s a T-shirt. And the bigger picture and the bigger message in the video is completely ignored. It’s gone over their head. And I think that it’s really difficult to control something like that. You know, to say refugees or immigrants don’t wear sportswear, it is like the—it’s like the wrongest thing. If you look at—if you look at Third World countries, not just the refugee issue, but if you just look at Third World countries as a whole, or look at war zones or any slums or any even, you know, middle-class families and upper-class, whatever the demographic is in the Third World, you would find sportswear. That is just the national—it’s just become the national, international, the global, universal uniform for everybody.

Even in 2016, you know, if you look out of the window in New York City, how many people are you going to find wearing a Nike tick or a Adidas stripe or the logo of a clothing company that is connected to a sports brand? I would say maybe one out of two people or—you know, I don’t—the percentage is pretty high, because in London that’s like the look. Everybody has, you know, sportswear like they’re going to the gym. That is the new style at the moment.

But wearing football tops has been the uniform, or wearing tracksuits in Palestine, you know, throwing stones has been the uniform of the—I guess, the underprivileged people of the world, because that is the cheapest thing we can find. It’s bootleg stuff. We bootleg the biggest brands. You know, it used to be Versace and D&G and things like that in the ’90s, you know, and then, in the 2000s, it was just sportswear.

And I think—I think for them to control that is a really stupid thing. You know, I can’t control something like that. And it’s just realistic, I thought, in representing the migrant community. You know, how do you leave that piece out, if you’re making something or trying to make something realistic? 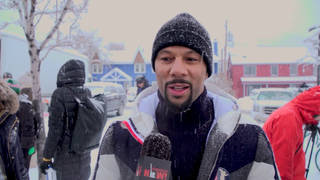