In 2010, Jane Mayer published an extensive profile of the billionaire Koch brothers in The New Yorker, exploring their quiet effort to funnel more than $100 million to right-wing causes and undermine President Obama’s policy agenda. Six years later, Mayer reveals her subjects responded by hiring a private firm to discredit her reporting. Mayer details the episode in her new book on the Kochs and their right-wing, ultra-rich allies, “Dark Money: The Hidden History of the Billionaires Behind the Rise of the Radical Right.”

AMY GOODMAN: What happened to you, Jane, after your big exposé in 2010 in The New Yorker magazine?

JANE MAYER: This was something that had never happened to me before, but—even though I’ve covered all kinds of things, from wars to the CIA. But I suddenly found myself about to be attacked in the press, the right-wing press, on charges that were drummed up by a private eye that had been digging into me. That private eye was, it turned out—and I report about this in the book—was working with top Koch operatives, who I name in the book. It’s all been checked. The Kochs have had their chance to say it’s not so. They have never denied it, and neither has the detective. And they tried to plant misinformation about me in the press. Luckily, it was so false, nobody ran with it.

JANE MAYER: OK. I was working at The New Yorker at the time, and on January 3rd, 2011, David Remnick, the editor of The New Yorker, was called by the—or emailed by the two publications that wanted to go with stories saying that I was a plagiarist and supposedly had stolen lines from four different other writers. Now, nobody has ever accused me of this in my life. And the stories were things that had been out for years. And David asked me, “What is this?” I took a look at it, and I immediately realized I better call the authors and see if they have any complaints. None of them did. All of them went on the record saying, “This isn’t plagiarism. We have no complaints against Jane.” And they were willing to be stand-up people and back me up. I went back to the right-wing news organizations and said, “This is false. Here are the statements from the writers.” And they never published these.

But I wondered what had happened, and so did the New York Post, which was about to do a story on it. And Keith Kelly, the media reporter there, started asking, “Who’s trying to smear Jane Mayer?” And he started doing a series of stories and floating the idea that the Koch brothers were behind it, because they had been unhappy with the big piece I did about them. Anyway, it took years—really, three years—but eventually I was able to connect the dots. And you’ll see the story in this book. And amazingly, the detective that they hired to do this was the former commissioner of police in New York City, Howard Safir. And it fell flat. I mean, I’m glad to say it was—it was ridiculous. In fact, one of the stories that I was supposed to have plagiarized from, not only did I—

JANE MAYER: Well, anyway, one of the stories that I was supposed to have plagiarized from, when I called the author of it, he looked it up, and he said, “Not only did you not plagiarize from me, you credited me in the next sentence and linked to me online.” And then it turned out my own husband had edited the story. It was at The Washington Post, so I guess I was supposed to be plagiarizing from my husband. I don’t know. It fell apart. But it was really ugly.

AMY GOODMAN: Did Safir admit this?

JANE MAYER: He’s been asked multiple times about it, and he has simply said, “I can’t comment.”

JANE MAYER: I think it’s the comprehensive nature of what they’ve built. As I said earlier, what I wrote about before was the tip of the iceberg. But this is a really—it’s a comprehensive political machine manufacturing political change in the country. And it operates on many, many levels, with tons of money. And I think, you know, you—it’s hard to describe it, unless you read the story, but it filters through so many different levels, that it’s fascinating. And I think it’s—you know, in some ways, it’s a testimony to Charles Koch. He is an engineer who looked at American politics and thought, “How do you manufacture change here? What widgets does it need? What do you do?” And he’s been a terrifically successful businessman, and he’s brought the country far in the direction that was considered fringe many—not that many years ago.

JUAN GONZÁLEZ: And some of the most surprising participants in the group, that you didn’t expect would be in the group?

JANE MAYER: Well, I think it’s interesting that these New York finance people are in it, because for the most part they don’t share this radical worldview. They just care about wealth accumulation, basically. And, you know, I mean, David Koch’s involvement himself in this—I mean, he’s the wealthiest resident of Manhattan. His name is on every cultural institution here. He travels in circles that are full of open-minded people. Yet he’s backing this machine that’s pushing the country in a direction that I think many Manhattanites might be surprised at.

AMY GOODMAN: Jane Mayer, thanks so much for being with us, author of the new book, Dark Money: The Hidden History of the Billionaires Behind the Rise of the Radical Right.

That does it for our broadcast. I’m Amy Goodman, with Juan González. Our website is democracynow.org. We’re hiring a director of finance and operations as well as a development director. Check democracynow.org. Thanks for joining us. 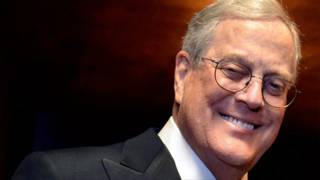