“A Profound Day”: Mother of Teen Who Was Shot Dead over Loud Music Praises Obama’s Action on Guns

When President Obama spoke about gun control on Tuesday, he was surrounded by family members of people killed in shootings. Standing just behind him was Lucia McBath, the mother of Jordan Davis, the 17-year-old who was shot dead in 2012 in Florida at a gas station in a dispute over the volume of a car stereo. Lucia McBath has since become a leading gun control advocate.

AMY GOODMAN: President Obama, speaking Tuesday at the White House, surrounded by family members of people killed in shootings, including Lucy McBath, who joins us now from Washington, D.C. She’s the mother of Jordan Davis, the 17-year-old who was shot dead in 2012 in Florida at a gas station by a man named Michael Dunn, who confronted Davis and his friends about the volume of their car stereo. Lucia McBath has since become a leading gun control advocate.

We welcome you back to Democracy Now!, Lucy.

AMY GOODMAN: You were front and center, standing right behind President Obama as he spoke yesterday. Talk about the significance of what he has done.

LUCIA McBATH: Well, yesterday was a very profound day towards the movement of gun violence prevention in this country. And specifically speaking as a victim of gun violence, standing on that platform with President Obama and all the other victims, it was just an amazing day for us, specifically because we’ve been on the front lines. We have been fighting this fight for some time, and it’s been very disheartening, time and time again, to watch our legislators not be beholden to the constituents that they—that have placed them in office, but to be beholden to the gun lobby. And for the first time now, we see some, you know, concerted effort and change in keeping our communities and our families and our futures safe. So yesterday was the right move, the right step, and we are definitely going in the right direction.

AMY GOODMAN: Do you think that these executive orders would have saved Jordan’s life, your son?

LUCIA McBATH: No, I don’t believe so, because, in my case, Michael Dunn had purchased his guns legally. That was not an issue. For us, it would be more so dealing with the Standard Your Ground laws and the application of those laws around the country. But definitely, the executive orders that are being put in place by President Obama are a tremendous start towards making sure that, you know, gun sellers in this country are accountable for the guns that they’re selling, who they’re selling them to, making sure that they are licensed, making sure that they are instituting background checks on any guns that they’re selling to individuals. We have to keep guns out of the hands of dangerous criminals.

And as President Obama said yesterday, he’s going to make sure that we spend more time and effort in managing those individuals that need help with mental illness, keeping guns out of their hands, and just also—you know, just the huge proliferation and trafficking of guns in this country. These are very, very profound steps. He’s moving in the right direction. If our legislators have not been accountable to keeping our communities safe—with Manchin-Toomey, they’ve turned their backs on the American community—then if he has to take executive orders to keep us safe, then we applaud him for doing so.

AMY GOODMAN: Lucy McBath, the story about your son Jordan Davis’s death was turned into a film last year called 3 1/2 Minutes, 10 Bullets. I want to play the film’s trailer.

REPORTER: Forty-five-year-old Michael Dunn is being charged with shooting and killing 17-year-old Jordan Davis. The confrontation began over loud music.

CORY STROLLA: Was there music playing in the car?

CORY STROLLA: What type of music?

ERIN WOLFSON: Did the defendant say anything about the music?

I look, and I’m looking at a barrel.

POLICE DETECTIVE: There’s no weapons in their car.

MICHAEL DUNN: Could have been just a stick.

POLICE DETECTIVE: Could it have been your imagination?

MICHAEL DUNN: It cert—well, no. I mean, anything’s possible, I guess.

UNIDENTIFIED: Maybe they didn’t have a gun, but he thought they had a gun.

UNIDENTIFIED: They think it’s a gun when it’s in the hands of a young African American.

RON DAVIS: Trayvon Martin’s father texts me: “I just want to welcome you to a club that none of us want to be in.”

UNIDENTIFIED: You can say later that maybe he did have it.

UNIDENTIFIED: It’s time to pick up where Dr. King left off.

UNIDENTIFIED: I’ve never covered a trial with this much international attention.

UNIDENTIFIED: This was a 21st century lynching.

RON DAVIS: Was he all right to kill my son?

AMY GOODMAN: A trailer for 3 1/2 Minutes, 10 Bullets. Lucy McBath, as you listen to that and you stood behind President Obama, what do you think now has to happen in this country?

LUCIA McBATH: Well, as we know that, you know, this was just a giant leap forward, but there’s so many parts and pieces to the gun culture and the gun problems that we have in this country, there’s a lot more that has to be addressed. But what we want to make sure that we begin doing is—you know, definitely background check legislation in place for all gun sales in this country is definitely a deterrent. We’re not going to be able to take all the guns off the street. And most definitely, President Obama is not trying to infringe upon anyone’s individual Second Amendment rights. He wants to make sure that he tempers and balances with those rights commonsense measures in our gun laws to protect us, basically, from ourselves. There are a lot of moving pieces and parts. This is going to be a long battle and a long process. It is a cultural shift and change. And as President Obama said yesterday, that takes a long time.

So, moving forward, we begin with what we know we can do now—background check legislation, making sure that gun dealers and sellers are fully licensed, making sure that we give more help to those individuals in this country who are mentally ill so that they’re not getting their hands on guns, keeping guns out of the hands of convicted criminals, and, you know, beginning to really see a drop in some of the gun trafficking, the illegal gun trafficking. As he also said, too, is that—beginning to spend more time and effort—the Department of Homeland Security and Department of Justice, you know, spending more time and effort on research for gun safety technology. These are all beginning measures, but there’s so much more that has to be done, and it’s going to take years to really stem this tide of gun culture in the country.

AMY GOODMAN: I wanted to turn to a clip of you testifying, Lucy McBath, at the first-ever Senate hearing on Stand Your Ground laws. This was back in October, October 29th, 2013.

LUCIA McBATH: I was raised in a family steeped in justice and confident in the triumphant goodness of humanity. My mother was a registered nurse. And my father, who served in the U.S. Army Dental Corps, was also for over 20 years president of the NAACP for the state of Illinois. He worked actively with President Lyndon Baines Johnson in the signing of the Civil Rights Act of 1964. If he could see me here today testifying in front of the United States Senate, he would be beaming with pride and amazed at how far his daughter had come—until he came to understand what brought me here.

LUCIA McBATH: Well, Stand Your Ground is just one of the laws that we will definitely have to begin to amend in the country, and, you know, because statistics are showing that, you know, so many more people in this country are dying under what’s deemed justifiable homicides under these laws. And so, those are definitely going to have to be addressed. We know in the states where there have been background check legislation put in place and other measures, we know that these justifiable homicides have dropped. So those are definitely—you know, that’s the course of action that we have to continue to look forward to. As I said earlier, you know, piece by piece, bit by bit, there are so many moving parts and pieces to the gun culture, and it’s just a matter of identifying what we can do best first, and then begin to move on the other measures of changing the gun laws in our country.

AMY GOODMAN: And your father working with Dr. Martin Luther King, who was assassinated—gun violence in 1968. Even after that, even after President—after Robert Kennedy was assassinated a few months later, President Johnson could barely get passed the kind of gun control he wanted to. He was thwarted by the gun lobby in the United States. What do you say to the NRA today?

LUCIA McBATH: Well, what I say is that, you know, the NRA today is not the NRA of 25, 30 years ago. And what we do know is that 90 percent of the NRA card-carrying members in this country agree with us, is that there have to be some commonsense measures put in place to keep our people from dying in the streets such as they are. And so, if it’s the NRA leadership that is pushing this fear mongering and this kind of extremist agenda, then we need to expose that. The American citizens need to understand and know what’s happening. And it’s not necessarily all of the NRA members, because most of them are law-abiding gun owners. They’re law-abiding hunters. They’re law-abiding enthusiasts, gun enthusiasts. And those aren’t the ones that we’re going after. But we need to make sure that we’re exposing what’s happening with the NRA gun lobby. Most people that I talk to around the country say that they feel helpless and hopeless. They don’t know what to do. So, as much as I know to do is that we give people the information that they need. We are doing the policy research. We are doing the work bringing to light what’s truly happening in this country. And we’ll continue to do so.

AMY GOODMAN: I want to thank you so much, Lucy McBath, for joining us, again, mother of Jordan Davis, the 17-year-old killed in 2012 in Florida in a gas station parking lot, killed by a man who didn’t like the fact that Jordan and his friends were in their car playing loud music. Lucy McBath, now a leading gun control advocate, especially in the evangelical community. When we come back, a debate on gun control. Stay with us. 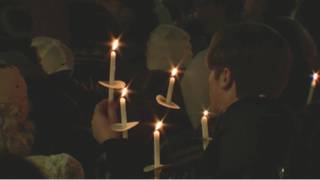