As part of our historic roundtable with former political prisoners who were in the Black Panther Party, we speak with Eddie Conway, who was released from prison in 2014 after serving 44 years for a murder he denies committing. He was convicted in the killing of Baltimore police officer Donald Sager but has maintained his innocence, saying that he was set up as part of the FBI’s COINTELPRO.

JUAN GONZÁLEZ: This month marks the 50th anniversary of the founding of the Black Panther Party, and we’re spending the hour focusing on an overlooked part of its legacy: political prisoners in the United States who are former Black Panthers. I want to bring into the conversation, from Baltimore, Eddie Conway, former Baltimore Black Panther leader, who was released from prison in 2014 after serving 44 years for a murder he denies committing. He was convicted in the killing of Baltimore police officer Donald Sager, but has maintained his innocence, saying that he was set up. For years, Conway’s supporters campaigned for him to be pardoned.

JUAN GONZÁLEZ: Talk to us about how you got involved in the Panther Party and what—the incidents that led up to your original arrest.

MARSHALL ”EDDIE” CONWAY: Well, primarily, I got involved in the Panther Party as a result of me deciding not to go to Vietnam and come home from the Army, because there was a tremendous amount of riots taking place in the United States in ’65, ’66, ’67. I wanted to see if I could come and help solve whatever problems it was in terms of the black community rebelling like it was, joined the NAACP, worked with CORE, tried to integrate the workplaces. During the process of that, I found out that there were serious problems in the community. Young children were going to school without food. There was no medical care. There was a number of things. The community was under attack by the police departments, etc. So I looked around and identified what I thought was the best organization to address that. It was the Black Panther Party, so I joined the Black Panther Party. We established a—helped institute a medical clinic, a breakfast program, a educational program, community control the police, etc.

And during that period, the FBI, with its COINTELPRO program, decided to destroy the Black Panther Party. And within a year and a half, it destroyed about 25 of our 37 state chapters, ran the leadership out of the country, the primary leadership, or locked them up or assassinated them, and locked up the secondary leadership or either forced them to leave the country. And I was part of that secondary leadership. I end up getting locked up illegally. As a result of a shooting incident between Panthers and police, a police got killed, one got wounded. The other ones engaged in a shootout. A couple days later, I was put in with two other Panthers that had been locked up in the area, and taken from my job and tried, convicted, found guilty and spent 12 years in prison before they made a determination that we had all been tried illegally in the state of Maryland according to the law, but it took another 32 years to actually win our release, or win my personal release.

JUAN GONZÁLEZ: And, Eddie Conway, one of the—you mentioned that wave of repression, first of the top leadership, then of the secondary leadership. One of the things I remember was, years after that repression occurred, The New York Times reported about a secret poll that the federal government had done and where the federal government concluded that at least 25 percent of all African Americans in the country were supporting the Black Panther Party. So they were deeply worried that the black community was being increasingly radicalized as a result of your efforts.

MARSHALL ”EDDIE” CONWAY: Well, not only that, but their problem was that we worked—we formed alliances with groups in other communities, the Native American community, the AIM. We formed alliances with the Latino community, the Brown Berets; with the Puerto Rican community, the Young Lords; the white community, the Patriot Party, White Panther Party, etc. We formed alliances throughout the country, but alliances were also being formed and our programs were being duplicated in India, in Israel, in Africa, in Europe, in the Caribbean and so on. So it was those ideas that were spreading and that unity in terms of creating alliance that scared the government the most. And so, they weren’t just concerned about what was happening in the black community, but they was concerned about the ideas of international socialism spreading throughout the radical communities around the world taking an example from our—the way we were building and organizing.

And they had to disrupt that building and organizing. And the only way they could was they labeled us as black militants with only a self-defense component, and they goaded us into—by killing us, assassinating us, blowing up our building and whatnot, they goaded us into resisting, protecting the stuff that we had built, and it actually led to a split, for the want of a better term, between those of us that thought that building a broader base among the masses was the correct way to go and those of us that was tired of being persecuted and attacked and tired of seeing our members assassinated.

NEXT“Treat Them Like the Heroes They Are”: Fmr. Black Panthers Call for Release of Those Still Locked Up 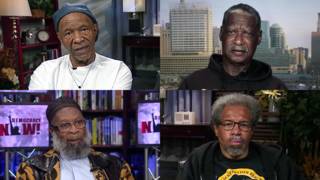