Some members of the Black Panther Party have been behind bars for more than four decades and are now suffering from poor health. In some cases, court documents show they were punished essentially for being in the black liberation struggle. Many continue to face parole board denials based on their relationship with the party. We discuss their cases with Sekou Odinga, a former Black Panther who was a political prisoner for 33 years and was released in November 2014; and with Albert Woodfox of the Angola 3, who recently met Judge James Brady of the Middle District of Louisiana, who issued an order saying that he should be immediately released and barred from being retried for the killing of Angola prison guard Brent Miller. Judge Brady later said, “I did what a judge is supposed to do.”

StoryMar 29, 201943 Years: Meet the Man Held in Solitary Confinement Longer Than Any Prisoner in U.S. History

AMY GOODMAN: Sekou Odinga, while you’re out of jail, you’re very much focused on those who are still in prison. Can you talk about some of those cases?

SEKOU ODINGA: Yeah. We have a number of brothers left in the prisons, about 15 of them. And for the most part, they’re in bad condition. Most of us are getting older, you know. I believe all of them is 60 years or older. They’ve been in prison for long periods of time. Many of them should have never been in prison at all. They were framed and illegally convicted. So, I’ve been trying to, as well as many of the other brothers—I know all three of the other brothers that’s on this program with us have been advocating for the release of these other political prisoners, prisoners like Mumia Abu-Jamal, Sundiata Acoli, Mutulu Shakur, Robert Seth Hayes, Kamau Sadiki, Veronza Bowers. It’s another—like I say, it’s 15 from the party itself, and there’s many other political prisoners in this country.

You know, this country maintains that there is no political prisoners, that everybody is criminals, but it’s just not true. You know, the same—the same things that we hurray and support in other places, like people like Nelson Mandela, our prisoners were doing the same thing, and they were captured and convicted of the same things. And we should remember them and treat them like the heroes they are. They earned that respect. Most of them, like I said, are getting older. A lot of them are sick.

You know, a lot of them are being held even after the courts have ordered them released, people like Veronza Bowers, who was—did all of his time and then was—after he was on his way out, they locked him back up, with no charges, and he’s been locked up now for over 11 years, 11 or 12 years now, after he did all of his time. Sundiata Acoli was—won in—won a court case where the judge ordered him released, and they refuse to release him. And they keep going back with appeals so they can keep him in jail. Now he’s almost 80 years old. You know, it’s—

AMY GOODMAN: In Sundiata Acoli’s case, the judge ordered the parole board to “expeditiously set conditions” for his release. He said then of his June 2016 New Jersey Parole Board hearing, they asked me “almost nothing about my positive accomplishments. They … asked: ’Aren’t you angry … they broke Assata out of prison instead of you?’ My response was: 'No, I don't or wouldn’t wish prison on anyone.’”

SEKOU ODINGA: Yeah. So, these brothers need to be released. And we need to—first of all, we need to know who they are. People don’t even know that we have political prisoners. Most of the names that I mentioned, most people wouldn’t even—wouldn’t recognize it, if they’re not already politically involved. We want to raise their names up to a point where people will start knowing who they are and start demanding their release.

JUAN GONZÁLEZ: Is there any hope that President Obama might do something before he leaves office?

SEKOU ODINGA: Yes, there’s hope. There’s definitely hope. And I’m sure that those—well, I know for a fact that the prisoners, the political prisoners in the federal system, is asking him for clemency or for some kind of release. I don’t know if he’s going to recognize them and help them. But—

AMY GOODMAN: Albert Woodfox, earlier this month you had the opportunity to meet the U.S. District Judge James Brady of the Middle District of Louisiana, who issued the order saying you should be immediately released and barred from being retried for the killing of the Angola prison guard, Brent Miller, whose former wife even said she did not believe that you had done this. Judge Brady later said, quote, “I did what a judge is supposed to do.” We only have a minute, but what was it like to meet him? And the power of judges in some of these cases, as prisoners, Black—former Black Panthers, are still seeking release?

ALBERT WOODFOX: Well, you know, at the time, I was speaking at Southern University Law School in Baton Rouge, Louisiana. And it was a total surprise to know that Judge Brady was in the audience. And so, after speaking with the law students and attorneys and other people involved in the judicial system, I learned that Judge Brady was there, and I wanted to thank him for having the courage to apply the law and not allow my being a former Black Panther Party or my activism in prison to cloud the issues, and to apply the law. And that’s exactly what he’d done. You know, of course, we know that the state of Louisiana, mostly through the Attorney General Office, continuously appeal his rulings, and in most cases his rulings were reversed or stayed. And this process was drug out over a 44-year period.

AMY GOODMAN: We have to leave it there, but it’s been a fascinating discussion. I want to thank Albert Woodfox and Robert King, now in Austin; Sekou Odinga, joining us here in New York; and Eddie Conway in Baltimore. Go to democracynow.org for our special report on the Black Panthers who are still behind bars to find out more about their cases. 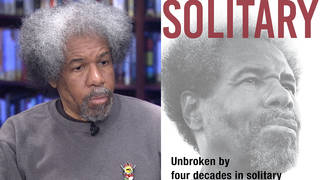