As Ava DuVernay’s new documentary “13th” opens at the New York Film Festival, we speak to two people featured in the film: Malkia Cyril of the Center for Media Justice and Kevin Gannon of Grand View University.

AMY GOODMAN: Let’s turn to another clip of 13th.

KHALIL GIBRAN MUHAMMAD: The war on drugs had become part of our popular culture in television programs like Cops.

KEN THOMPSON: When you cut on your local news at night, you see black men being paraded across the screen in handcuffs.

BAZ DREISINGER: I mean, I’m a big believer in the power of media, full of these clichés that basically present mostly black and brown folks who seem like animals in cages, and then someone could turn off the TV thinking, “It’s a good thing for prisons, because otherwise those crazy people would be walking on my block.”

CORY GREENE: Creating a context where people are afraid. And when you make people afraid, you can always justify putting people in the garbage can.

REPORTER 1: Chances are you could run into a kid waiting to relieve you of your purse or wallet.

MALKIA CYRIL: Every media outlet in the country thinks I’m less than human. I began to hear the word “superpredator” as if that was my name.

BRYAN STEVENSON: “Superpredators,” end-quote. That’s the word they use to describe this generation. And it was very, very effective.

HILLARY CLINTON: They are not just gangs of kids anymore. They are often the kinds of kids that are called superpredators—no conscience, no empathy.

MICHELLE ALEXANDER: Animals, beasts, that needed to be controlled.

MAYOR ED KOCH: When those grandmothers say, “But he’s a good boy. He never did anything,” don’t you believe it.

DEBORAH PETERSON SMALL: Many black communities began to actually support policies that criminalize their own children.

REPORTER 2: Last night, the eight teens accused in the attack were arraigned on charges of rape and attempted murder.

MALKIA CYRIL: In the Central Park jogger case, they put five innocent teens in prison, because the public pressure to lock up these, quote-unquote, “animals” was so strong.

MALKIA CYRIL: Donald Trump wanted to give these kids the death penalty, and he took out a full-page ad to put the pressure on. These children, four of them under 18, all went to adult prisons for six to 11 years, before DNA evidence proved they were all innocent.

On Saturday, just before I sat down with Ava DuVernay, I sat down with two of the people featured in the film. Among those who are in the film, Michelle Alexander, Angela Davis—Common writes the music—but Malkia Cyril of the Center for Media Justice and Kevin Gannon of Grand View University in Iowa. I started by asking Malkia what she wanted the film to convey.

MALKIA CYRIL: My biggest hope is that people understand two things. One, that slavery has already been amended once; let’s not do it again. As we get all this technology pouring into the hands of police officers—electronic monitoring, aerial surveillance over Baltimore—it’s critical that we don’t repeat the mistakes of the past and turn our communities into open-air prisons, even as we decarcerate the facilities themselves. So that’s the biggest thing that I hope people walk away with.

And, two, I want people to walk away with the knowledge that, you know, this country was built on the bones, the work, the labor, the lives of black bodies. It continues to profit from that exploited labor. And we continue to profit from this system, that we call white supremacy, that we don’t want to accept or acknowledge. And that system is going to come to—excuse me, that system is going to come to an end.

AMY GOODMAN: Professor Gannon, this trajectory from the 13th Amendment to mass incarceration, take us on that journey.

KEVIN GANNON: Well, as the film talks about, the—you know, we like to look at the 13 Amendment as something that ended slavery. You know, the Civil War ended slavery. That’s our mythology. But, of course, it doesn’t. You know, slavery persists. And slavery is a state of profound unfreedom, of not being an autonomous individual, of being owned and subjugated under another. So, the clause in the 13th Amendment that says, you know, except in the cases of criminal, you know, incarceration, that’s the lever.

KEVIN GANNON: Well, it’s—the 13th Amendment says neither slavery nor involuntary servitude shall be permitted, so it becomes unconstitutional, but there is that dependent clause in there: except in the cases of having committed a crime. And so, here is this lever now to basically carry forward slavery under a different guise. You know, slaves have prison uniforms now. And so the convict labor gangs of the late 19th century and the early 20th century, that’s not a coincidental, that’s not a novel invention. If you look at immediately after the Civil War, the ex-Confederate states passed laws called Black Codes that basically criminalize an entire range of behavior. You could be in prison for a year if you were arrested for vagrancy, and “vagrancy” was defined so broadly—I mean, things like walking down the street and looking impudently at somebody, not being able to produce your labor contract for the plantation that you were working for. You know, so this was mass criminalization of blackness. It was an attempt to retain as much of slavery as possible without the name of slavery.

AMY GOODMAN: And then take it forward to now.

KEVIN GANNON: Well, it’s—I mean, that’s the structure that’s built. You know, it continues upon the structures of inequality built before the Civil War. It maintains the racial caste system that the United States was built on, as Malkia said, and continues to profit from. And as long as African Americans and people of color are seen as the other, as dehumanized, as outside of civil society, that’s where we get to today. And it’s just different iterations built upon that same structural outlook.

AMY GOODMAN: Kevin Gannon of Grand View University in Des Moines, Iowa, and Malkia Cyril of the Center for Media Justice, both appear in Ava DuVernay’s new documentary, 13th, which will be released by Netflix on Friday.

This is Democracy Now! When we come back, another of the people featured in the documentary, Lisa Graves of the Center for Media and Democracy, on the privatization of criminal justice in this country and its relationship with ALEC, the American Legislative Exchange Council, as well as the Koch brothers. Stay with us. 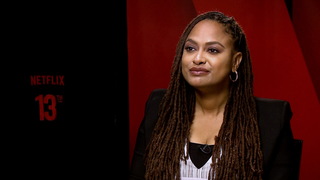