Overnight on Saturday in North Dakota, Native Americans resisting the $3.8 billion Dakota Access pipeline reported a brush fire near their main resistance camp. They say they called 911, but no emergency teams responded. They also say the surveillance planes and helicopters, which have been flying almost constantly over the region in recent weeks, stopped flying about two hours before the fire began. Protectors believe the fire was intentionally lit by people working for Dakota Access. For more, we speak with Dallas Goldtooth, organizer with the Indigenous Environmental Network.

AMY GOODMAN: Now, if you could talk about the fire that was set, where did it happen and what you understand was its origin?

DALLAS GOLDTOOTH: No, this happened last night. This was a—or two nights ago. It was just to the immediate west of the Oceti Sakowin camp across Highway 1806. There was some mysterious incident of a vehicle that came out of nowhere, that was almost acting as a distraction, was making a—spinning doughnuts in the middle of the road, and then it sped off to the south. And immediately after that, flames were seen on top of the hill to the west. There was a lot of—there’s documented footage that what appears to be a drip line, which is a—from what I understand, is a technique used in firefighting. I mean, it was very, very clear that that brush fire that happened was an act of arson by unknown individuals. But given the recent events with the Dakota Access worker, given the escalation of law enforcement, that, you know, a lot of fingers are pointing towards Dakota Access that—as being a culprit behind this late fire. And thank God that the wind was pushing away from the camp. The fire spread pretty large.

And the thing that’s most disturbing to me is this, Amy, is that when—on October 27th, when the police attacked our peaceful protectors at the frontline treaty camp, the excuse they used to move upon that camp was so that they could clear a barricade that we set up, a temporary barricade that we set up, so that emergency services could be delivered to the Oceti Sakowin camp, our main camp. Now, their reason for moving on, using rubber bullets and pepper spray and concussion grenades upon our water protectors was so that they could deliver—have access to deliver emergency services, ambulances and fire equipment, if needed, to the main camp. So, why is it that a number of days later, when a fire actually does happen, they refuse—the Morton County Sheriff ignores the calls and pleas for help and does not send any ambulances or fire trucks to the place that they stated that they need to get to? Why is it that there was no delivery of any kind of services until six hours later by the National Guard, who brought in a helicopter to drop water on a fire that had at that point already been put out? Why is it that Bureau of Indian Affairs officers, who were on site with medical emergency service, with firefighting equipment, who were not allowed to combat that fire without explicit permission from Morton County, they never received that permission? They asked. Morton County never gave them the permission to fight that fire. They just let it burn. I mean, there’s—it’s obvious collusion between Morton County and the Dakota Access pipeline. And that collusion is causing a very, very dangerous situation for our water protectors and for the main camp, that houses women, children, elders and just people that care and love for the land and are there for one sole purpose: to protect the water.

AMY GOODMAN: Dallas, we got word that a horse had to be put down after being shot with rubber bullets by police. Is this true?

DALLAS GOLDTOOTH: This is true. When the police moved ahead to clear out the frontline camp to the far east, a number of our warriors, our horseback riders—actually, it was a really beautiful moment, is—we had a wall of police, backed by armored personnel carriers, and there was Humvees up on the hill with snipers on top of them aimed at our water protectors. And we were being pushed back, and batons are being swung, cracking over the heads and arms of our water protectors. And then we looked to the east, and over the hills to the east comes a herd of a couple hundred buffalo, bison, roaming, like stampeding towards the police line. And it was like a beautiful moment, because people saw this herd of buffalo, and this like cheer came up from the crowd, because it was like this—like almost like that our—that we were—our fight was being recognized by the four-legged nation of the bison. And immediately behind them came some horseback riders, some young riders, men and women, who were actually guiding these buffalo towards the police line in an act of resistance and defiance.

AMY GOODMAN: Dallas, before you go, can you give us the overall context of why—what happened on Thursday and Friday, why the escalated police presence, the roadblocks, the MRAP, the LRAD, you know, the sound cannons, the armored vehicles? What is taking place now? Where is the building of the pipeline happening? And has, as the Standing Rock Sioux tribal chair, Dave Archambault, said on Democracy Now! Friday—has the—asked, called for the Justice Department to intervene to stop the pipeline from moving forward?

DALLAS GOLDTOOTH: We haven’t heard any response from the Department of Justice to intervene to protect our civil rights on the ground as water protectors. There’s been silence on that end.

And right now, we’re in a dire situation, Amy. Like, the pipeline is literally within miles of the Missouri River. I mean, they can’t—at this point, cannot cross the Missouri River. But we need to do everything in our power to keep it from getting to that place. And so, in that—with that at heart, we had established a frontline camp, a treaty camp, right on the Dakota Access easement, on Dakota Access—what they call their own land, but really is our land as Oceti Sakowin people. We enacted a form of eminent domain, claiming the land back for ourselves as Oceti Sakowin folks. And we set up a beautiful encampment on that piece of property, which severely threatened Dakota Access, and, obviously, Morton County sheriff, for their intents to build this pipeline. And so they came in with a large force. And you described, you know, a lot of the equipment that was there. And it was terrifying. I mean, we had elders, women and children who were put at severe risk because of the actions of law enforcement.

A lot of folks know the Ponca leader Casey Camp. She stood in defiance, in peaceful prayer, in front of an armored personnel carrier, because she loved the land and wanted to protect the Missouri River, not just for the Standing Rock Sioux Nation, but for all nations and all people and the millions of people who depend on the Missouri River for drinking water. So this movement is not founded out of hate for the police officers or for the workers themselves, but out of love for the land and for all of us as human beings. That’s why we’re there. That’s not—our enemy is not the worker. Our enemy is not the police. It’s the corporations that are hell-bent on poisoning Mother Earth and disconnecting ourselves even further from the sacred integrity of the land and the water.

AMY GOODMAN: Dallas Goldtooth, I want to thank you for being with us. What nation, what tribe are you with?

DALLAS GOLDTOOTH: I’m Mdewakantonwan Dakota and Dine. I grew up in Minnesota, but I have family, relatives, from the Hunkpapa people, which is where the Standing Rock Sioux Nation is currently residing.

AMY GOODMAN: And an organizer with the Indigenous Environmental Network. Thanks so much for joining us, Dallas Goldtooth.

DALLAS GOLDTOOTH: Thank you, Amy. Thank you very much.

AMY GOODMAN: And folks can go to our website to see this video. Next up, we’re going to talk about what’s happened in North Dakota and the standoff, the Bundy standoff, and the acquittal that just took place. Stay with us. 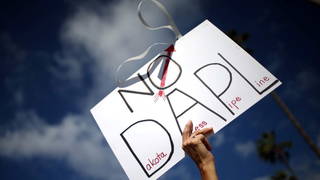