Glenn Greenwald: Why Did Trump Win? Blame the Failed Policies of the Democratic Party

As President-elect Donald Trump heads to the White House to meet with President Obama today, many in the media establishment are wondering how data journalism’s predictions of this election were so wrong. As early as Tuesday morning, many media outlets, including The New York Times, were predicting Hillary Clinton had over an 80 percent chance of winning the presidency. Those predictions evaporated as soon as the poll numbers began rolling in Tuesday night. For more on the failures of data journalism and the Democratic Party, we speak with the Pulitzer Prize-winning journalist Glenn Greenwald, one of the founding editors of The Intercept. His most recent piece is headlined “Democrats, Trump, and the Ongoing, Dangerous Refusal to Learn the Lesson of Brexit.”

NERMEEN SHAIKH: Today, President-elect Donald Trump is heading to the White House to meet with President Obama, two days after his shocking victory. On Wednesday, Obama vowed to work with Trump to ensure a smooth handover of power.

PRESIDENT BARACK OBAMA: The peaceful transition of power is one of the hallmarks of our democracy. And over the next few months, we are going to show that to the world.

AMY GOODMAN: Meanwhile, Trump’s transition team has assembled a shortlist of who would make up Trump’s Cabinet. Former New York Mayor Rudolph Giuliani and New Jersey Governor Chris Christie are among those in consideration for attorney general. Christie is also being considered for homeland security secretary, as is Milwaukee Sheriff Dave Clarke. Secretary of the interior might go to former Alaska Governor Sarah Palin or oil executive Forrest Lucas. Former U.N. Ambassador John Bolton and former House Speaker Newt Gingrich are in the running for secretary of state. Donald Trump is also expected to quickly nominate a conservative Supreme Court justice to fill the seat left vacant by the death of Antonin Scalia.

To talk more about the election of Donald Trump, we’re joined by the Pulitzer Prize-winning journalist Glenn Greenwald, one of the founding editors of The Intercept. His most recent piece, “Democrats, Trump, and the Ongoing, Dangerous Refusal to Learn the Lesson of Brexit.”

Glenn, it’s great to have you with us. Why don’t you start off by just sharing your response to what took place this week here in the United States, the election of Donald Trump and the defeat of Hillary Clinton?

GLENN GREENWALD: It’s obviously a shocking outcome, in particular because the not just polling data, but all of the self-proclaimed experts in data journalism, this new field of journalism that has arisen that claims to only view politics through an empirical lens rather than through the dirty ideologies or partisan biases that everybody else is burdened with, assured everybody that it was overwhelmingly likely that Clinton would win. Every model had her at 85 to 90 percent, and yet she lost and lost pretty resoundingly, at least on the level of the Electoral College. She obviously won the popular vote, but that’s not what matters. So, there’s a shock about the fact that all of our empirical models, all of the ways that we try and predict the future, have failed.

But then there’s an even greater shock over the fact that somebody who stands so far outside of the norms of our political traditions and ideologies is now the president-elect of the United States and in two months will be sitting behind that large desk in the Oval Office commanding a massive military—in fact, the most powerful and destructive military ever created in human history—as well as a gigantic nuclear arsenal that can destroy the world many times over, a vast spying machine that exists both on foreign soil but also domestically. And this huge apparatus of power that has been built up by both parties over the last 15 years is now in the hands of somebody who, by pretty much all metrics, is clearly an authoritarian without much regard for the constraints of Constitution or law.

And I think what we’re seeing, in the aftermath of this, is an attempt by Democrats, who nominated a candidate, Hillary Clinton, despite knowing how weak and how vulnerable and how deeply unpopular she was across many sectors in the country, who nonetheless insisted on nominating her in the face of all sorts of empirical evidence that she would not only lose but could literally lose to anyone, that those very same people who insisted on marching behind her are now attempting to blame everyone they can find—except, of course, themselves—for this debacle. And I think that if we’re going to have any kind of constructive discussion in the aftermath of Trump’s victory, it has to include, first and foremost, a discussion about why the Democratic Party has become such a small minority party, a minority in the House, a minority in the Senate, lost control of the White House to someone like Donald Trump, is obliterated on the state and local levels. What is it about the Democratic Party that has caused huge portions of the American voting population to turn their back to it and to reject it? And I think we’re seeing Democrats scrambling around, trying to avoid that discussion by casting the blame on everybody else. And I think that will only ensure that this kind of event will continue to replicate itself in the future.

Glenn Greenwald: Bernie Sanders Would Have Been a Stronger Candidate Against Donald Trump

NEXTGlenn Greenwald: Bernie Sanders Would Have Been a Stronger Candidate Against Donald Trump 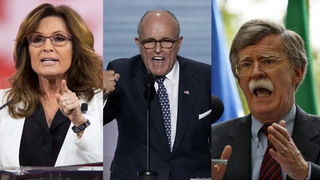