Larry Cohen, who served as a senior adviser to Bernie Sanders and is now the board chair of Our Revolution, says Donald Trump’s appointment of Breitbart News’ Steve Bannon as his chief strategist means he has “an enemy of the people, a divider of the nation” in a leading position in his administration.

AMY GOODMAN: This is Democracy Now!, democracynow.org, The War and Peace Report. I’m Amy Goodman. We’re broadcasting from Marrakech, Morocco, from the U.N. climate summit, the COP 22, where every few words, as you walk down the lanes here in a makeshift encampment of thousands of people talking about climate change, well, you can’t go too far without hearing the name Donald Trump, no matter where people are from. We’re going to turn now to look at how Bernie Sanders and the Democratic Party are planning to deal with a Trump presidency.

We’re joined by three guests: here in Marrakech, Morocco, Kevin de León, president pro-tem of the California State Senate, and joining us in Washington, D.C., two guests, RoseAnn DeMoro, executive director of National Nurses United and the California Nurses Association/National Nurses Organizing Committee, and Larry Cohen, who served as a senior adviser to Bernie Sanders and is now the board chair of Our Revolution. Larry Cohen is the former president of Communication Workers of America.

Larry Cohen, let’s begin with you. We heard what—what Senator Sanders had to say, first calling for Donald Trump to immediately—to immediately make sure that Steve Bannon no longer works for him. Your thoughts?

LARRY COHEN: Well, I think, you know, we view Steve Bannon as, literally, an enemy of the people, a divider of our nation, a person who projects hate instead of the unity that Donald Trump has even talked about. So I would start there, but I would also say that, you know, Our Revolution’s board met face to face for two days earlier this week, and the number one thing to come out of that is that we will resist any attacks on immigrants that are here, on—any hate crimes, and we will stand together, that we will not let Donald Trump silo us up, come for us one at a time, unions and then LGBT and then immigrants. We will stand together, and we aim to unite the 5 million people that are active in Our Revolution around that kind of resistance. 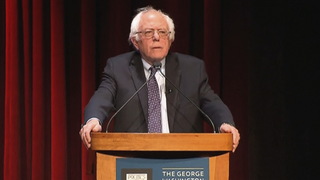