Cuba has begun nine days of mourning following the death of revolutionary leader and former President Fidel Castro, who died Friday at the age of 90. In Havana, tens of thousands of people lined up to pay their respects to Castro, who launched the Cuban revolution to oust the U.S.-backed Cuban dictator, Fulgencio Batista, and went on to lead Cuba for nearly a half-century. On Monday night, Democracy Now!’s Amy Goodman sat down with Vermont Senator Bernie Sanders for an interview in front of a live audience at the Free Library of Philadelphia, where he spoke about the life and legacy of the revolutionary leader Fidel Castro.

AMY GOODMAN: And I know we just have a few minutes, but this is an historic period. Fidel Castro just died on Friday at the age of 90. During the campaign, Hillary Clinton tried to redbait you by raising your support of the Sandinistas and talking about you being favorable towards Fidel Castro. But I was wondering if you could talk about the significance of the life and legacy of Fidel Castro and talk about the U.S. in relation to Latin America today.

SEN. BERNIE SANDERS: Well, it’s not just Latin America. You know, I think what we can say—and I’ve been to Cuba two or three times. I think Jane and I went in 1989 for the first time, and I’ve been back a couple of times, and Jane had some educational work in Cuba. A lot of positive things that can be said. Their healthcare system, for a Third World country, is quite good. It’s universal: All people have healthcare without any expense. Last time I was there, I visited a hospital, where they do very, very serious and good work. They come up with a lot of new drugs, actually, in Cuba, I believe. Their educational system is strong. But in truth, their economy is in pretty bad shape. And in truth, you don’t do very well if you dissent in Cuba.

So I think, you know, if you look over Castro’s long life, he overthrew a terrible dictator, supported by the United States of America, Batista. Some very positive changes came about. And we can argue 'til the cows come home to what degree American interference created the kind of society that exists in Cuba today. So that you could say there are some positive things in Cuba, some very negative things. Fifty years after the revolution, people still can't dissent with freedom. The economy is terrible.

But I think it raises the question—I was on a Sunday show yesterday, and somebody was raising a quote that I made about Castro 30 years ago. And, you know, somehow, they have decided that Fidel Castro is the only—that Cuba is the only nondemocratic country in the world. See, Saudi Arabia is fine. Many other countries in the Middle East are fine. And what we need to do, as a nation, is really start educating the American people. You know, Amy, I’m sure, that in 1954, way back when, we overthrew a democratically elected government in Guatemala, which unleashed decades and decades and decades of horror in that country, supported terrible people in El Salvador. We engineered the overthrow of Salvador Allende in Chile, democratically elected, the first time a person democratically elected in Chile was overthrown through the United States and the CIA. But those issues somehow don’t quite make it onto ABC. But I think it is important to understand our role in the world. In Iran, we overthrew—what was it? 1954?—Mr. Mosaddegh.

SEN. BERNIE SANDERS: '53, Mr. Mosaddegh. And how many people are familiar with that? Did people know that? Good. Not a lot of people—certainly, young people don't know that. But in 1953, at the bequest of British oil companies, the United States government helped engineer a coup of a guy who was democratically elected, who was thinking about nationalizing some of the oil industry there. He was replaced by the shah, who turned out to be a very brutal, brutal man, which then resulted in what we have today with Khomeini coming to power. But these are issues that virtually do—correct me if I’m wrong. Have you seen many shows about that on NBC? You know, it’s just not something to be talked about.

AMY GOODMAN: Let me ask you two last questions. The electors of the Electoral College, do you think they have a special role to play, given that Hillary Clinton, it looks like, will have something like, as you pointed out, two-and-a-half million more votes than Donald Trump?

AMY GOODMAN: And your thoughts that Donald Trump said that he would have won the popular vote but for the millions of people who voted illegally?

SEN. BERNIE SANDERS: I know this will shock you: I personally do not believe every single thing that Donald Trump says. No, but I did mention in my remarks that that was a—you know, this is—we can go back and look at all of the totally absurd and nonfactual statements that Trump made. You know, and I am not a guy in politics who really likes to attack viciously my opponents. It’s not my style. But I felt obliged during the campaign to say something that was just patently true, and that is that Trump is a pathological liar. And, you know, I mean, he was saying—and the danger is, it may be—you know, everybody lies. You know you’re lying. But I fear very much that he may be not even knowing that he lies, that he believes that he saw—the only person in the world who saw in New Jersey Muslims on a rooftop celebrating the destruction of the twin towers, the only person in America who saw it, and he’s utterly convinced that he saw it. And he may well be convinced of that. It may not be a lie; he may believe that he saw that.

Will We Be Feeling the Bern in 2020?: Sanders on Whether He’d Ever Run for President Again

NEXTWill We Be Feeling the Bern in 2020?: Sanders on Whether He’d Ever Run for President Again 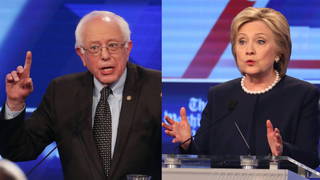