Cornel West on Keith Lamont Scott Case: Yet Again an Officer Gets Away with Killing a Black Man

In Charlotte, North Carolina, people took to the streets Wednesday night to protest the announcement that police officer Brentley Vinson will not face charges for fatally shooting African-American father Keith Lamont Scott. We talk to Cornel West about the Keith Lamont Scott case and the national issue of police brutality.

NERMEEN SHAIKH: In Charlotte, North Carolina, people took to the streets Wednesday night to protest the announcement that police officer Brentley Vinson will not face charges for fatally shooting African-American father Keith Lamont Scott. At least four people were arrested as protesters marched with signs reading, quote, “How to get away with murder: Become a cop,” unquote.

PROTESTER 1: Y’all kill us dead in the street. You incarcerate our brothers and—

AMY GOODMAN: Keith Lamont Scott’s killing by police in September sparked massive protests in Charlotte and nationwide. Scott’s family says he was reading a book in his car in the parking lot, waiting to pick up his son after school, when he was approached by police officers. The dashboard camera video of the interaction, which was released after the protests, shows Scott exiting his vehicle and taking steps backwards with his arms at his sides. In the video, police fire four shots at Scott as he falls to the ground. In October, an independent autopsy ruled the shooting was a homicide.

NERMEEN SHAIKH: But on Wednesday, Mecklenburg County District Attorney Andrew Murray announced the officer, Brentley Vinson, who is black, will not face charges and that the shooting was justified.

DISTRICT ATTORNEY ANDREW MURRAY: After a thorough review and given the totality of the circumstances and credible evidence in this case, it is my opinion that Officer Vinson acted lawfully when he shot Mr. Scott. He acted lawfully.

AMY GOODMAN: Mecklenburg County District Attorney Andrew Murray went on to say the investigation found Scott had a gun at the scene of the shooting, although he admitted there was no evidence that Scott actually raised the gun at officers. North Carolina is an open-carry state, which means it’s legal to carry a gun. In a statement, Scott’s family members said they’re profoundly disappointed by the decision not to charge Officer Vinson, who’s been on paid leave during the investigation.

To talk more about the shooting of Keith Lamont Scott and police brutality, we’re still joined by Cornel West, professor emeritus at Princeton University, who’s headed to Harvard University, because he’ll be teaching in January. Your response to the lack of an indictment?

CORNEL WEST: We see it again. We see it again. I mean, it’s harder to send a policeman who kills an innocent civilian to jail than it is for a camel to go through the eye of a needle. I was just in court in White Plains with my dear brother Kenneth Chamberlain Jr.—same thing—sitting there watching all the witnesses. Here comes the jury and the judge. The death of our dear brother Kenneth Chamberlain Sr. No justice.

AMY GOODMAN: And people should go to our website to see the extensive work we did on that. But that was a man—right?—who was an Army veteran, had a medic alert necklace and, somehow, when he was sleeping, rolled over on it. The medical people, you know, called—this was not a police interaction—called—

AMY GOODMAN: —for support for him. That woke him up, when people were knocking at the door. He said he was OK, he didn’t want to open the door, not to worry. And they knocked down that door and killed him.

CORNEL WEST: And killed him. And then dragged him with the bloodstains, you know, shown on the door and so forth. But we see this over and over again, I mean. But what it generates, though—and this is something that’s a sign of hope—that we have a younger generation that is on fire for justice. They’re tired of this callousness and indifference toward the vulnerable. And it’s multiracial, it’s multigendered, it’s multisexual orientational, and it’s multireligious and nonreligious. That’s a very positive thing, because what neofascist elites are counting on is conformity and complacency. Look at Mitt Romney: “Trump is a fraud. He’s phony. His promises are worth a diploma from Trump University.” Then, yesterday: “Well, he strikes me as very wise, and I think I’d be—it would be an honor to work with him.” Just no integrity at all. But this is just not the Mitt Romneys. We’ve got to watch the Democrats. You watch these neoliberals more and more bend. You watch them start rationalizing what ought to be called into question. We’ve got to draw some lines in the sand. That doesn’t mean we demonize others, but they have to have some principles. There’s got to be some integrity, some backbone. And thank God we’ve got a number of young folk who do understand that.

AMY GOODMAN: Well, you have this case in North Carolina. At the same time, in Charleston, South Carolina, prosecutors made closing arguments Wednesday in the murder trial of the white police officer, Michael Slager, who was captured on video, just a bystander who happened to see this happen, shooting African American Walter Scott in the back as Scott ran away. He was stopped at an AutoZone parking lot, where he was going for his car, and this police officer shot him dead. Now, he was in the same jail as Dylann Roof—

AMY GOODMAN: —who now is going on trial and supposedly representing himself.

CORNEL WEST: After he kills the precious black folk in the AME Church, is taken for a hamburger on the way to jail because he’s hungry. I mean, this is the depth of more bankruptcy and spiritual blackout that I’m talking about, you see. And, of course, Breitbart, what do they do? They put the Confederate flag up after these black people are killed, and act as if somehow that’s some disinterested, nonpartisan act. And we know the Confederacy is neo-Nazi in the core in terms of its hatred of black people in defense of slavery. So that we’re dealing in times in which we have to be very clear, and we have to have plain speech, frank speech, and we have to have people who are willing to put bodies on the line. This is the kind of moment in which we live. This is not a moment for the lukewarm and the faint-hearted and the half-truths and the attempts to rationalize something that they think is so complicated when it’s very clear, and yet we have to do it in such a way that John Coltrane’s “Love Supreme” is at the center. You’ve got to be full of rage because you hate the injustice, but you can’t be hating people. You got to hate the injustice and keep the love at the center. And that’s very much what was wonderful about what you did in North Carolina. You were there because you’ve got a love for precious indigenous brothers and sisters—

Cornel West: I Am Heading to Standing Rock to Show Solidarity with Historic Indigenous Uprising

NEXTCornel West: I Am Heading to Standing Rock to Show Solidarity with Historic Indigenous Uprising 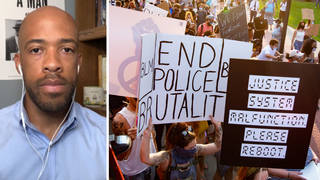