President Obama has announced a permanent ban on offshore oil and gas drilling across wide swaths of the Arctic and the Atlantic Seaboard. Obama used an obscure 63-year-old law, in a move that incoming President Donald Trump may not be able to reverse. The announcement bans all future oil and gas leases for the Arctic’s Chukchi Sea, as well as the vast majority of the Beaufort Sea. We speak to Annie Leonard, executive director of Greenpeace USA.

JUAN GONZÁLEZ: Well, I wanted to ask you, Annie Leonard, about the whole issue of President Obama’s drilling ban, recently announced, in the Arctic and the Atlantic. Could you talk about that and the significance of that?

ANNIE LEONARD: Absolutely. You know, while President Obama has been far from perfect, this was an absolutely excellent thing that he did. Obama withdrew a huge amount of land, over 115 million acres in the seas just north of Alaska and another 3.8 million acres on the Atlantic Coast between Virginia and Maine. So we’ve got the Atlantic Coast, we’ve got the Arctic, now protected from oil and drilling.

This is an absolutely fantastic thing on a number of fronts. One is, it matches the science. The science is extremely clear that we need to keep oil in the ground. Drilling in the Arctic is very expensive, it’s very dangerous, it’s very hard. That’s why no company has been able to do it successfully. If we’re going to leave oil in the ground, which all the scientists say we need to do, let’s start with the most dangerous places to drill. So, leaving that oil in the ground in the Arctic makes absolute scientific sense.

The science merits it, but it also makes activist sense. It is a great validation for activism. Over the last many years, Greenpeace, many of our allies, indigenous communities in the Arctic, people literally all around the world had been pressuring Obama to protect the Arctic. And so this is an enormous validation of citizen activism. When you have sound science and you have strong activism, you can win victories. And that’s what this was.

JUAN GONZÁLEZ: But what would be the prospects of this ban being maintained? It goes back to a 1953 law that Congress passed. What’s the potential for either Trump to remove it or for Congress to overturn it?

ANNIE LEONARD: So, this 1953 law, the Outer Continental Shelf Lands Act, this law specifically gives presidents the right to withdraw land from use. So, he—any, he or she—any president could withdraw the land from use. It does not give the president the authority to put that land back into use. So Obama has withdrawn the land. In order to reverse it, there would need to be an act of Congress to actually put the land back into use. I’m sure that Trump is going to try. The American Petroleum Institute is already trying to undermine this pledge. But it would be a very difficult and unprecedented act to reverse it. No president has ever been able to reverse some land that has been protected in this way. So, while it’s not permanent—you know, there is nothing in U.S. politics that’s permanent—it’s pretty darn close. And ultimately, it’s up to us. It’s up to people power. It’s up to the engaged citizens that got this protected. It’s up to us to continue to protect it and make sure that it never does get overturned.

AMY GOODMAN: Annie Leonard, the Chamber of Commerce may well sue the Obama administration, and Republican lawmakers from Alaska are saying they’re considering legislative efforts to overturn it.

ANNIE LEONARD: Right. And if anybody tries to overturn this, if Trump tries to overturn it, we will sue Trump. We have very good lawyers in the environmental movement. We have the law on our side in this case. But it’s not just the law on our side. We’re very confident in the law, and we will sue, and we will win. But it’s also science and economics. I mean, it just doesn’t make sense to drill for oil in the Arctic. Any oil drilling that would be done up there, the oil wouldn’t be available for 10 to 15 years. In 10 to 15 years, we’re not going to be drilling for new oil. The entire world is moving away from oil into a clean energy economy. And that oil is staying in the ground in the Arctic, because of the law, because of the science, because of citizen power and because of economics. It just—it doesn’t make sense to drill for oil up there.

AMY GOODMAN: So, Annie Leonard, your thoughts on Trump’s climate policies, particularly his pick of Rex Tillerson to be secretary of state?

ANNIE LEONARD: In picking Rex Tillerson, I think Trump may have found the only person with more conflicts of interest than himself. I mean, it is absolute insanity to think that the CEO of Exxon should be the secretary of state. There’s enormous conflicts of interest. Exxon has huge—billions—literally billions of dollars’ worth of oil deals in Russia, and Rex Tillerson is very close with Putin—not exactly the kind of people that we want BFFs with our secretary of state. But also, Exxon has a long history of lying to the American public. It has been revealed that Exxon knew about climate change as early as the 1970s. They believed it. They knew about it. They actually changed their business plans based on rising sea levels from climate change. They absolutely knew it was true. That same time, for decades, they spent millions and millions of dollars defrauding the American public, funding climate denialism. If you have somebody in charge of a company that knows one thing and acts one thing on their own, but then defrauds the American public, that is such a glaring lack of integrity. Why would we ever give the keys to the government to that kind of person? And that’s what Trump is trying to do.

JUAN GONZÁLEZ: But, Annie Leonard, it should be—make for interesting viewing to see the confirmation hearings of Rex Tillerson, because, under oath, he will have to answer a lot of questions, including his company’s view of climate change, which I think might—certainly conflicts with that of the president-elect.

ANNIE LEONARD: Absolutely. And that is a very small silver lining of this nomination, is that we will get Rex Tillerson under oath and that we can ask him the kinds of questions that somebody needs to be asking Exxon. The challenge is, I’m not very excited about a secretary of state that you have to get under oath in a confirmation hearing to tell the truth. I would like somebody who actually always tells the truth, who stands up strong, who has the well-being of the American public and the world’s public first. And it’s just absolutely clear that Rex Tillerson has Exxon’s profits first. We have long campaigned against the influence of the fossil fuel money in government. And with this nomination, I feel that the merger is just complete.

AMY GOODMAN: As we wrap up, Annie, Greenpeace—a group called the Greenpeace 30, several years ago, were arrested by Russia as you tried to stop drilling in the Arctic. Can you talk about Trump’s relationship with Putin, although it looks like together they may escalate a nuclear arms race, and what that work means now?

ANNIE LEONARD: Right, that was the Arctic 30. It was 30 of my colleagues from Greenpeace who were very courageously trying to stop drilling in the Russian Arctic. And you have to understand, the Arctic is such an important ecosystem. It is home to polar bears and whales. It is so important that we protect it, for that ecosystem and for the climate. My colleagues were doing peaceful protests, as Greenpeace does all around the world. They were arrested absolutely brutally. They were thrown into a Russian jail. They were faced with 30 years in prison for peacefully protesting Arctic drilling that threatens humanity. I mean, that’s the kind of leader that Putin is. While the Arctic 30 were in jail, facing the prospect of decades in jail, there are pictures of Trump shaking hands with Putin. I mean, this is not the kind of colleague that we want to have. This is not the kind of relationship we want to have with a government like that. We want a president and a secretary of state that is protecting freedom of speech, protecting the right to protest and protecting the world’s climate.

AMY GOODMAN: Annie Leonard, we want to thank you for being with us, executive director of Greenpeace USA.

The Obama administration dismantling a registry that registered a number of Muslims and Arabs after 9/11, to stop the information from getting to President Trump? We’ll have more in a minute. 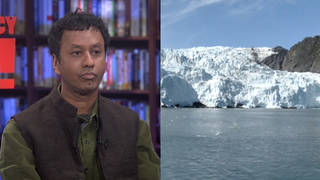