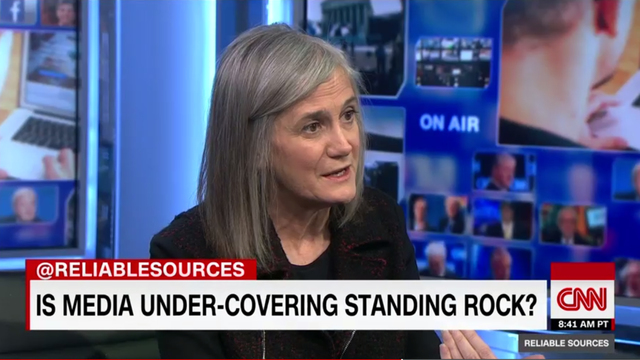 On Sunday, before the U.S. Army Corps of Engineers denied the Dakota Access pipeline company a permit to drill underneath the Missouri River, Amy Goodman spoke with media correspondent Brian Stelter on CNN’s “Reliable Sources” about covering months of resistance by Native Americans and their allies against the $3.8 billion pipeline.

This is an excerpt from Goodman’s conversation with Brian Stelter on CNN:

AMY GOODMAN: What we covered was chilling … The Native Americans didn’t expect this, it was a holiday weekend. And the pipeline guards unleashed dogs and pepper spray on the – they call themselves protectors, not protesters. Water protectors. We showed a video of a dog with its mouth and nose dripping with blood. …

Even the Justice Department has said now that they are sending observers to see. We’re talking about in sub-subfreezing weather, Native American protectors being hit with water cannons, rubber bullets, sound cannons. The violation here is extreme.

BRIAN STELTER: And the authorities might say they’re trespassing. But you say that Democracy Now, your 20th anniversary as an independent program, takes the point of view of the protesters, tries to be with the protectors?

AMY GOODMAN: What we do is what all the media should do. We are there on the ground giving voice to the voiceless.

BRIAN STELTER: Even in the day of Twitter and Facebook? I’ve been watching the protests online every day.

AMY GOODMAN: You’re right, but we have a responsibility and all the networks to also bring out these images. And this is a key issue, and it should have been covered all through this election season: It’s the issue of climate change. I mean, not one debate moderator raised that as a question. It is about the fate of the planet, and that’s what the Native Americans are standing up for right now.

The resistance camps are overflowing, thousands of people are there right now. And they are simply saying that they want to protect their water supply, the Missouri, the longest river in North America. Ten million people rely on that water. They’re not just doing it for themselves, but for everyone.

And the idea that more than 500 Native Americans and their allies have been arrested, many of them – including the tribal chair Dave Archambault II and the Native American reservation pediatrician – who were arrested for civil disobedience are put in orange jumpsuits, they are strip-searched. The violations are endless.

Watch a clip of the interview below, or click here to see the full interview on CNN.

.democracynow</a>&#39;s Amy Goodman tells <a href="https://twitter.com/brianstelter">brianstelter that covering the Standing Rock protests has been “chilling” https://t.co/FpEXxMi9mq